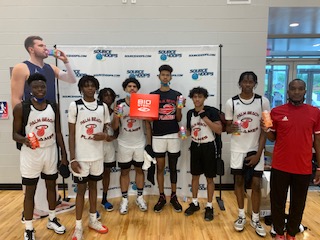 Tareeq Anderson, Palm Beach Flames 11th: A 6’6 junior at Treasure Coast, his energy and athleticism allowed him to be very productive.  Anderson was very quick to rebounds at both ends, was fast up and down the court and covered a lot of ground defensively.  Most of his points came on opportunity baskets (fast break, drop offs, offensive rebounds) in the paint.

Kimani Barnett, SFL Elite 11th: A 6’4 junior from Mater Lakes in Hialeah, Barnett is athletic and explosive.  He is very quick to the basket and routinely finishes above it.  He has a streaky perimeter shot but he hits enough of them that it forces the defense to play up, setting them up for a Barnett blow-by.  Because of his physical attributes, he has great potential to be a versatile defender

Mark Flakus, CP25 North 11th: A 6’2 junior at Jacksonville Episcopal, Flakus is all substance and no flash.  He is solid with the basketball in his hands and does a good job of running the offense.  Flakus has consistent shooting range out to the three-point line, sees the floor well and makes good decisions with the ball on the move.  A better than expected athlete, he is a good defender that understands angles and positioning so that he doesn’t get beat on drives.

Kervin Knaggs, Team T-Mac 17U: A 6’2 sophomore out of Auburndale, Knaggs had an impressive “debut”.  He manufactured points from all three levels and got teammates involved on the offensive end.  Knaggs is a very good athlete, getting by opponents quickly with the ball in his hand or using his speed and quickness on the defensive end to disrupt the passing lanes.

Nehemiah Turner, Team T-Mac 17U: A 6’8 sophomore from Auburndale, Turner’s defense is way ahead of his offense at this stage.  He has a big body and takes up a lot of space in the lane.  Turner does a good job of challenging or blocking shots and controlling his rebounding area.  At this point, Turner’s best offensive skill is that he sets a solid ball-screen that takes the screenee awhile to get around.  In time, his body will go from fleshy to firm and he will get more confident in his ability to score inside.

Jermaine Hunter, Palm Beach Flames 11th: The 6’0 sophomore out of Jupiter Christian was solid in his point guard role.  He did a good job of directing half-court offensive sets and was a ball-hawk on the defensive end.  Hunter made good decisions with the ball when penetrating the defense, finding teammates for easy shot attempts or scoring creatively in a crowd.