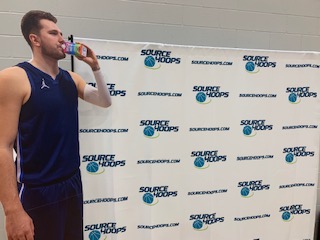 In this final “note-drop” from the Florida Showdown, we focus on some new blood; players that are wrapping up their first year of high school.

Austin White, CP25 Tampa 9th: A 6’0 freshman from Tampa Durant, White was clearly ready to go from the tip for an 8:30AM game on Saturday morning.  He showcased an accurate shot with a quick release that extend past the arc.  Just when we started wanting to see more to his game, he delivered.  White put the ball on the floor for a couple of baskets late and delivered a few nice passes on the move for easy shots by teammates.

Teddy Foster, CP25 SWFL 9th: A 6’2 freshman out of Cardinal Mooney in Sarasota, Foster plays with great pace.  He is quick but doesn’t hurry which keeps mistakes to a minimum.  Foster is a solid driver and finisher at the basket but also has a respectable perimeter shot.  We appreciated how he plays with great intensity at both ends of the court.

Jayden Dudash, CP25 SWFL 9th: A 6’4 freshman from Sarasota Riverview, Dudash already has good size for the wing to go along with a solid skill set.  A very good perimeter shooter, Dudash is also adept at scoring on the drive at the basket.  He passes the ball reasonably well and battles for rebounds at both ends of the court.  He also plays with a great deal of confidence and seemingly never backs down from a challenge.

Willie Shepherd, Showtime Ballers 9th: A 5’10 freshman from Oldsmar Christian, Shepherd has elite-level quickness with the basketball.  A blur to the rim, he excels at using hesitation moves to get his defender off balance and then either blow by or rise up for a mid-range jump shot.  Shepherd pushes the pace at every opportunity and looks to get easy baskets for his teammates and himself.  Defensively he is a very active and aggressive on-ball defender.

Alvon Isaac, Showtime Ballers, 9th: A 5’10 freshman at The Villages, Isaac is strongly built and uses his strength to attack the basket.  A very good athlete, he has very quick hands and feet on the defensive side of the floor.  He also rebounds well for his size and is usually the first one to 50/50 balls.

Alex Sessions, Tony Bradley Elite 15U: A 5’10 freshman at McKeel Academy in nearby Lakeland, Sessions is a good athlete with a lot of upside as a basketball player.  He showed he can score with a perimeter shot or slash to the basket and finish in a crowd through contact.  Sessions is a decent passer on the move and rebounds well for a guy his size.

Isaac Celiscar, Tony Bradley Elite 15U: A 6’6 freshman at Winter Haven, Celiscar is a grinder in the most positive sense of the word.  He gets by right now on toughness, athleticism, and desire but his skills are rapidly improving.  Celiscar uses his length and leap well when it comes to rebounding and defense.  Many of his points at this time come on opportunity baskets but he will score every now and then from the perimeter with a long and strong one or two dribble drive.