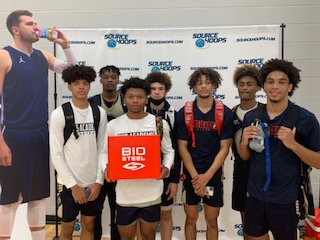 We continue our coverage of the Florida Showdown from this past weekend at the Advent Health Field House in Winter Haven.

Clarence Pierre, CP25 National 11th: A 6’8 junior from Central Florida Christian Academy in Orlando, Pierre is long and skinny but bouncy and productive.  He is very quick off the floor for rebounds and blocked shots.  He can score on post ups and has a soft jump hook with either hand that is surprisingly consistent.  Pierre has a developing perimeter shot that will get better with time and repetition.  He is also very fast down the court, loudly puts back offensive rebounds, and can switch out and defend smaller players in ball-screen situations.

Deshawn Jean Charles, Team ME 11th: A 6’6 junior out of Miramar, Charles is a lean wing with a solid jump shot but puts the ball on the floor to get the basket and free throw line far more often.  He is another player that seeks to draw contact and get a favorable foul call from the officials.  Charles has the ability to be a grab-and-go rebounder and will often finish the break on his own.  Defensively, he is active and alert, coving a lot of ground to force turnovers.

Bryce Turner, CP25 North 11th: A 6’7 senior at Jacksonville Jackson, he is one long and athletic dude.  He had a few dunks in transition and on putbacks that good his team into the game.  Turner also connected on a couple of mid-range jumpers, raising the eyebrows of scouts in attendance.  Very active on the glass at both ends, Turner’s quick leap gets his off the court a second time before most opponents first leap.  The term upside was made for guys like him.

James Morrow, CP25 North 11th: A 6’6 junior at Jacksonville Jackson, Morrow and Turner are very similar.  He plays hard, scores around the basket, rebounds, runs the floor and challenges shots.  He plays with a great deal of energy on every possession.  A high-level athlete with length, Morrow plays bigger than his size and his skills will continue to improve.

Khamaury McMilan, PHS: A 6’1 senior from Miramar, he uses his athleticism and basketball IQ to offset the lack of a productive perimeter shot.  McMilan makes good decisions with the ball, handles defensive pressure with ease, and gets to the basket quickly where he either scores or gets the ball to spot-up shooters.  Defensively he is a ball-hawk that aggressively harasses opponents the full ninety-four feet.

Dominic Gooden, PHS 11th: A 6’1 junior from PHS Academy in Tampa, Gooden is a tough and physical point guard.  He challenges the defense to stop him from getting to the basket and puts pressure on the officials to make calls.  Gooden makes regular appearances at the charity strip and converts at a high rate.  In the past we’ve seen him consistently connect from the perimeter but this weekend the vast majority of his offense came via the drive.