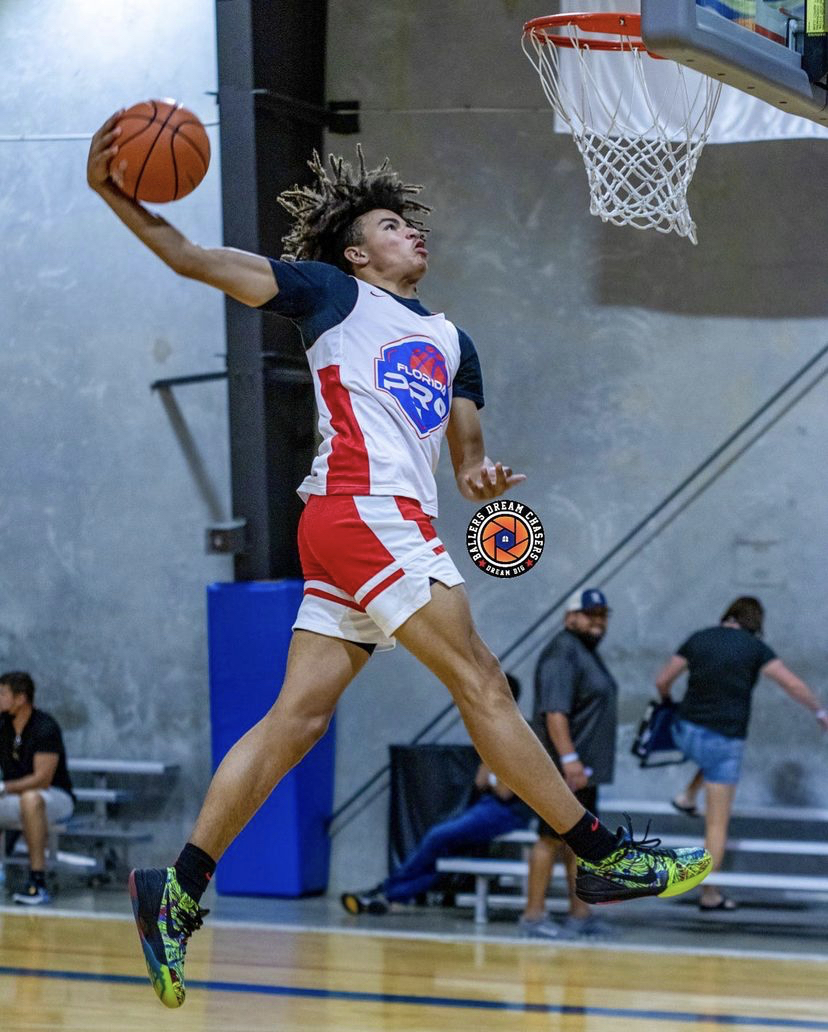 We took in the Fire & Ice Travel Team Tourney this past Saturday at the Game Point Events Center in Orlando.  Many of the top travel teams from around the state in various age groups took part.  In this first report, we will focus on a pair of top teams in the 17U Division.

This group out of South Florida should be on every college coach’s watch list.  The team already has a pair of D-I commitments (UCF) in 6’3 junior wing Taylor Hendricks and 6’9 junior combo forward Tyler Hendricks, both from Calvary Christian in Fort Lauderdale.  Taylor is a solid perimeter shooter, particularly off the catch.  However, he is becoming a more potent threat when driving to score.  Tyler has the skills to play inside and out.  He has good length and leaping ability, some basic post moves to score with down low and the ability to stretch the defense with his perimeter shot.  He also is a solid presence on the defensive end with his ability to alter shots in the lane as well as clean up missed shots and quickly start the break.  Florida Pro also boasts the Thompson twins out of Fort Lauderdale Pine Crest.  Amen Thompson, 6’5, and Ausar Thompson, 6’5, have stated their intent to play together at the next level.  Expect that level to be high-major if not “blue blood” elite level. These two play the game with a sixth sense that is simply hard to describe but beautiful to behold.  While neither twin is considered a “knock down” perimeter shooter, defenders can’t simply back off of them as each is too good at attacking defenses and either scoring in traffic or finding an open teammate for easy baskets.  Super active at both ends of the floor, both Amen and Ausar quickly turn defense into offense.  Another versatile threat is 6’8 junior Andrew Akuchie out of St. Thomas Aquinas in Fort Lauderdale.  He has a potent shot out to the arc but is also a gifted finisher in transition and a high energy rebounder.  Donovan Draper, a senior out of West Palm Beach Forest Hill, is a big combo guard at 6’6.  He sees the floor well, has a high basketball IQ, makes good decisions with the ball and can score in a variety of ways.  Ryan Richardson, a 6’3 junior at Miami Country Day and Matt Cadogan, a 6’3 junior from St. Thomas Aquinas, provide valuable support off the bench.  Each handles the ball well, shoots effectively from the perimeter, and are solid defenders.

Former NBA Champion “Mo” Speights continues to develop his namesake program into one that attracts college level attention from coaches and players alike.  This team may start with players under the radar but by the end of the summer (and hopefully an NCAA “live” period), that certainly will not be the case.  We came away quite impressed with the play of Andre “AJ” Wright, a 5’10 junior from Clearwater at the point guard spot.  He showed a great feel for the game, the ability to get the ball to the right person in the right spot at the right time and a defensive intensity that is rarely matched.  In the two games we watched, he didn’t unleash a jump shot but scored on drives and in transition.  Unleashing a jumper is NOT a problem for Jamar Franklin, a 6’4 combo guard out of Rockledge.  Dropping multiple threes in both games, his shot has great form and consistency.  Franklin plays with a poised demeanor, scores on drives and makes good decisions with the ball on the move.  He is also a good athlete than can play and defend multiple positions.  C.J. Lee, a 6’1 junior from Clearwater, is a quick and athletic guard that scores at all three levels.  He pushes the pace and loves to challenge his opponent when on defense.  JaKobe Williams, a 6’2 senior out of Jacksonville Paxon, had a solid outing.  By now, he has probably gone viral for hitting a game-winning half-court buzzer-beater against SOH Elite Saturday evening.  Williams is a scorer with excellent athleticism.  He is very difficult to keep from the basket.  Jordan White, a 6’5 junior from Rockledge and Derrick Mitchell, a 6’5 junior from Tampa Catholic, are bookend swingmen that are athletic, rebound, defend, score in transition and attack the basket off the bounce.  Each brings a great deal of energy at both ends of the court when in the game.  Mike Contiz, a 6’3 junior from St. Petersburg Seminole and Krishen Atwal, a 6’6 junior from Trinity Prep in Winter Park, spread the floor with their respective perimeter shot.  Because of his size and stronger frame, Atwal is able to impact the game with his ability to rebound the ball, especially at the offensive end.  For size, Team Speights has Trae Martin, a 6’9 senior out of Brooks DeBartolo in Tampa and 6’8 junior Jack Klinger from Lake Brantley in Altamonte Springs.  Martin is young for his class and could legitimately be in the 2022 Class.  Both guys have good post moves, rebound their area, and challenge all comers into the lane.