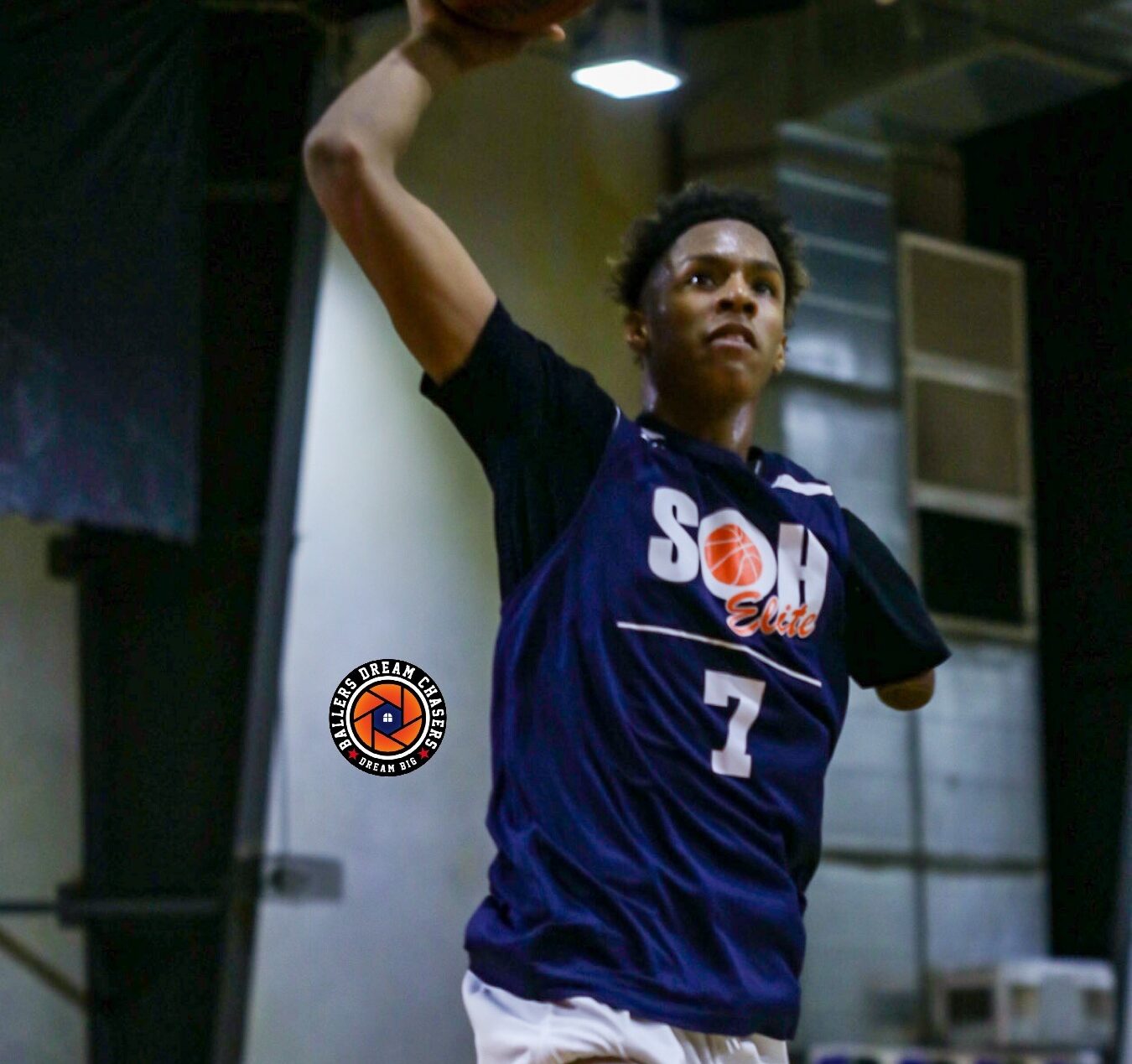 In this second report, we again focus on a pair of teams in the 17U division that sport a boatload of college prospects for a variety of levels.

The program based out of South Florida has had a rapid rise in terms of its visibility to various levels of college coaches.  SOH stands for “School of Hoop” and judging by the performance of the players, they teach the game well.  Kameron Johnson, a 6’8 senior out of Doral Academy, anchors the inside on both ends of the floor.  Well-built and strong, he controls his rebounding area, has solid scoring skills in the paint and is a physical defender.  Helping out inside is 6’8 junior Nedas Zuckawkos from Weston Sagemont.  He did well in his role as a rebounder, rim protector and ball-screener.  Jordan Cooke, a 5’10 senior from Miami Country Day, was solid in his point guard role.  He shot the ball from the perimeter, especially when the defense went under ball-screens and scored on drives over opponents in the lane.  Cooke showed very good ball control and decision making when on the move.  Helping out in the backcourt was 6’3 junior Adrian Cruz of Miami Southwest.  He impressed with his nose for the ball on defense, ability to score from the perimeter, and aggressiveness on the offensive end.  A pair of players from Kissimmee Life Christian Academy had big performances on Saturday.  Angel Montes, a 6’4 junior wing, proved difficult to contain.  He uses his size and strength to punish opponents on the way to the basket and he generally finishes thru contact.  Montes is also a threat to post up smaller guards and score inside.  His ball-handling and shooting skills are solid and he is a player that will get increased attention as the spring turns to summer.  Hansel Emmanuel, a 6’7 junior, is a very long and athletic wing.  He had a couple of dunks in transition that excited the crowd.  He was very active on the glass at both ends of the floor and covers a lot of territory very quickly when playing defense.  Matt Newland, a 6’2 junior wing from Archbishop McCarthy in Fort Lauderdale, brought energy to both ends of the floor off the bench.  The youngest member of the squad, 6’2 8th grader Sean Abeya, more than held his own with his ability to shoot the basketball from deep.

Unless this squad is playing in an EYBL event, expect to see them playing up and succeeding on the 17U level because they are that talented.  It isn’t a team with much size, but their speed, quickness, athleticism, and aggression more than make up for it.  Sean Stewart, a 6’8 sophomore from Windermere, is very quick off the floor to score inside, grab rebounds, and knock away shots.  He can also step away and score from fifteen feet.  Camerin James, a 6’6 soph from Leesburg, is a mismatch with his combination of quickness and a strong frame.  He is electric in transition, finishing above the rim.  James is also a big help on the glass.  His ability to score from the perimeter as well as take defenders off the dribble to score at the basket continues to improve.  Jason Jackson, a 6’3 sophomore at Sarasota Riverview, proved difficult to contain off the dribble.  Not only is Jackson explosive to the basket with the ball in his hands, he elevates quickly and high enough to have lob plays run for him in half-court sets.  Edgerrin James, a 6’1 sophomore at Orlando Olympia, handles and distributes well when playing the point and has the ability to score with the jumper or drive if playing off the ball.  Marvel Allen, a 6’4 sophomore at Fort Lauderdale Calvary Christian, is arguably the top two-way guard in the 2023 Class.  He has quick feet, active hands, and a lock-down mentality on the defensive end while offensively he looks to attack the basket and draw fouls at every available opportunity.  Christian Combs, a 6’0 sophomore at Kissimmee Osceola is another versatile backcourt performer.  He was solid on Saturday as a defender and distributor.  Tre Gross, a 6’2 soph from Calvary Christian in Clearwater, has a highly accurate three-point stroke as well as crafty ball-skills that allow him to break down defenses and either score or get a teammate an easy basket.  Koree Cotton, a 6’5 soph out of South Miami filled a variety of roles on the floor this past Saturday.  He has the length, athleticism and ball skills to play and defend multiple positions.  Jamari Sands, a 6’1 soph from Orlando Oakridge, stretched the defense with his shooting ability.  He was also very active on the defensive end, getting several deflections and disrupting the offense.