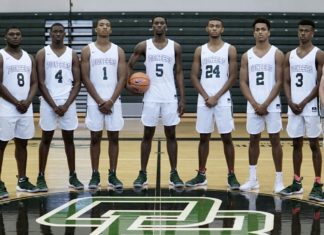 Hudson came into the City of Palms nationally ranked in the top ten while Oakridge was hoping to reach that lofty status.  Both lost heartbreaking games in the quarter-finals so both teams are aching for some redemption in this contest.

An Emmitt Williams transition basket put Oakridge on the board first but a three from Jahvon Quinerly of Hudson Catholic put them up by one.  Another basket by Williams was offset by Hudson’s Luther Mohammed.  Williams then flushed home a lob and put back an Oakridge miss to give them an 8-5 lead.  Mohammed hit one of two free throws but a bucket inside by Rob Perry of Oakridge made it a four point lead.  Quinerly hit a floater for Hudson Catholic and after one quarter of play, Oakridge led 10-8.

Marcus Taylor hit a three to open the second period for Oakridge.  Danny Rodriguez countered with a bucket inside for Hudson Catholic, which was answered with a bucket inside by Oakridge’s Antwaan Jones. Mohammed of Hudson Catholic then hit a free throw and a transition basket to make it a two point game at 15-13 with just two minutes gone in the quarter.  A bucket inside by Williams and then a transition basket from Damon Harge gave Oakridge a six point lead at 19-13.  After a pair of baskets by each team, Oakridge stretched its lead to ten after two free throws from Williams and a bucket inside from Ra’heim Sanders. Hudson Catholic was undaunted as Mohammed hit from mid-range and Quinerly connected on a floater to make the half time score 27-21 in favor of Oakridge.

A transition basket by Jones and then two free throws from Rob Perry pushed Oakridge’s lead back to ten at 31-21 early in the third.  Mohammed got Hudson Catholic on the board with a putback, but a pair of threes from Kaleb Coleman pushed the Oakridge lead to fourteen at 37-23 with just over five minutes to play in the third.  Quinerly stopped the bleeding with a floater in the lane.  Oakridge answered with a pair of free throws from Jones.  A transition bucket by Williams gave Oakridge a 41-25 lead and the Pioneers looked in complete control.  Not so fast my friend.  Hudson Catholic put together a 7-0 run, highlighted by a three from Shackyle Dezionie to get within nine.  Williams loudly put back a miss for Oakridge but Hudson Catholic put together an 8-0 run, highlighted by a three from Louis King to draw within three at 43-40.  Coleman hit a transition basket before the end of the period to give Oakridge at 45-40 lead heading into the fourth.

Oakridge outscored Hudson Catholic 6-2 to start the fourth to push the lead to nine.  A drive by Quinerly and two free throws from Mohammed made the score 51-44 in favor of Oakridge.  Quinerly scored again for Hudson and then after an Oakridge basket, hit a three.  Oakridge was able to keep Hudson Catholic at bay until Quinerly hit a three to make it a 55-52 game with just over one minute to play.  With time running out, Hudson Catholic now had to put Oakridge on the line.  After a pair of Marcus Taylor free throws for Oakridge, Quinerly struck again with another three to draw Hudson Catholic within two at 57-55.  After another pair of Oakridge free throws, Jonathan Delgado hit a three to bring the Hawks to within one at 59-58 with seven seconds left.  Hudson Catholic fouled Damon Harge and he hit both with five seconds left. Somehow, Quinerly was able to get fouled with two second left.  He hit the first and missed the second on purpose.  Williams of Oakridge was fouled and he hit both with one second left.  A last gasp heave by Hudson Catholic fell short and Oakridge advanced to play Wesleyan Christian by the score of 63-59.

Williams led Oakridge with 24 points while Kaleb Coleman added 12 points for the Pioneers.