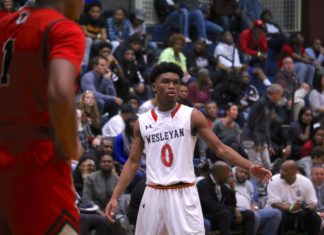 Both teams lost heartbreakers in the quarter-final round.  Both teams are immensely talented, each have multiple D-I players.  Nationally ranked at the start of the season, the winner of this contest probably stays in the national rankings while the loser may drop out, but only for a little while.

Wesleyan got on the board first with a driving basket from Jaylen Hoard.  Mater Dei then erupted.  Wilhelm Breidenbach scored inside, Spencer Freedman hit a three then scored on a drive and Reagan Lundeen scored on a drive to make it 9-2 Mater Dei, forcing a Wesleyan timeout.  A three from Wesleyan’s Drew Greene stopped the bleeding, but only for a moment.  Freedman hit a pair of threes and Michael Wang hit one as well to make it 18-5.  Wesleyan scored again but that couldn’t stop Mater Dei.  Wang scored at the basket and Breidenbach hit a three.  Keyshaun Langley knocked down Wesleyan’s first three of the game to make it 23-10 but a pair of drives by Freedman and Devin Askew increased Mater Dei’s lead.  Harrison Hornery scored in transition to make it Mater Dei 29, Wesleyan 10.  A long jumper by Wesleyan’s Aaron Wiggins made the score 29-12 after one quarter of play.

Langley and Kyre Thompson scored on drives to open the second quarter for Wesleyan.  Freedman then hit a three to double up the score, 32-16, in favor of Mater Dei.  Weselyan hit a three but Freeman responded in kind.  Thompson scored inside for Wesleyan but Mater Dei droped another three ball, again by Freedman for a 38-21 lead.  It looked like Wesleyan was dead in the water, but they suddenly found life, going on a 13-6 run, highlighted by a dunk inside by Hoard.  When the horn sounded to end the half, a blow out had turned into a ball game with Mater Dei up by nine 43-34.

Mater Dei hit the first basket of the third with a put back from Ludeen.  After a free throw by each team, Wesleyan started its climb back into the game with a mid-range jumper from Langley and a three from Shawn Walker.  This made the score 46-40.  After a mid-range shot from Devin Askew of Mater Dei, Hoard hit two free throws and Drew Green hit a three.  All of a sudden it was a three point game at 48-45! A pair of Wesleyan baskets were offset by the same from Mater Dei.  Green of Wesleyan scored in transition to get within one and then Wesleyan took its first lead since 2-0 with a three from Aaron Wiggins.  Mater Dei tied the score at 54 with a bucket inside by Michael Wang but Langley answered with a drive to end the third quarter with Wesleyan up 56-54.

Thompson of Wesleyan scored the first points of the final period to put them up four but a put back by Mater Dei’s Lundeen was their response.  A drive by Langley was offset by three free throws from Feedman to make it a 62-59 ball game.  Wesleyan continued to stay hot as Thompson put back a miss and Kobe Langley scored in transition.  A three from Briedenbach got them to within four but Wesleyan answered.  With two minutes to play and Wesleyan up eight at 72-64, Mater Dei was force to foul.  They lead only grew from there.  If Wesleyan wasn’t hitting free throws, they were beating the Mater Dei press and scoring at their own end.  In one of the more impressive comebacks we’ve seen, Wesleyan went on to defeat Mater Dei 82-73.