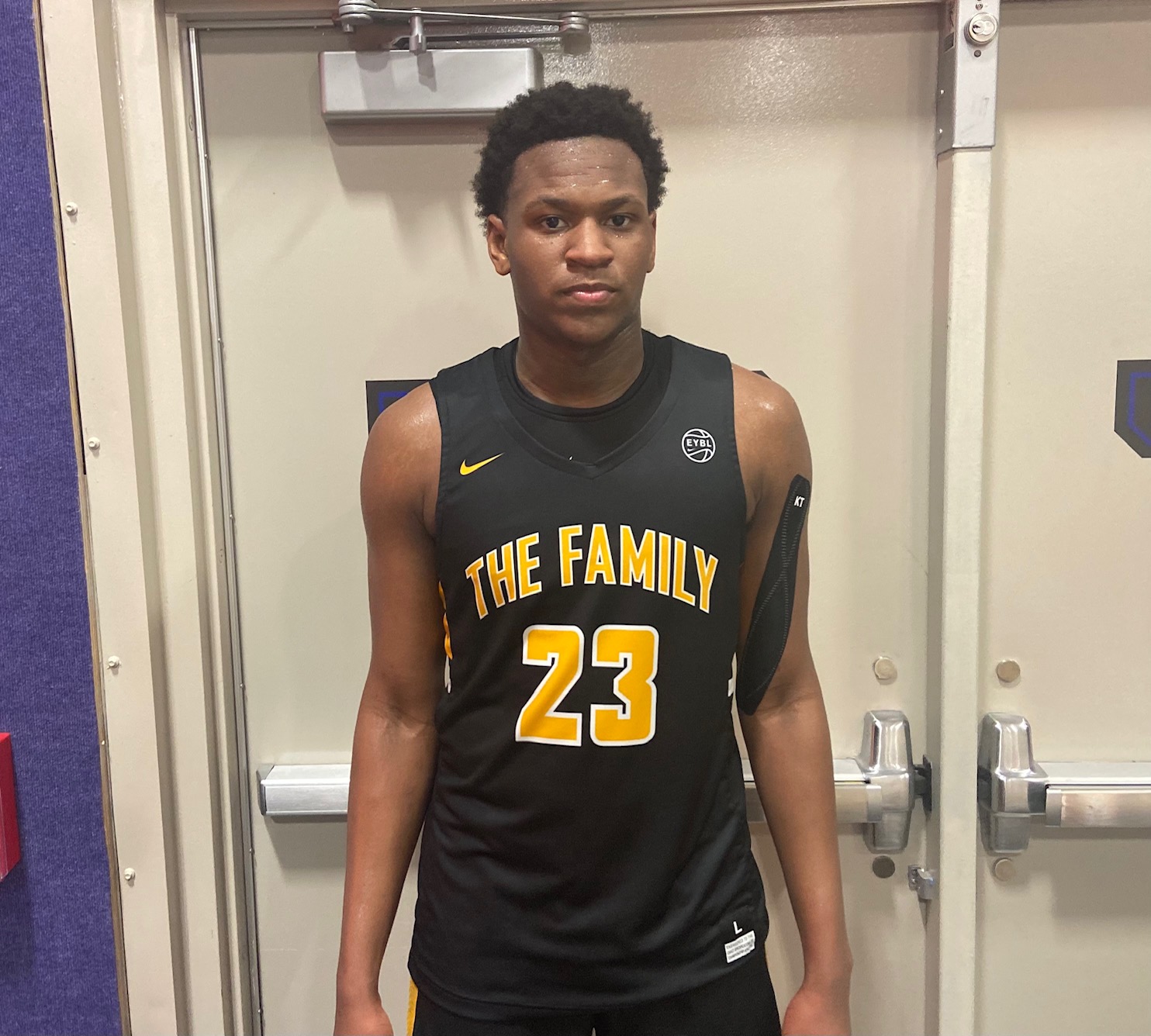 There is no question that on the grassroots level of basketball, perimeter players tend to dominate the action.  With that in mind, we take a look at some players that provided a potent punch from the perimeter at Nike’s EYBL Orlando session.

Dajuan Wagner, New Jersey Scholars 17U: The 6’2 junior from Camden, New Jersey is currently rated the top prospect in the Class of 2023 and he showed why in the Scholars opening game on Friday night.  He was simply unstoppable when it came to getting into the lane and scoring at the basket.  Wagner has a wide variety of change of pace and/or change of direction dribble moves that allow him to get by any and all defenders.  Once in the lane he can knock down the floater or make shots fading away off either foot with either hand. He isn’t afraid of contact and makes the most of his “and one” opportunities.  Wagner is also a very good shooter from distance (3-5 in that game) and it is a bit of a surprise that he doesn’t use that weapon more.  Simply relentless at both ends, Wagner is as complete a player as you will find in the current class.

Curtis Williams, The Family 17U: The 6’7 junior out of Brother Rice in Detroit, Michigan, went on a scoring spree rarely witnessed at the grassroots level on Saturday afternoon. The official stat line has him going 5-6 from beyond the arc.  From our vantage point, Williams was 9-11 from distance, so some of our “threes” must have been counted as “long twos”.  He dropped those long-range shots in from a variety of angles and distances, both off the catch and the dribble.  Williams has a quick release and is always shot-ready.  He isn’t just a shooter, as he has a solid frame and knows how to use it when driving to the basket.  Williams is a solid rebounder and can push the ball up the floor if given the opportunity.  His was one of the most impressive performances of the weekend.

Aiden Holloway, CP 3 17U: The 6’0 junior attends La Lumiere in Indiana and pretty much had his way with the opposition on Saturday afternoon.  His speed, quickness, ball-skills, court vision and decision-making combine to make him a high-level point guard.  However, Holloway is such a good shooter from deep distance that he can also be effective playing off the ball.  He excelled in both roles on Saturday.  Holloway pushes the pace whenever possible and does a good job of getting his teammates involved.  Despite his size, he has developed a knack for scoring at the rim in a crowd through contact. Defensively, he is a pesky on-ball defender and is disruptive in the passing lanes.

Marvel Allen, TSF 17U: The 6’4 junior from Fort Lauderdale Calvary Christian pulled double-duty on Saturday as he led his high school team to the inaugural State Champions Challenge in Tampa then drove up I-4 to help TSF (The Skill Factory) get a win in the final game session of the night.  Allen has been a household name in Florida since he was in the eighth grade but over the last year or so his national reputation has skyrocketed.  A tough two-way guard, Allen is physical and relentless on both ends of the floor.  While there is still work to be done when it comes to the consistency of his perimeter shot, Allen excels at getting to the hoop, making tough shots, drawing fouls, and converting his “and one” opportunities.  He is a good ball-handler, unfazed by pressure, and gets the ball to his teammates where they can use it.  Defensively, his mindset and desire are just as impactful as his active feet and hands.

Kanaan Carlyle, TSF 17U: The 6’2 junior from Milton in Atlanta, Georgia has already committed to Stanford and no doubt they will take him as soon as they can get him.  He has the burst and ball-skills to get past the vast majority of defenders but Carlyle’s ability to knock down perimeter shots separates him from his peers.  His mid-range game off the dribble is lethal and he has NBA-level three-point range.  Carlyle is also effective in running ball-screen action.  Defensively he is solid and always alert when the ball comes into his area.

Isaiah Collier, TSF 17U: A 6’3 junior from Marietta Wheeler, Collier and Carlyle have been playing together since the seventh grade and their chemistry is quite evident on the court.  Of the three-headed monster that is the TSF perimeter, Collier is arguably the best distributor.  He sees the floor well, is alert for cutters in the lane and teammates running the floor in transition and makes the right pass vs. shot read when on the move.  While his jumper wasn’t falling in the game we took in, it has good form and follow-through, so it was most likely just an off day.  Collier has broad shoulders but also a decent dose of quickness and he combines those two to break down the defense and get to the basket, often earning a trip to the free throw line.

Tahaad Pettiford, New Heights Lightning 17U: A 6’2 guard from Hudson Catholic in New Jersey, Pettiford is in the 2024 Class.  He looked very comfortable playing up and was the catalyst for the Lightning’s win in the final game session on Sunday.  Though he was unable to get his perimeter shots to fall, Pettiford had zero issues with putting defenders in a knot to get to the basket and score.  Surprisingly fast and athletic, he had a couple of finishes above the rim that seemed to surprise the gallery of college coaches watching the game.  A good decision-maker while going at top speed with the ball, Pettiford makes his teammates happy with the way he delivers the ball at the right time to the right place.  He is very quick to convert steals into scores on the defensive end.

Kenyon “K.J.” Lewis, Drive Nation 17U: The 6’5 junior from Chapin, Texas, just outside El Paso, may have been the strongest perimeter player in the event.  His body is chiseled, he has wide-shoulders, and defenders just seemed to bounce off him when attempting to keep him from the rim.  Lewis has great body control and touch in traffic.  He spends a lot of time at the free throw line and makes a good majority of his opportunities there.  Lewis’ strength and athleticism allow him to play bigger than his size, especially when it comes to rebounding at either end of the floor. His jump shot looks solid, it just didn’t go down in the game we watched on Sunday.

DeShawn Harris-Smith, Team Takeover 17U: A 6’4 junior from Paul VI in DC, DHS is a multi-faceted guard that does a little bit of everything as his Sunday stat line of 13 points, 5 rebounds, and 3 assists will attest.  He has a solid frame, good run/jump athleticism and both a high skill level and hoops IQ.  Harris-Smith showed versatility as a scorer, connecting on perimeter jump shots via the catch or the dribble, dropping floaters over bigger defenders around the basket and a reliable touch from the foul line.  He is a very good rebounder for a guard and is quick to push the ball up the floor once he secures the missed shot.  Defensively he is quick enough to defend smaller players while also strong enough to battle bigger foes inside.

Richard “Tre” Johnson, Team Griffin 17U: A 6’6 sophomore from Lake Highlands in Texas, Johnson is currently considered one of the top five players in the Class of 2024.  He got off to a slow start in the Sunday 8AM game we took in (who wouldn’t) but as the game progressed he became more proactive and productive.  Thin but long and bouncy, Johnson is a terror in transition.  He is quick to convert from defense to offense, finishes well above the rim, and is willing to absorb contact to get points.  Johnson’s perimeter shot seemed a bit streaky at this stage of his development but the mechanics are solid which bodes well for the future.  An active rebounder at both ends, his second and third leaps are just as quick as his first and he relentlessly pursues the ball until it is secured.  Because of his physical gifts, Johnson has all the makings of being disruptive defender both on and off the ball.

Jaylin Stewart, Seattle Rotary 17U: A 6’6 junior from Seattle Garfield in Washington state, he looks to be a guy that can swing between the “two” and the “three” at the next level.  He has a good frame and uses it to carve out space inside for points in a crowd.  Stewart also has enough burst with the ball to get by defenders out on the perimeter or in the open court.  His perimeter shot is also developing rapidly as a weapon.  We thought he rebounded well in a crowd and wasn’t intimidated going up against bigger or stronger opponents on the defensive end.

Dusty Stromer, Team Why Not 17U: If the 6’6 wing out of Los Angeles (Notre Dame HS) California, had blond highlights, he could easily star as “Spinnelli” in a remake of “Fast Time at Ridgemont High”.  However, the kid is an impressive baller.  He is a far better athlete than one expects.  Stromer has deep range on his shot but also has the ball-skills and quick shot release to create his own opportunities when putting the ball on the floor.  He makes good decisions coming off ball-screens and is quick to take advantage of any miscues by the defense.  Defensively, Stromer is solid and is a willing rebounder that is quick to loose 50/50 balls.

Solomon Ball, Team Melo 17U: A 6’3 junior at the St. James School in Baltimore, Maryland, Ball had a breakout performance on Saturday morning vs. in-state rival Team Durant.  He opened up the contest with a fierce dunk in transition then a bit later converted a three off the dribble and from there it was all gas, no brakes.  A high-level athlete, Ball had one spectacular offensive putback where he grabbed the rebound on the way up, cocked the ball back behind his head, then threw down a dunk over surprised opponents and teammates. A good straight-line driver with a quick first step, Ball is tough to keep from the basket. When his jumper is falling like it did this time out, it almost isn’t fair.  He covers a lot of ground defensively and is alert for any lazy passes into his area.