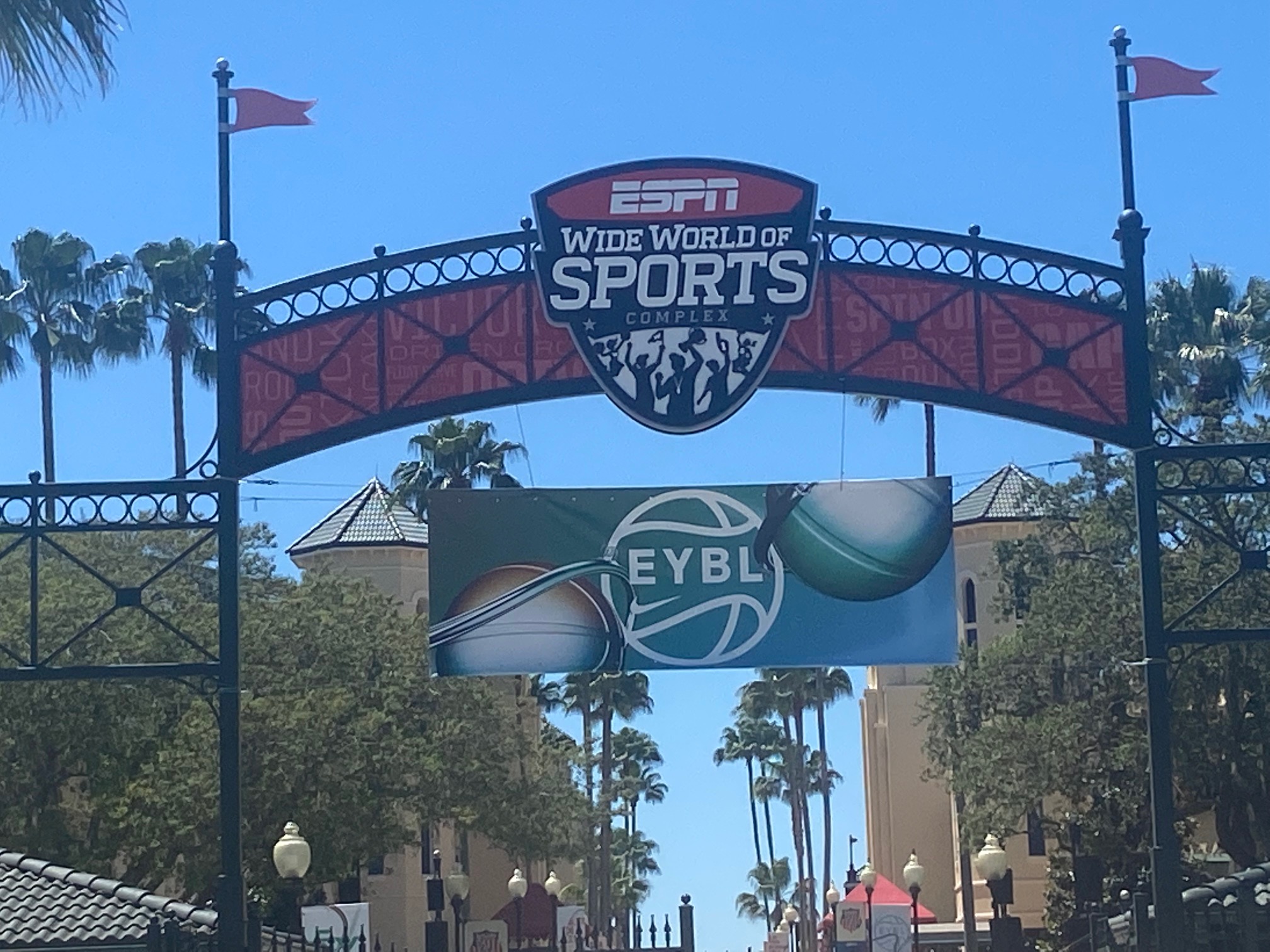 While the shift in emphasis to the three-point shot has changed the game in favor of perimeter play, there is still plenty of opportunity for “bigs” to make their presence felt on both ends of the court.  At a talent-rich event such as the EYBL Orlando this past weekend, there were more than a few guys with size that made an impact in the games we took in.

Brandon Garrison, Team Griffin 17U: The 6’9 forward from Del City, Oklahoma was impressive in a Sunday morning matchup against Nightrydas Elite.  His physical traits in terms of length and athletic ability are at the higher end of the spectrum.  Garrison also plays with great energy and effort on every play at both ends of the floor.  He changes ends quickly, scores well around the basket, and is a force when it comes to rebounding the basketball at both ends as well as protecting the rim on defense.  Garrison surprised onlookers when he dropped in a three late in the contest.  Should that become part of offensive arsenal, the sky is the limit.

Gregory “G.G.” Jackson, Team CP3 17U: A 6’9 forward from Ridge View in Columbia, South Carolina has by all reports played very well in the early spring and some national pundits are promoting him as a candidate for the top spot in the 2023 Class.  Jackson certainly has all of the physical tools that make him a high-level prospect: he has a solid frame that can add strength and not take away from his athleticism; he leaps high and quick in a crowd to secure rebounds; he is fast down the floor in transition, and moves well laterally to defend on the perimeter.  For a guy his size, Jackson handles the ball very well and is a reliable shot maker on the perimeter out to the arc.

Ron Holland, Drive Nation 17U: A 6’8 forward from Duncanville, Texas, Holland is another candidate to grab the top spot in the 2023 rankings.  A combo forward with rapidly developing wing skills, he can grab a rebound, push the ball up the floor, then make the right shot vs. pass read for points.  Holland handles the ball well in the half-court, finds teammates for open shots, and scores well in traffic thru contact on drives to the basket.  As his jump shot gains consistency from behind the line, Holland will become much harder to guard.  He gives great effort at both ends of the floor, rebounds out of his area, and has the defensive versatility to defend any and all positions.

Aaron Bradshaw, NJ Scholars 17U: A 7’0 center from Camden, New Jersey, Bradshaw doesn’t get much offense run for him but still finds ways to put up points on lobs, putbacks, and in transition.  A bit on the thin side, Bradshaw is a good run/jump athlete for a player his size.  He is quick to come over and block shots, is surprisingly fast down the floor, and uses his long arms well to disrupt the passing lanes.  In the Friday night game we took in, he attempted a three but missed and didn’t have any post-up opportunities.  His defense is ahead of his offense for now but there is a bundle of potential in the athletic seven-footer than is hard to pass up.

Devin Williams, Team Why Not 17U: A 6’10 forward from Centennial of Corona, California, Williams may not have gotten the starting nod in the team’s game against The Family out of Michigan but made his presence felt once he entered the contest.  Lithe and lanky, Williams surprises with his ability to rebound in a crowd and he is especially active on the offensive glass.  Though he missed the three perimeter shots he took in the game, those shots had good form and reasonable chance of going down so that area should improve with time.  Williams is quick to change ends of the floor, is an effective rim protector, and a guy whose best basketball is still in the future.

Amani Hansberry, Team Durant 17U: A 6’7 forward from Mt. St. Joseph’s School in Maryland, Hansberry may not have the bouncy athleticism that some other players on this list have but he has great touch around the rim, a variety of post moves, and the ability to score with either hand inside.  At times he will put defenders in the spin cycle down on the block and at others he will drop in a jumper from the free throw line.  Hansberry will also score with one or two-dribble drives from inside the arc.  A good but not great leaper, he corrals more than his fair share of rebounds using his wide frame to control his area and pursue the basketball.  Defensively, he plays physical and doesn’t back down from a challenge.

Milan Momcilovic, Team Herro 17U: The 6’8 forward from Pewaukee, Wisconsin clearly graduated at the top of his class at the Kevin McHale/Dirk Nowitzki School of Footwork.  Whether on the perimeter or in the post, Momcilovic used a variety of pivots and fakes to create openings for shots.  His first bucket of the day on Sunday against Drive Nation was a mid-range fadeaway ala Dirk, then later he left a defender flat-footed with a step-back dribble and jumper.  In the post, Momcilovic finds ways to score over, under, or around defenders.  He has a quick release on his jumper and is accurate with it out to the arc.  Momcilovic is not just a scorer as he finds open cutters and spot-up shooters, rebounds his area, and puts in work on the defensive end of the floor.

Arrinten Page, TSF 17U: A 6’9 forward from Wheeler in Marietta, Georgia, Page certainly passes the look test with his solid frame and long arms.  On the court he has a hefty dose of athleticism, gets off the floor quickly for boards and blocks, and sprints the floor in transition.  Page made a couple of perimeter shots but that is clearly a work in process.  He has some basic post moves that he uses to score inside and showed he can come off ball-screens, catch the ball and finish in a crowd. Page has the physical tools necessary to switch out to smaller ball-handlers on the perimeter or hedge and quickly get back to protect the basket area.  He’s more prospect than player right now, but his potential is tantalizing.

Aaron McBride, Team Why Not 17U: The 6’7 forward from Centennial in Corona, California is one of those guys that gets great satisfaction for doing the dirty work and little things that win.  He plays with great energy and effort, seemingly comes up with every loose ball or long rebound, and never fails to sprint the floor.  McBride comes away with rebounds in a crowd and finds ways to score around the basket.  Not likely to create his own shot, McBride makes the most of any opportunities for points that come his way.  He’s a guy that coaches love to coach and opponents hate to play against.

Mouhamed Dioubate & Brandon Williams, PSA Cardinals 17U: Dioubate, a 6’7 forward from Putnam Science Academy in Connecticut and Williams, a 6’8 forward from Christ the King in New York City, are essentially mirror images of each other and bookend forward for PSA.  Right now, neither will scare teams with their perimeter shot but both can put the ball on the deck, get to the basket, and score through contact in a crowd starting from inside the arc.  Dioubate and Williams tend to earn a lot of free throws thanks to their aggressive approach at the offensive end.  Each is a vigorous rebounder at both ends as well as a physical defender.  They both have solid frames, very good athleticism, and play with a bit of a nasty streak.

Youssouf Singare, New Heights Lightning 17U: A 6’11 center out of Upper Room Christian in New York, Singare is all about what he could become rather than what he currently is.  His speed up and down the floor, leaping ability, generous wing span, and never-ceasing effort give Singare a good base from which to start.  He is an active shot blocker, rebounder, and lob catcher inside.  Singare reacts quickly to balls coming into his area and comes up with a surprising number of steals.  He doesn’t mind playing physical inside and has enough lateral speed and quickness to hedge and sprint back when defending the pick-and-roll.  Should Singare develop some scoring tools down low and/or a reliable face-up jumper to fifteen feet, his game and recruitment go to a much higher level.