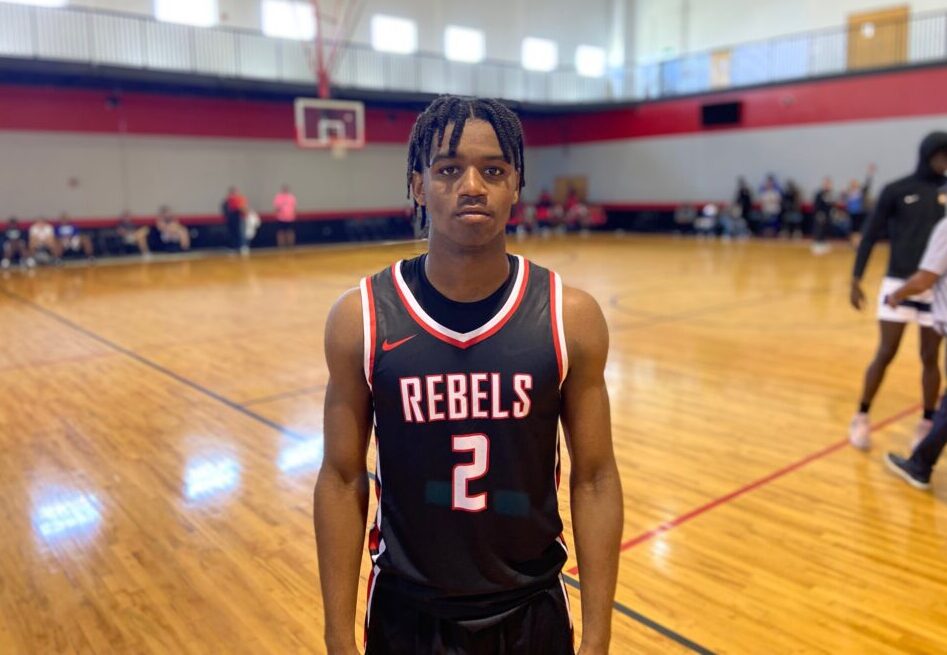 We were fortunate enough to see the three Florida Rebels teams that participated in the Orlando EYBL session a few weeks prior to the event.  This time we will focus on those players that stood out in the games we watched at the ESPN Wide World of Sports Complex.

Sean Stewart, 17U: The 6’8 junior at Windermere and Duke commit had his future college coaches at all of his games.  While he did put up some impressive numbers over the four game series (14+ ppg and 10+ rpg), it was as much as how Stewart went about achieving those numbers as anything.  Stewart gives a high-level effort every possession and really attacks the ball, both as a rebounder and shot blocker.  He elevates off the floor quickly, rebounds out of his area, and is quick to help from the weak side to challenge or change shot attempts.  Currently, he is most effective scoring from fifteen feet and in, the closer the better.  Stewart did go 2-2 from three point range against the Alabama Fusion on Saturday morning and hopefully that foreshadows better things to come in that area.  He may not be the next “one and done” guy for the Blue Devils but Stewart will certainly be a positive performer for them no matter how long he stays in Durham.

Karter Knox, 16U: We admittedly only got to see about half of a game for this version of the Florida Rebels, but it was plenty enough time to get a look at Knox, a 6’5 sophomore at Tampa Catholic, and how he continues to be the alpha dog of the 2023 Class in Florida.  He is rapidly becoming a reliable three-tier scorer as his jumper is consistent past the arc, the pull-up jumper from mid-range is going down more frequently, and he has always had body control, touch, and finishing ability around the basket. Knox doesn’t need many dribbles to get to the hoop, thanks to a quick first step and long strides.  He is very fast down the floor in transition and doesn’t fear physical contact at the basket.  With good length and leap, Knox is a grab-and-go rebounder that pushes the ball up the floor with speed.  He will dish the ball off if outnumbered by the defense but we’ve seen him beat multiple defenders on the break at the basket in the past.  Defensively he is sound as he moves his feet well when guarding the dribbler, disrupts the passing lanes, and has the ability to come over and block or challenge shots from the weak side.

Ja’mier Jones, 15U: There are probably a miniscule few that can equal Jones’ athleticism, but difficult to believe that there is a player in the 15U division that can surpass it.  The 6’5 freshman at Sarasota Riverview uses those gifts well to score ahead of the defense, put back misses with ferocity, and quickly score at the basket after a dribble or two inside the arc.  Jones made a couple of mid-range jumpers in the game we took in Friday night, but the defense gave him plenty of time and space as they feared being posterized.  Right now Jones gets by as a straight-line driver, but once he becomes more comfortable using change of direction and/or speed dribbles to get by the defense to the rim, Jones will become that much more dangerous.  He is quick to rebounds both in and out of his area and defensively he covers a lot of ground in a short amount of time, anticipates well in the passing lanes, and quickly turns steals into scores.

Jizzle James, 17U:  During the high school season at Olympia in Orlando, the 6’2 James put up points at an over 20+ per game clip.  With the talent surrounding him on the Rebels, he doesn’t have to do that and can show other aspects of his game.  Right now, James relies more on strength and leverage than speed and quickness to attack the basket or get to where he wants to go with the ball.  He can be shifty when necessary but that doesn’t happen often.  He had almost a 2:1 assist/turnover ratio this past weekend, which is certainly more than acceptable.  Most of the points we saw James put up this weekend came off converting steals into scores or in transition after teammates forced a turnover, but there were instances of him taking it upon himself to score and he was more often successful than not.  James didn’t have great success this past weekend from three-point range but we’ve seen him enough that he is a competent shooter with range.  James is solid defensively, both on and off the ball.

Dontrell Jenkins, 17U: The 5’10 junior out of Alachua Santa Fe was very good on Saturday morning against the Fusion from Alabama.  As one might expect from a sub-six footer, Jenkins is feisty and plays with a chip on his shoulder, looking for every chance to prove he shouldn’t be overlooked due to his size. He was very good at forcing turnovers and quickly converting them into points for himself or teammates.  Jenkins also had his jumper working on both sides of the arc.  He has a reliable mid-range pull-up from about fifteen feet and can knock down floaters over defenders in the lane.  Jenkins is a pesky defender, always swiping at the ball and making the opponent uncomfortable.

Marcus Allen, 16U: The 6’6 sophomore out of Miami Norland looks more skilled, polished, and comfortable on the perimeter each time we watch him play.  His movements are fluid, he’s long and athletic, and Allen plays with a bit of fire to his game.  Allen flourishes when he is able to get out and run the floor in transition or attack the basket with one to two dribbles before the defense can adjust.  He scores well with either hand around the rim.  Allen’s jump shot is becoming an increasingly reliable weapon on both sides of the three-point line.  He is also a dynamic offensive rebounder thanks to long arms and great timing for the ball coming off the rim.  Allen is a versatile defender as his length allows him to clog the passing lanes, he has quick feet to guard smaller players on the perimeter, and the mindset to play physically in the post when the situation calls for it.

Isaac Celiscar, 16U: The 6’6 sophomore from Winter Haven is another “lengthy wing” in the Florida Rebels 16U lineup that gives opponents fits.  On this squad, he makes the most of his opportunities by pursuing missed shots with abandon, sprinting up and down the floor in transition, and quickly converting from defense to offense after turnovers.  Many of those turnovers he creates on his own thanks to active hands, quick feet, a generous wingspan and the ability to read and quickly react to where the ball is going to go.  Celiscar also proved to be invaluable as a secondary ball-handler and did a good job of finding open teammates for easy shots.  His field goal percentage will most always be at or over 50% because of smart shot selection but we hope to see more of him and track the progress of his perimeter shooting.

Patton Pinkins, 15U: He got little run in the first half of the Rebels Friday night contest, but he came up big in the second half, nearly leading the squad to a comeback win.  The 6’5 freshman from P.K. Yonge in Gainesville is well-known his ability to shoot the ball from “Curryland” and he had a couple of those shots fall on Friday.  However, it was he offensive rebounding and ability score along the baseline with floaters that helped the team the most.  Down four with just seventeen seconds left, Pinkins stole the inbounds pass, hit one of those baseline floaters, drew the foul and converted the three point play to get the Rebels back to within one.  Pinkins won’t blow away onlookers with crazy athleticism but he is no slouch in that department and makes up for any shortcomings with a high hoops IQ and the ability to stretch the defense with his perimeter shooting.

Treyvon Maddox, 15U: The 6’6 wing out of South Carolina didn’t play with the team at the Rebels Invitational so this was our first time seeing Maddox in action.  Though quite thin and needing more skill refinement, Maddox has lots of physical tools that can be put to highly effective use on the basketball court.  He has quite the wingspan as well as vertical leap which allows him to get to rebounds before most opponents and put back misses on the offensive end and start the break on defense.  He appears to be more of an opportunistic scorer than a guy that can manufacturer points with drives or jumpers at this time but one of the joys of being young is there is plenty of time for improvement.  We like that he plays very fast and aggressive on the defensive end as his physical gifts make him a versatile defender and a guy that is difficult to get the ball around or over to teammates.

Sam Walters, 17U: OK, so it may not have been a great shooting weekend for the 6’9 junior from The Villages, but Walters helped the team in many other areas.  He fought for rebounds, was quick to help on defense, came up with some blocked shots, and was alert and quick to get the ball to open shooters, both near the basket and on the perimeter.  Walters can cause problems at the top of the press because of his size and he is quick to get back to his assignment on defense.

Tyler Johnson, 16U: A 6’5 wing from Oak Ridge in Orlando, Johnson gets called on more often than not to defend “bigs”.  He does an admirable job in that regard but sometimes lost is the fact they have to guard him, which is a problem.  Johnson is not only quick to the basket from the high post and short corners but also gets off the floor quickly for lobs and putbacks.  He is adept at guarding smaller, quicker players on the perimeter in ball-screen situations.  Johnson’s mid-range jump shot is reliable while his shooting from beyond the arc continues to improve.

Isaiah Campbell-Finch, 15U: The 6’0 freshman from Tampa Catholic is a catalyst that not only makes a wide variety of plays but the right play at the right time.  The lefty is solid with ball, reads the floor well, and makes good decisions on the move.  He can drive and score in traffic thru contact and knock down shots off the catch from the perimeter.  We really like how Campbell-Finch moves his feet on the defensive end.  Opponents have a tough time getting by him and when they pick up the ball, his hands are always an obstacle.  He is quick to push the pace when converting from defense to offense.