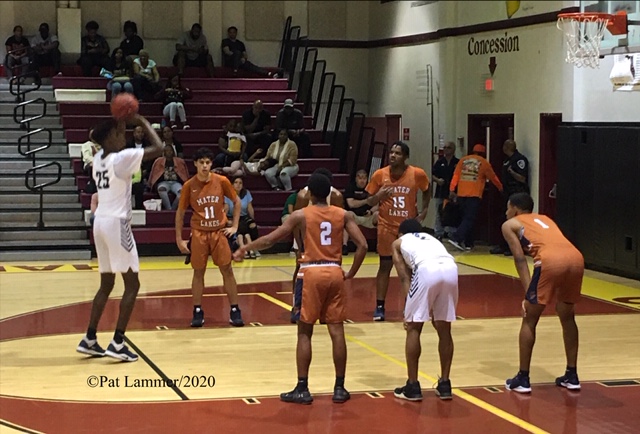 University School, which has won the past two Class 5A state championships, rolled past Mater Lakes, 77-60, in the district semifinals Wednesday. Stranahan, which won a 6A state crown this past March, eliminated Hallandale, 57-46.

“The first game was close, just pulled away at the end,” said Sharks senior forward and Michigan commit Jace Howard.

“It’s going to be a tough match-up,” sophomore big Taylor Hendricks said of Stranahan. “We played them already but we already know they are going to come 10 times harder.”

Howard and Hendricks both posted double-doubles in the U-School W over the young Mater Lakes squad. The Sharks jumped out to a 20-4 advantage and never looked back. Jace Howard had 14 points and 10 rebounds while Hendricks (pictured) had 18 & 11. The duo shot 16 free throws between the two of them.

Asked what the Sharks need to do to be able to get back to Lakeland, Jace Howard said: “It’s going to take for us all to lock in mentally and [have] no other distractions that there’s always going to be. We’re just going to have to play together. I feel like in those games — where we all know it’s a tense game, we’re out there, we need everybody — I feel like that’s when we come together the most and that’s when we play our best basketball. In these six games I feel like we’re just going to have to lock in, engage, focus on the game plan, focus on the scouting reports and just play basketball.”

“Two freshmen lead us in scoring, assists and steals this season,” said coach Lance Tejada. “That’s a lot of pressure for two guards under 5-9 to ask. I believe they handle it really well considering. We played a very competitive schedule. … I think we have a great shot at making regionals this year, so we will wait and see.”

Leonard Manuel, a 6-5 senior who is a University of Florida football commit, is no longer on the Stranahan basketball team. A school official told me that Manuel transferred this week to West Port in Ocala. Stay tuned there, with it being February of his senior year.