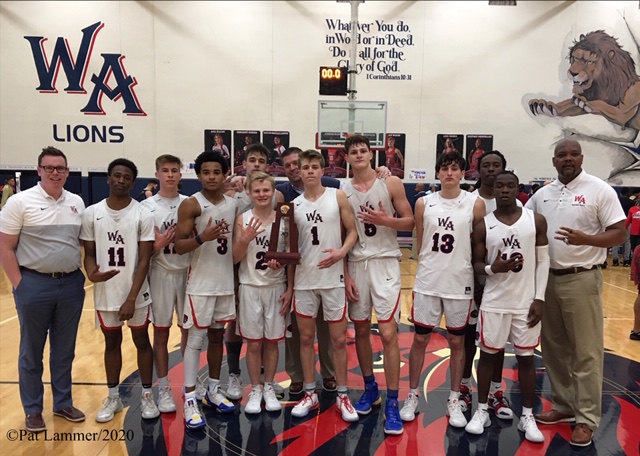 FORT LAUDERDALE — Westminster Academy avenged a regular-season loss with an 82-63 victory over Calvary Christian on Saturday night in the District 12-3A championship game at Westminster.

Calvary had defeated Westminster Academy, 79-68, back in mid-January behind five double-figure scorers.

Westminster improves to 19-8 while Calvary falls to 20-7.

Westminster jumped all over Calvary at the start. The Lions connected on five 3-pointers in the opening period to go up 23-4 after one. Aidan Abell (2022) and Caleb Muller (2021) made two each, and Troy Boynton (2021) hit one. The Eagles, meanwhile, shot just 2 for 15 from the field.

“We got off to a hot start,” Westminster coach Ehren Wallhoff said. “They got off to a hot start in the first game against us in the second quarter, took a lead. We took a lead this game … just kind of roles reversed. We were happy to just be able to continue to slow them down a little bit because when they get going, they are a tough team to beat.”

At halftime, Westminster standout sophomore center Ben Middlebrooks had zero made field goals and 3 total points. Most opponents would be ecstatic to be sitting in that position. But the Lions still held a 40-21 advantage, thanks to the foursome of Abell, Boynton, Muller and Steph Swenson. Those four combined to score 35 of Westminster’s 40 points.

“What we’ve been working on all year is [for] some of our sophomores and juniors to step up,” Wallhoff said. “Ben creates a lot of attention. Our sophomores are starting to figure it out. They’ve been all year but now they’re getting to where they make good decisions, shot selection, things of that nature.”

Swenson, who is headed to Stetson, scored a game-high 23 points and grabbed 10 rebounds. The shifty point guard continually caused Calvary problems by driving and dishing to open shooters. Westminster would hit seven 3s in the game. Swenson also made 8 of 11 free throws.

The 6-10 Middlebrooks, a high Division I prospect, finished with 16 points and 11 rebounds. Twelve of Middlebrooks’ 16 came from the free-throw line. Boynton contributed 17 points and Abell 11.

Sophomore high-Division I prospect Gregg Glenn scored 10 points in the first half but was plagued with foul trouble down the stretch. He took just 4 shots over the final two quarters and finished with 12 points. Glenn scored 24 in the regular-season meeting.

“They played well,” Calvary coach Cilk McSweeney said of Westminster. “They handled our pressure a little bit better. We closed it within seven but we just couldn’t [get over the hump].”

ANOTHER TROPHY FOR THE CASE

Westminster Academy is gunning for its fourth consecutive state championship under Wallhoff. Saturday was the Lions’ fifth consecutive district title. The last time the Lions did not win districts was 2015.