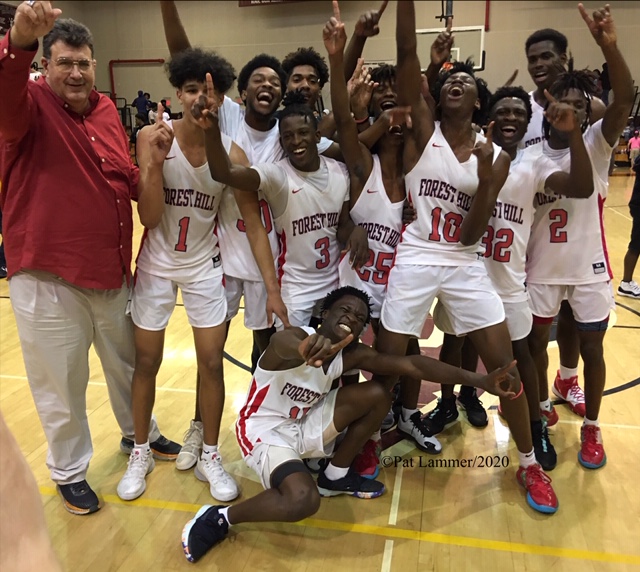 WELLINGTON — Forest Hill and Wellington were tied 45-45 with 49.9 seconds remaining in the third quarter of Friday night’s District 10-7A championship game.

Here are 5 players who stood out Friday night:

The 6-foot-6 junior was spectacular from the start — scoring, passing, rebounding, defending. Draper nearly had a double-double by halftime (15 points, 9 rebounds). He would finish with 22 & 10, shooting 9 of 17 from the floor.

Draper, the son of coach Tony Watson, played travel ball last year with Nightrydas Elite. “They gave out … they had no more steam. We ran them to death,” Draper said of the final 9 minutes of the game. He gave credit to Matt Colin & Co.: “Excellent program. They made it to districts all these years. Going to states all these years. It was a good thing to beat them.” IUPUI, FGCU and Stetson are among schools showing interest in Draper.

The freshman guard plays well beyond his years for Wellington (21-6). Allen has nice size and creates problems when he drives. He also posted a double-double, going for 13 points and 12 rebounds. USF has offered Allen while programs such as Dayton, FAU and UCF have been in and are evaluating him. “Right now I see a lot of mental toughness and he is maturing a lot,” his dad, Marvin Allen, said Friday. Marvel had been playing with Team Breakdown on the travel circuit but will be playing on the Nike EYBL circuit this spring and summer, per Marvin Allen.

Quick, quick, quick. The 5-11 senior guard plays a major role in the Falcons’ full-court press. He also does it at the other end. Daniels popped in 16 points — including four 3-pointers — vs. Wellington. Daniels is still searching for that first offer. Barry, FAU, UNF and JuCos are looking at him. “The last two years were really tough losing those two games [to Blanche Ely],” Daniels said. “So this year we expect to come back and do what we do best.”

The 6-6 junior has a nice stroke and can pile up the points in a hurry. Walker is a Division I prospect who spreads the floor. He shot 6 for 7 from the field for 13 points in the first half and finished with 23, including three 3s. Showed good hands catching the ball in the paint.

The 6-6 senior does a lot of things well. Mogbo put up 11 points and 9 rebounds vs. Wellington. He is long and does a nice job rebounding and defensively on the press. Senior Troy Joseph also had 12 points for Forest Hill. Coach Watson said D-I’s FAU, Jacksonville and Northeastern have been in to see the pair.