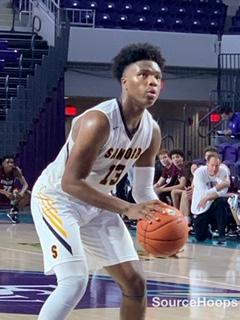 It’s Day Three at the City of Palms Classic and we get things kicked off early with a consolation round game between Sarasota Riverview and Sanford School of Delaware.  Both teams had the misfortune of playing the top seeds, IMG Academy and Montverde Academy respectively.

Riverview scored first with a three from David Mazon.  Sanford responded with a bucket inside from Carter Ruby.  Riverview hit another three but then Sanford went on a 16-2 run to lead 18-8 with just over three minutes to play in the quarter.  Riverview finally stopped the bleeding with a three point play, which began a 12-5 spurt to draw the Rams back to within three at 23-20.  A buzzer-beating three from Sanford’s Hassan Perkins made the score 26-20 after one quarter.

Riverview kept nipping at the Warriors’ heels in the second period.  Sanford’s lead never got more than five points, but Riverview could not pull into a tie, let alone take the lead.  Seemingly every time Riverview got within one possession, Sanford had an answer.  With twenty-two seconds left in the half, Riverview pulled to within one, 44-43 on a bucket from Mazon.  Once again, Sanford school beat the buzzer with a mid-range jumper from Jyare Davis to make the half-time score 46-43 in favor of the Sanford School Warriors.

Sanford scored first to open the third with a bucket by Perkins.  Riverview responded in a big way, going on a 9-0 run to take a 52-48 lead.  Now it was Sanford’s turn to battle up hill.  The Warriors got back to within one at 54-53, but a bucket inside from Mazon and a three from Jason Jackson pushed the margin to six, 59-53 with just over two minutes left in the period.  A three point play by Davis ended the third with Riverview holding a tenuous 62-60 lead.

The Rams hit a free throw to make it a five point game but the Warriors put together a quick 6-0 run to re-capture the lead.  With 4:35 left in the period, Riverview hit a three to tie the game at sixty-eight with 4:35 remaining.  The Warriors of Sanford would re-take the lead briefly, but a steal and score by Jackson with 1:25 left in the game gave Riverview a 77-73 lead with 1:25 left.  Sanford hit one of two free throws to draw within three then forced a Rams turnover.  Perkins of Sanford hit a three with fourteen seconds left to tie the game.  A desperation three from Riverview fell short and we headed to overtime!

Sanford scored the first four points in the OT and never lost the lead.  Twice Riverview got to within a point, but Sanford was able to hold them off at the foul line to win 87-84.

For Sanford, Davis led the way with 29 points while Hassan Perkins added 24 and Corey Perkins tossed in 21 points.

Riverview was led by Mazon with 22 points while Jackson hit for 21 points and Jon Blanding tallied 12 points.