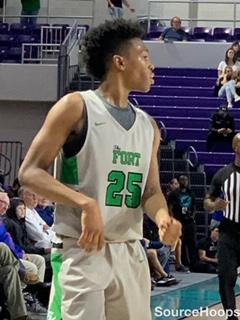 Ely is coming off another state title, but lost a ton of talent to graduation and transfer.  Fort Myers is trying to get to where Ely has been.

Ely grabbed a quick 5-0 led after a Dudley Blackwell transition bucket and a three from Kolby King.  Fort Myers finally got into it with a put back from Jamin Primus and tied it a five on a three from Landon Howard.  After an exchange of buckets, Fort Myers ripped off a 12-3 run, opening up a 19-10 lead with one minute left in the period.  Ely finished the first with a pair of free throws from King, but found themselves down 19-12 after one.

Both teams were flat to start the second quarter as with six minutes left, it was 23-17 in favor of Fort Myers.  The Green Wave stretched that lead to twelve, 29-17, with a 6-0 run, four coming from Javian McCollum.  Ely didn’t quit, however, finishing off the period with a 10-0 run, five of those coming from Jahleel Patterson to make it just a two point game at the half, 29-27, in favor of Fort Myers.

That margin stretched to six after the Green Wave scored the first four points of the third quarter.  Ely finally answered with a bucket inside from Patterson, but a 5-0 Green Wave run pushed their lead to nine at 38-29.  Patterson again got Ely back into it, scoring twice and cutting the margin to five at 38-33, but Fort Myers closed out the third quarter scoring six straight to make the score 44-33 heading into the fourth.

The final period was anti-climactic as Fort Myers extended its lead while Ely had a case of turnover-itis.  The Green Wave would go on to win big, 60-44.

Blackwell led Ely with 15 points while Patterson finished with 11 points.