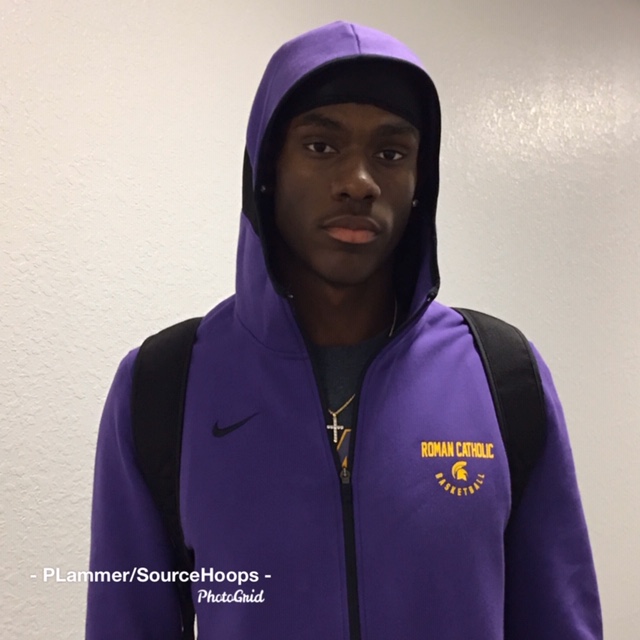 The Philly Roman Catholic 6-foot-10 sophomore put up 19 points, 18 rebounds and 5 blocks in just 25 minutes and 49 seconds Thursday during a 79-26 rout of Marshall County (Ky.). For his efforts, Duren (pictured) is the Source Hoops Day 2 MVP.

The five-star prospect made 8 of 9 field-goal attempts at the offensive end and was the anchor of a defense that held Zion Harmon & Co. to 8-for-43 shooting from the field. The high-scoring Harmon was held to just 2 for 14 from the field and 9 total points.

“Pretty much, you know, every conference is interested in Jalen and [6-4 sophomore guard] Justice [Williams],” Roman Catholic fourth-year coach Matt Griffin said. “And I think it will continue to be that way going forward. The ACC, the Big East, the Big Ten, Big 12 … everybody and anybody. They’re terrific young men and obviously they’re fantastic basketball players. But I’m most proud of the men they are. When most colleges call me I think first and foremost they obviously see their basketball ability but who they are as people that is what we stress in our program is the character of the person is what is going to take you where you want to go in your life. Talent only gets you so far.”

Thursday’s other top performances include:

The talented 6-6 sophomore went 8 for 9 from the field, hitting 4 of 5 3-pointers, en route to 20 points in just 14 minutes, 48 seconds vs. Fort Myers. Dailey was one of five players in double figures for a loaded IMG squad. Some of Dailey’s top scholarship offers include Florida, Iowa State, Michigan and Texas A&M. Tennessee said tonight they want to offer him. Dailey also has international offers and could go overseas.

The 6-8 Barnes transferred to Montverde from Davie University School and is one of the main cogs for coach Kevin Boyle. The Florida State recruit does everything for Montverde: Scores, rebounds, provides leadership, brings energy, defends. He spent a lot of time against Sanford School guarding its post, Nnanna Njoku. Thursday night, he posted a double-double (10 points, 10 rebounds) and played the second-most minutes for Boyle. Houstan (also 6-8), meanwhile, is just a sophomore. He drilled four 3-pointers on the way to a 18-point, 6-rebound performance

Banchero is a freak athlete at 6-9/6-10. The 5-star is imposing on defense and a tough, tough draw on offense. Banchero hit 6 of 11 from the field and 13 of 16 free throws against Blanche Ely to finish with 25 points, 7 rebounds and 3 steals. Kentucky, Duke, North Carolina, Gonzaga and others are in the mix.

The 6-4 Duke guard signee popped in 21 points in just 19 minutes as the Dolphins made quick work of Sarasota Riverview. Steward canned 8 of 13 from the field — including four 3s — and added 4 assists. He went down hard taking the ball to the rim on a block by Marquel Bryant but was able to walk it off and return. Duke’s Coach K. is scheduled to be at the City of Palms on Friday evening.

The talented Vashon duo combined to hit 15 of 31 from the field en route to a pair of double-doubles. The 6-8 Fletcher, coming off a quiet opener Wednesday in the loss to Scotlandville Magnet (La.), looked like a new person. The Kentucky recruit showed a quick first step on the offensive end and was a factor at the rim on defense. Fletcher went 9 for 18 from the field for 21 points and 10 rebounds. The 6-6/6-7 Clark again impressed, doing a lot of things well: 15 points, 13 rebounds, 3 assists, 2 steals. Clark can get you a bucket, is a solid passer and plays defense. He is being recruited by instate mid-majors.

The junior guard shined for the second consecutive day but ended up with an L. Chandler put up 28 points vs. Vashon to go with 6 rebounds, 4 assists and 3 steals. He made 8 of 16 from the field and got to the free-throw line 14 times (10 makes). Duke, Kentucky, Michigan, FSU and Tennessee are among the teams in on Chandler. Michigan head coach Juwan Howard was sitting courtside for both of his games in Fort Myers.

The Iowa State commit did what he could to keep Ely in it vs. Seattle O’Dea. Blackwell, who won state championships his freshman and sophomore seasons while at Fort Lauderdale Westminster Academy, scored 10 consecutive points in the fourth period to bring the Tigers back from 24 points down. In all, Blackwell had 16 points in the second half. But Ely could not totally get over the hump. Blackwell finished with 21 points, 8 rebounds and 3 assists. It was his first game with Ely after transferring from Huntington Prep in West Virginia.

The 6-9 junior started well and ended well while going for 16 points vs. Montverde. He made 8 of 11 shots from the field but was overmanned by the Eagles’ depth and size. Sanford School committed 20 turnovers to Montverde’s 5.