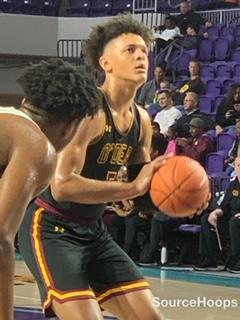 Gonzaga College plays in the powerful Washington (DC) Catholic Athletic Conference while O’Dea has become a prominent power in the Great Northwest.  O’Dea has an advantage of playing last night while this would be Gonzaga’s opening game in the City of Palms Classic.

O’Dea drew first blood on a three from Paulo Banchero to open the quarter.  Myles Stute countered with a bucket inside for Gonzaga.  O’Dea scored the next five points to build an 8-2 lead with 4:26 left in the quarter.  Gonzaga didn’t falter, tying the game on a three point play from Stute and a three from Terrance Williams.  O’Dea came right back with a 6-0 run.  Gonzaga would replay with a 6-2 run to make the score 16-14 after one period of play.

Stute tied the game at sixteen with a transition basket for Gonzaga but Jon Christofilis gave O’Dea the lead with a driving score.  Gonzaga then took control as a pair of threes from Stute sandwiched around a bucket inside from Malcom Dread gave Gonzaga a 24-18 advantage with 3:14 to play. O’Dea got to within two after a bucket inside from Banchero and another from Max Debiec, but Judah Mintz of Gonzaga made it a two possession game with a driving lay-up.  Both teams would each score one more basket to end the half and Gonzaga owned the lead, 28-24.

The third quarter found O’Dea keeping pace with Gonzaga but unable to tie or take a lead.  A three from Paul Johnson tied the score at thirty-six with just under five minutes remaining in the period.  Gonzaga responded with a bucket inside from Devin Denkins and a slam inside from Stute to grab a four point advantage.  Twice O’Dea got to within two, the last on a drive and score by Banchero to make it 42-40 with 2:25 to go.  Gonzaga then scored six straight, to take a 48-40 lead with 1:24 to play in the quarter.  Christofilis hit a three for O’Dea to cut the deficit to five.  The teams traded baskets and with one quarter left to play, it was still anybody’s game with Gonzaga up five 50-45.

A three point play by Williams pushed Gonzaga’s lead to eight to open the fourth quarter.  That eight point lead held at 59-51 with just over five minutes to play, then O’Dea made a run.  Christofilis hit a three and Dezjay Perkins hit a floater in the lane to get to within five at 61-56 with 3:12 to play.  Disaster then struck as the O’Dea bench got hit with a “T” arguing a foul call.  Gonzaga hit three of four throws to push the lead up to eight.  O’Dea would get as close as five at 69-64, but with only forty seconds left, there was just not enough time left to make it all the way back.  Gonzaga would go on to win by the score of 74-66.

Gonzaga was led by Stute with 22 points while Chuck Harris had 18 points and Terrance Williams added 10 points.

For O’Dea, Banchero led all scorers with 28 points while Christofilis finished with 14 points.