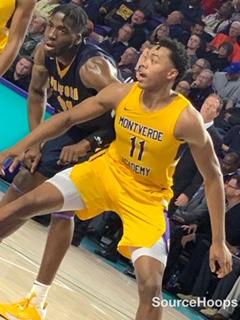 The Eagles of Montverde Academy are the number one team in the country according to “experts”, but Whitney Young out of the Chicago Public League is a proud program and backs down to no one.  If the Dolphins can hold up inside, they definitely have a chance to knock off Montverde.

Boom!!  Montverde scored the first eleven points of the quarter, highlighted by back-to-back threes from Dariq Whitehead.  D.J. Steward of Young finally got the Dolphins on the board with a deep three.  Day’Ron Sharpe scored inside for Montverde but Jaeshon Thomas hit another three for Young to make the score 13-6 with 4:14 left in the quarter in favor of the Eagles.  A 6-2 run for Montverde pushed their advantage to eight but a late floater from Thomas of Young made the score 19-10 after the first period.

Montverde continued to attack and scored the first five points of the second period to lead 24-10.  Tyler Beard finally got Young on the board in the second quarter with a mid-range jumper.  Whitehead of Montverde answered that with a personal five point run to push the score to 29-12 with just over four minutes to play in the half.  Steward hit a floater for Young but a three from Caleb Houston and a free throw from Whitehead gave Montverde its largest lead, 33-14, with just under three minutes to play.  Young would close the quarter strong, finishing with an 8-2 run to close to within 35-22 at the break.

Whitney Young got the margin down to eight, 35-27, early in the third after Beard hit a three and then scored on a drive.  Cade Cunningham hit a three for Montverde to put them on the board in the third quarter.  Grant Newell scored inside to keep Young within shouting distance.  It was still a nine point game, 40-31, when Montverde ripped off six straight points on a pair of buckets from Sharpe and a score by Cunningham to push Montverde’s advantage to fifteen, 46-31, with just over three minutes to play.  From there the teams would trade baskets and with one period left to play, Montverde was up 52-37.

Each team hit a three to start the final period, but the Eagles got scores from Scottie Barnes and Langston Love as well to go up by nineteen, 59-40 early in the fourth.  From there, Montverde would rip off an 11-2 run to go up 70-45 to end any chance of Young mounting an amazing comeback.  At that point the final score was all that need to be posted.  Montverde advanced to the semis with an 82-56 win.

The Eagles put four players in double figures as Barnes and Sharpe each had 16 points, Cunningham tossed in 14 and Whitehead finished with 12 points.