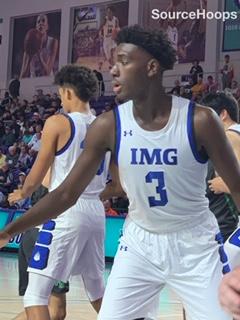 Stepanic boasts a pair of high D-I recruits in R.J. Davis (North Carolina) and junior Adrian Griffin (Duke).  IMG has that multiplied with a slew of tall and talented players.  Thank goodness these games are played on the court, not on paper.

Tennessee recruit Jaden Springer scored the game’s first two points on a pair of free throws.  Griffin responded with a putback for Stepinac.  At that point, IMG ripped off eight straight points, four of those from Matthew Murrell, to lead 10-2 with 5:20 to play in the period.  Davis hit a three for Stepinac and then after an IMG bucket, Luke Fizulich of Stepanic completed a four point play to get Stepanic to within three.  IMG scored again but Stepanic was feeling it. A bit later, a three from Davis got them to within two, 14-12, with 3:15 to play.  From that point, IMG would outscore Stepanic 8-2 to lead 22-12 after one period.

IMG got their lead into double-digits with a 6-2 run at the start of the second, leading 28-16.  Stepanic answered with four straight and got back to within eight.  A bit later, with the score 32-22 in favor of IMG, Davis knocked down a three for Stepanic to make the score 32-25 with 3:39 left in the half.  IMG would then extend its lead to eleven and led by that much after a Mark Williams dunk with just twenty-five seconds left in the half.  A free throw by Davis of Stepanic made the score at the half 43-32 in favor of IMG.

A dunk inside by Williams and a transition basket for Murrell upped IMG’s lead to fourteen at 47-32 just over a minute into the third.  The teams would trade baskets for a while and with 4:38 to play in the period, IMG had their largest lead at fifteen, 52-37.  At that point, Stepanic started a long climb to get back into the game.  Stepanic scored five consecutive points to get the margin down.  Jarace Walker of IMG made It a twelve point game, 59-47, with just under two minutes to play but Griffin hit a three for Stepanic with thirty seconds left in the third to make it a nine point game, 59-50, going into the final period of play.

That nine point lead stood pat into the fourth quarter, 63-54, with just over seven minutes to play.  Stepanic then scored six consecutive points as Davis hit a three and Fizulich hit a three point play.  All of a sudden, the score is 63-60 in favor of IMG with 5:27 to play and it is a whole new ball game.  IMG responded with a bucket from Springer and a three from Walker to go up eight but Griffin scored twice for Stepanic to get back to within four, 68-64, with 3:12 to play.  At that point, IMG slammed the door, outscoring Stepanic 12-3 to close out the contest and win comfortably, 80-67,

Springer led IMG and all scorers with 30 points in the contest, followed by Walker with 13 points and Murrell with 12 points.

Both Davis and Griffin finished with 20 points for Stepanic and Fizulich added 15 points.