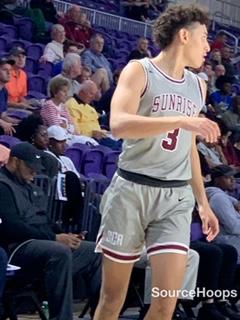 The second game of the Signature Series featured two more nationally-ranked programs in St. Frances of Baltimore and Sunrise Christian Academy from Kansas.  Both teams are laden with D-I talent, and it would be interesting to see how these two teams would perform at the City of Palms.

After a thunder dunk by Sunrise’s Kendall Brown, St. Frances hit a pair of threes, one by Kyrie Staten and another from Byron Ireland, to take a 6-2 lead after one minute of play.  From there, Sunrise took control, scoring the next eleven points to lead 13-6 with just over two minutes to play in the quarter.  St. Frances finally got the lid off their basket but Sunrise was still on a roll and finished the quarter up 20-10.

St. Frances hit a free throw to start the second quarter, but still didn’t have an answer for Sunrise at the offensive end.  A three from Davonte Jennings and a three point play from Shaedon Sharpe pushed the score to 26-11 in Sunrise’s favor.  A steal and score by St. Frances’ Staten was their first field goal of the quarter for the team.  Sunrise then hit four threes in a row while St. Frances could only muster a pair of two point basket to make the margin 38-17 with just under two minutes to play.  The teams would trade baskets and a lonely free throw from St. Frances would make the margin twenty, 40-20, at the end of the second quarter.

Early in the third quarter, St. Frances got the margin below twenty at 42-23.  Sunrise responded in a big way, putting together an 8-1 run to extend their lead to 50-24.  St. Frances simply could not muster enough offense on a consistent basis to put a dent in the deficit.  However, at this point they would keep pace with Sunrise.  With one quarter left to play, Sunrise has a 56-30 lead.

In that final period, Sunrise pulled back the reigns and St. Frances played with a greater sense of urgency.  With 2:47 left in the contest, St. Frances finally got the margin below twenty and ultimately got to within fifteen at 65-50.  However, with only 1:30 left to play, it was too little too late.  Sunrise would go on to win comfortable by the score of 73-55.