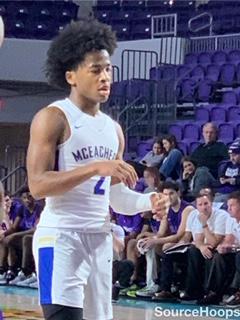 The first quarter-final game of the day features two Southern powers.  Both Scotlandville and McEachern were state champs last season and returned enough talent to be given national rankings entering this season.

Sharife Cooper of McEachern scored five quick points to open the period to get the margin below double-digits.  Carvel Teasett hit a three for Scotlandville to make the score 24-12 with 4:44 left in the half.  From there, the teams went dry as McEachern scored just six points and Scotlandville just two to finish out the second quarter.  At that point, Scotlandville led 26-18.

Scotlandville scored the first bucket of the third period to lead by ten.  That’s when the wheels fell off, or rather Sharife Cooper took their wheels.  Cooper hit two free throws to cut the margin under double digits.  After assisting on a bucket, Cooper scored McEachern’s final eight points of third, outscoring Scotlandville 8-2, to tie the game at thirty all heading into the final quarter.

A Joseph bucket as well as a Beekman put back for Scotlandville gave them an early four point fourth quarter lead, but Cooper wasn’t done. He scored seven straight points against only two for Scotlandville to give McEachern a 37-36 lead.  From there, the teams would exchange the lead on six different occasions over the next three minutes.  Scotlandville hit a three to lead 44-43 with 1:22 to play but Cooper hit two free throws for McEachern to give them the lead.  Scotlandville missed on a drive to the rim and was now forced to foul.  Moore hit two free throws for McEachern but Scotlandville scored to get back to within one at eight seconds.  Moore was fouled again and made just one of two, giving Scotlandville life with five seconds left.  However, their last chance three fell shot and McEachern advanced to the semi-finals with a 48-46 win.

Cooper finished with 27 points for McEachern while both Moore and Randy Brady had nine points each.