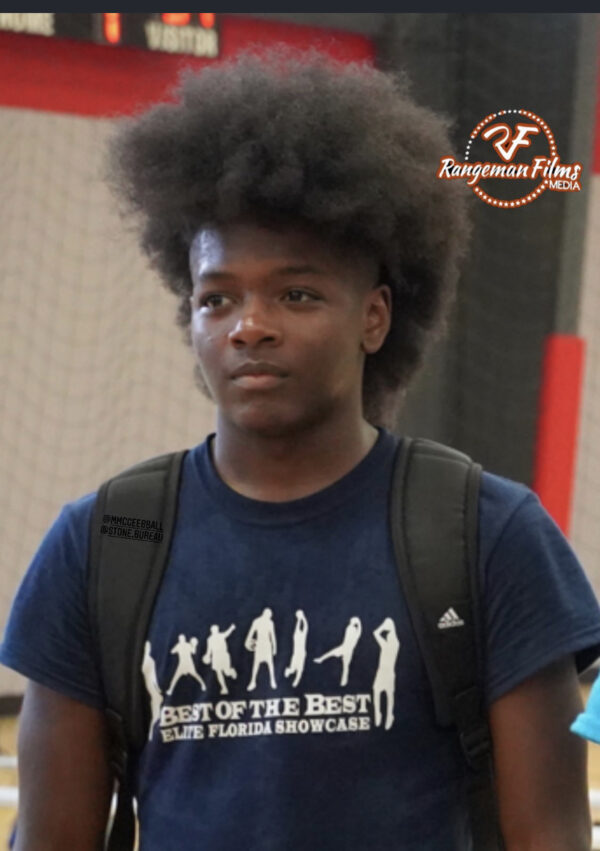 We continue our coverage of the Best of the Best Fall Elite Showcase with a look at some of the better Sophomore and Freshmen players in attendance.

Stone Bureau, Riviera Beach Suncoast (pictured): The 6’0 freshman was very solid in all phases of the game on Sunday and shows great promise.  He has great control of the basketball, reads the floor well, and makes good decisions on the move.  Bureau did a good job of driving the ball to the basket in either direction and scoring in traffic.  He made several perimeter jump shots in the game we took in.

Kellan Lewis, Orlando Lake Highland Prep: A 5’11 freshman, Lewis proved to be a quick and shifty guard.  A solid ball-handler and distributor, Lewis proved adept at finding space in traffic to get up shots.  He also pushes the pace and is quick to turn from defense to offense, whether on a miss or turnover.  We didn’t get to see much in the way of a perimeter jump shot from Lewis, so that is something to watch for next time we see him.

Adrian Moore, Largo: The 6’0 freshman from Florida’s Bay area had a good outing at the event.  He opened the day by hitting a three off the dribble in transition then followed that up with a mid-range jumper off the dribble.  Moore threw some good passes while on the move, showing that he keeps his head up and is looking to make a play whenever possible.  For his size, Moore was active on the glass and didn’t shy away from the physical play in the lane.

Henry Hurst, Tarpon Springs East Lake: The 6’0 sophomore is built like a football player but is definitely a hardwood baller.  Hurst uses his frame to overpower smaller defenders on his way to the rim and score in a crowd once there.  Quite often he earned “and one” trips to the free throw line.  His physical traits also allow him to compete successfully on the offensive glass.  To top it off, Hurst made good decisions with the basketball when running the break.

Julian Granville, Fort Lauderdale U-School: A 6’3 freshman, Granville is very adept at using ball fakes, head fakes, and other sorts of deceptions to create space for a shot on the perimeter or get to the basket.  He can score with a floater in the lane or with either hand around the rim.  Granville shoots the ball well out to the three point line and he does a good job of mixing his drives with perimeter shots to keep the defense off balance.  He has a bit of flare to his game and is entertaining to watch.

Isaiah Brown, Orlando Christian Prep: The 6’2 freshman continues to display solid fundamentals and knowledge of the game.  At this stage he won’t “wow” people with athleticism but he’s a reliable perimeter shooter and makes good pass vs. shot decisions with the basketball when driving to the rim.  Defensively he’s alert for lazy passes thrown into his area, anticipates well, and is quick to push the ball up the floor when grabbing a defensive rebound.

Aaron Delince, Fort Pierce Central: A 5’10 sophomore, Delince has a strong upper body and uses his strength and speed to get to the basket regardless of the game’s tempo.  He missed a couple of easy ones but made a couple of tough shots as well.  He was one of two from beyond the arc but we’d still like to get a better look at his jumper the next couple of times we get the chance to see him.  Delince reacts well on the defensive end and quickly turns steals into scores.