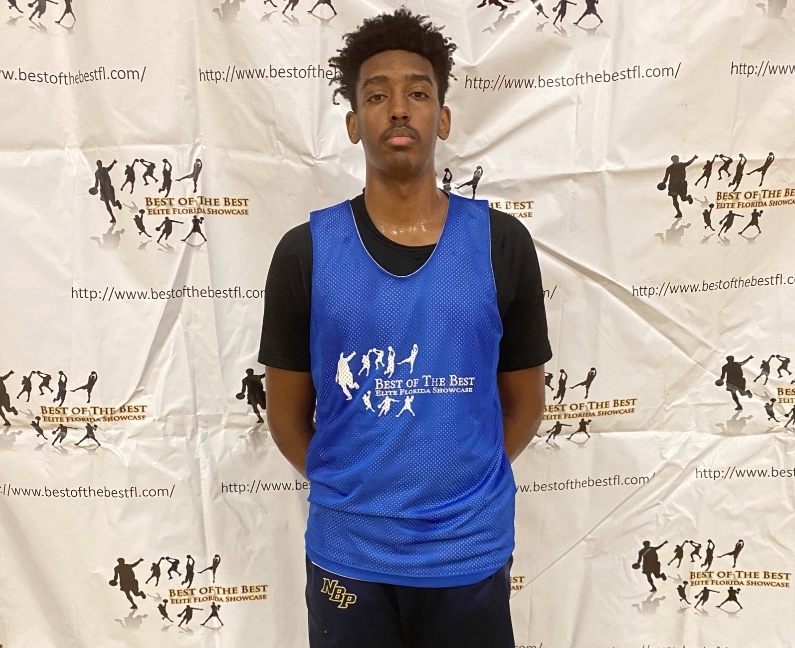 The Best of the Best Fall Elite Florida Showcase took place in Apopka this past weekend.  Split into two levels (SR/JR & SO/FR), the event provided an opportunity to see some of the better players in the state in one locale.  This first report will focus on members of the 2021 and 2022 Classes.

Justin Abson, North Broward Prep (pictured): The 6’9 junior has good size with a strong frame and improving athleticism.  Abson has solid low-post moves, scores with either hand around the basket, and can step out and make perimeter shots if left open.  What makes him a rarity is his passing skills out of either post area.  Abson has good vision, quickly identifies cutters, and gets his teammate the ball where it can best be used.  A physical defender, he does a good job of protecting the rim and challenging shots in the lane.

Demetrius Robinson, Melbourne Holy Trinity Episcopal: The 6’6 senior shot the ball well off the catch and the dribble from inside the arc, making several contested perimeter jumpers.  A good athlete, Robinson got to the basket quickly with one or two dribbles when overplayed for the jumper.  An active rebounder, especially at the offensive end, he has a quick leap and long reach.

Christian Combs, Kissimmee Osceola: The 6’0 junior was deadly from deep all day.  His shot is smooth with a quick release.  A solid ball-handler, Combs has good change of speed and change of direction dribble moves to get him to where he wants to go.  When he does head to the basket, he showed that he could score with either hand.  Defensively, he is solid with active hands and feet.

Fernando Monroe, St. Petersburg Hollins (f/k/a Dixie Hollins): The 6’1 senior proved difficult to keep out of the lane.  He is both very fast with the ball in the full-court and quick with it to the basket when the tempo slows down.  Monroe connected on floaters in the lane over defenders as well as scoring through contact in traffic near the basket.  His ability to shoot the ball from the perimeter kept the defense off balance the entire contest.  With long arms and excellent foot speed, Monroe was one of the more effective on-ball defenders at the event.

Nathan Rembert, Wildwood:  A 5’8 senior, Rembert proved that the adage “good things come in small packages” is still very true.  He excels at breaking down the defense with the dribble, getting into the lane and scoring or setting up teammates for easy shot attempts.  A creative scorer and solid decision maker on the move, Rembert kept the defense off balance by hitting perimeter shots out to the three-point line. He also did a solid job of pressuring the basketball on the defensive end of the floor.

Joey Brown, Miami Florida Christian: The 6’3 senior is a strong-bodied lefty.  He shot the ball well from the perimeter off the dribble out to the arc in the game we took in.  Brown’s strength also allows him to overpower defenders, get to the basket, and finish through contact.  He brings that same prowess to the defensive end, using his body to bump cutters and keep the opponent from going where he wants to go.

Lewis Jones, Orlando Oak Ridge: A 6’6 junior, Jones is an athletic slasher that consistently gets to the basket.  He does a good job of making decisions on the move, either scoring or getting the ball to teammates for easy shots.  An improving perimeter shooter, Jones has definite potential as a point forward.  A very good athlete, he rebounds well at both ends and can defend different positions.