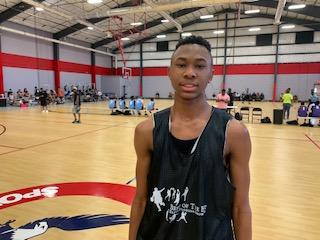 We finalize our coverage from the weekend’s Best of the Best Elite Florida Showcase with a look at some incoming freshmen.  The Class of 2023 looks to be strong out of the gate and these players will become familiar sooner rather than later.

Gavin Aydelotte, Fort Pierce John Carroll: At 6’8 with a relatively sturdy frame, Aydelotte definitely grabs attention.  For a player his size and age, he moves pretty well up and down the court.  Armed with some basic post moves and decent touch, he scores well around the basket.  Aydelotte’s game will grow along with his becoming more comfortable in his body.

Sean Stewart, Orlando Lake Highland Prep: Already 6’6 with a solid frame and decent basketball skills, Stewart has a chance to be special.  He’s fearless taking the ball strong to the basket and his perimeter jumper is respectable.  Stewart is a good athlete and uses his physical gifts well in both the rebounding and defense departments.

Jayden Hastings, Orlando Christian Prep: The 6’8 post player already looks improved from when we saw him three weeks ago at the USF Elite Camp!  He has a good frame, moves up and down the floor well, and eagerly challenges shots and grabs rebounds at the defensive end.  Hastings is more power than finesse inside but he did show some surprisingly good ball-handling skills on the perimeter as well as in the open court.

Gregory Spate, Oakland Park Northeast: The 6’5 wing has a world of potential thanks to his size, length, and athleticism.  He’s a solid ball-handler that likes to grab rebounds off the defensive glass and push the ball up the floor in transition.  Spate is a high-flyer in transition and easily finishes above the rim.  His perimeter shot is still a work-in-progress but he has time to improve.

John Gamble, Punta Gorda Charlotte: The 6’4 guard’s talents, both physical and skill-wise, are well beyond most high-schoolers, let alone freshmen.  Gamble is long, lean, bouncy, and is quick to get to the basket and finish above the rim.  Just when you are tempted to label him as “only a slasher”, Gamble will knock down a three or fire a deft pass to an open teammate for an easy score.  Bottom Line: Gamble can be as good as he wants to be.

Sean Combs, Kissimmee Osceola: A 6’1 point guard, it won’t be surprising if the state champ Kowboys turn over the keys to the offense to Combs the first day of practice.  Blessed with great court vision and a high basketball IQ, he gets teammates involved early but knows how to score when a bucket is needed.  Combs’ perimeter shot appears solid and he does a good job of keeping his head up while on the dribble looking to make the right play.

K.J. Robinson, Orlando Christian Prep: The 6’0 guard is quick and speedy with the basketball.  It was hard for the defense to keep Robinson from going anywhere he wanted with the ball on Saturday.  He’s a crafty passer that looks to facilitate more than score at this time.  It will be interesting to watch how his slight frame as well as his game fills out over the next four years.

Sam Walters, The Villages: The 6’8 forward wasn’t on the roster and didn’t show up until mid-way through the event, but once he hit the floor Walters made an impact.  The lefty showed a knack for driving to the basket and scoring in traffic.  Walters has a respectable perimeter shot, a good basketball IQ, and has the skills to play both inside and out.