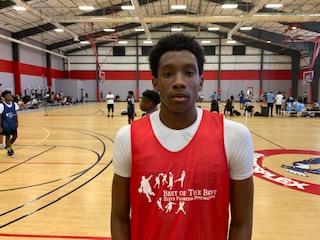 We turn our attention to the 2022 Class in this report from the weekend’s Best of the Best Elite Florida Showcase.  With just one year of high school under their belts, the class looks promising as some new names and enhanced games stood out.

A.J. Brown, Orlando Christian Prep: The 6’4 guard is all kinds of long and active.  The genius that is our own Al Arnold said it best on twitter during the event: “Brown is a big-time scorer who can get into the paint and finish over larger and longer defenders as well as owning a strong pull-up game off the bounce.” Brown also proved to be an active defender both on and off the ball.

Eric Navarro, Kissimmee Central Point Academy: One of the event coaches asked us to watch this kid midway thru the contest and we are glad we got the info.  The 6’3 guard is a recent arrival from Puerto Rico and seems to be adapting well to the American-style game.  Navarro has a solid frame and takes the ball strong to the basket whenever possible without fear of contact.  He has a nice touch with either hand once there.  Navarro also rebounds well for his size and is quick to grab a defensive rebound and push it up the floor to put pressure on the defense.

Brice Sensabaugh, Orlando Lake Highland Prep: The 6’4 guard is a crafty and creative scorer out on the perimeter.  He’s an accurate three point shooter but also strong enough to overpower defenders on the way to the basket.  Sensabaugh is a good athlete at this stage of his physical development, but should improve his speed, quickness, and explosiveness as he matures.

Taylor Hendricks, Fort Lauderdale University School: The 6’8 sophomore will get a chance to step out of the shadows this season at U-School.  He is effective in the post with good footwork and soft touch with either hand.  Hendricks can also pull his defender away from the basket area and score, either via perimeter shots or putting the ball on the floor for a dribble or two and scoring at the rim.  While not a jaw-dropping leaper, Hendricks does dominate his rebounding area and challenges shots in the paint.

Christian Combs, Kissimmee Osceola: The 5’11 point guard was one of the finds of the day.  He consistently knocked down threes but also pushed the pace and found teammates for open shots.  Combs also was active on the defensive hand with quick hands and feet.  He certainly looks up to the challenge of stepping in the graduated Josh Marte.

Andrew Akuchie, Fort Lauderdale St. Thomas Aquinas: The 6’6 forward could become as good as older brother Michael should he fill out and get stronger as expected.  Akuchie is fairly skilled and showed he can make open shots on the perimeter as well as score with some basic moves inside.  He moves up and down the floor well, is a solid athlete, and active in defending the paint.

Kolby King, Pompano Beach Ely: The 5’11 guard looks to have a promising future with the highly successful Tigers.  The lefty is very fast and quick with the ball, breezing by defenders in both transition and when attacking the defense in the half-court.  King had some success knocking down perimeter shots but still needs to gain consistency in that area.  To no one’s surprise, he is a solid defender, as you can’t play for Coach Randall unless you put in work on that end of the floor.