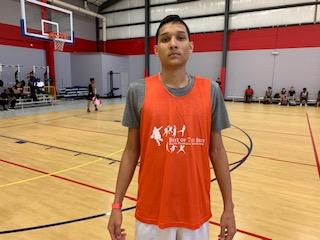 In this report from the weekend’s Best of the Best Elite Florida Showcase, we will focus on some of the better players in the Class of 2021 in attendance.  It was a deep and talented group.

Marcellus Thomas, Lakeland Kathleen: In an event that was filled with a lot of guys that get to the basket and finish, the 6’2 guard was one of the better ones.  Long strides get him into scoring position quickly and quick elevation off the floor allows him to score at the rim before the defense can rotate and help.  He’ll need to show that he can score with a jumper from the perimeter sooner rather than later.  His physical traits suggest he could be a top-shelf defender down the road.

Miles Stewart, Orlando Lake Highland Prep: The 6’6 forward has grown a couple of inches since the season.  His offensive skills are still developing but he is a productive scorer in transition, on put-backs, and opportunity baskets inside.  While a bit on the thin side, Stewart overcomes a lack of bulk with a long wing span and excellent timing when it comes to blocking shots or chasing rebounds.  His best basketball will most likely be on the collegiate level in a few years.

J.J. Harris, Orlando West Oaks Academy: The 6’4 guard continues to evolve as a player that can contribute at either backcourt spot.  As a point guard, he pushes the pace and looks to advance the ball down the court as quickly as possible.  Harris has also improved when it comes to making the right read when using ball screens.  Off the ball, he finishes well when driving to the basket, especially going to his right.  Harris also has improved his three point shooting.

A.J. Neal, Orlando West Oaks Academy: While the 6’1 guard didn’t shoot the ball as well as he normally does, we were encouraged by how he was able to impact the game in other ways.  He was able to get teammates involved offensively, especially in transition.  Neal was also active on the defensive end, being alert for lazy passes into his area and showing improved lateral quickness and effort.

Justin Hicks, West Nassau: The 6’2 guard is very athletic as he easily finishes above the rim and is fast with the ball in transition.  He is also quite quick and active defensively, either forcing bad passes or getting fingers or hands on the ball for tips or steals.  Hicks is best when he gets to the basket but his perimeter shot is streaky and must be respected.

Ramses Melendez, Kissimmee Central Point Christian Academy: The 6’5 guard continues to elevate his stock and is becoming one of the upper tier players in the 2021 Class.  He has good size and length for the backcourt, has a deep and consistent shooting stroke out on the perimeter, and has the mentality to attack and finish above the rim if given the opportunity.  It is for good reason that Melendez is starting to attract attention from high major programs.

Donovan Draper, West Palm Beach Forest Hill: At 6’5, Draper is another perimeter player that is comfortable at any perimeter position.  An unselfish player, he has a knack for finding open teammates and getting them the ball when it appears it can’t be done.  Because of his passing and ball-handling skills, Draper is more likely to attack the defense with the dribble than attempt perimeter jumpers.  This allows him to force the defense to react to him and Draper can then make the best read to get the best shot.  He is also an active defender that covers a lot of ground quickly and anticipates well on that end of the floor.