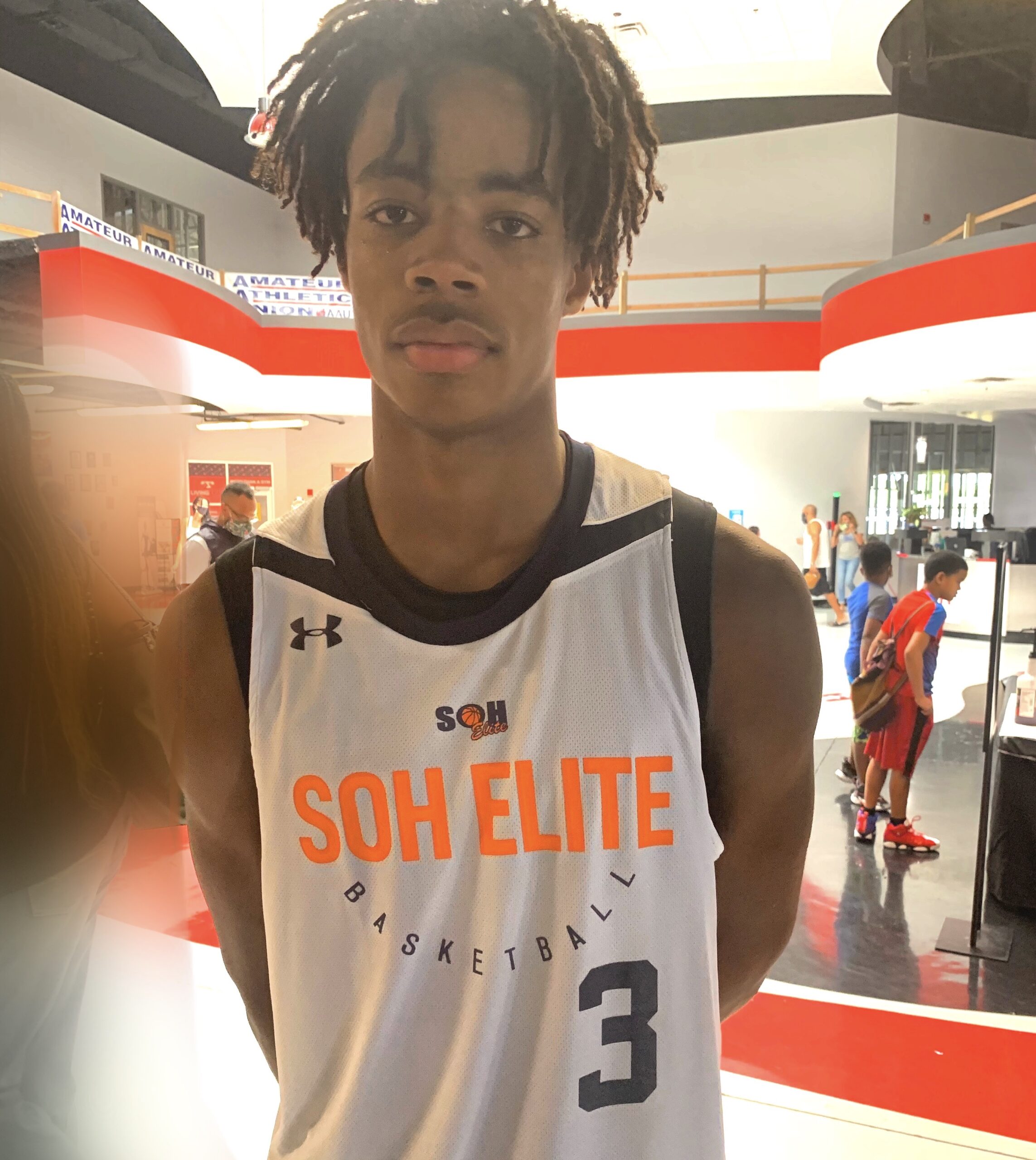 More from this past weekend’s Battle of the South.

Esteban Lluberes, Shahbaz Elite: A 5’9 junior out of Riviera Prep in Miami, Lluberes is one of the top guards in South Florida.  While not blessed with ideal size, he is quick and shifty with the basketball.  Lluberes excels at reading the floor and making good decisions. Adept at breaking down the defense, he gets into the lane with an idea of what he wants to accomplish and how to get it done.  A reliable shooter from the perimeter, Lluberes will surprise with his ability to score in tight spaces at the basket.

John Latimer III, Q6 All-Stars Elite: A 6’2 senior out of Apopka, Latimer has had some solid outings in the past, but this was our first chance to see him this off-season.  Strong and both physically and mentally tough, Latimer can get and make his own shot off the dribble on either side of the arc.  He pushes the pace and plays with a great deal of confidence.  Defensively, he moves his feet well, has active hands, and reads the passing lanes well.

Marquez Ray, Jacksonville Warriors: A 6’9 senior from Jacksonville Jackson, Rey was a key part in leading his team to a come-from-behind win on Saturday.  Facing a smaller, quicker and more aggressive team, Rey was re-inserted into the line-up and became the focus at both ends of the floor.  He blocked shots on the defensive end and scored inside on offense.  Rey has a solid frame and will become a better athlete on the college level once in a conditioning program.  He scores well on the block, has fifteen foot range on his jump shot and can drive the ball with one or two dribbles to score from inside the arc.

Oteman Delancey, SPSA Run: A 6’4 senior at St. Pete Lakewood, Delancey was bound and determined to get to the basket Saturday.  He can make open perimeter jumpers but he is best when attacking the basket and overpowering defenders in the lane.  Delancey earned a lot of trips to the foul line Saturday and made the most of his attempts.  He brings that same aggression to the defensive end of the floor.

Jimel Lane, Florida Rams: A 6’6 junior now at Archbishop Carroll in Miami, Lane is a lithe athlete that excels in transition.  In the half-court, Lane is best when getting to the basket with one or two dribbles but has improved a perimeter shooter since we saw him earlier in the summer.  He is also a willing passer on the break or when driving to the basket.  Lane has active hands and feet on the defensive end and is a rebounder that can grab the ball and push it up the floor on his own.

Justin Johnson, Shahbaz Elite: The 6’6 sophomore out of Doral Academy had a solid outing playing up a couple of levels.  Athletic and skilled, Johnson impressed with his ability to score from mid-range with pull-up jump shots over defenders.  He also proved to be a solid ball-handler and active on the glass, especially at the offensive end.  Johnson has the makings of a multi-position defender with his long wing span and ability to anticipate ball movement.

Jasai Miles, SOH Elite: Another sophomore playing up, the 6’5 Miles impressed as a perimeter shooter, knocking down multiple shots behind the arc.  He can and will take the ball to the basket to challenge the defense if overplayed for the perimeter shot.  A good athlete, Miles has the type of ability and athleticism to be one of the better players in what looks to be a loaded 2023 Class in South Florida.