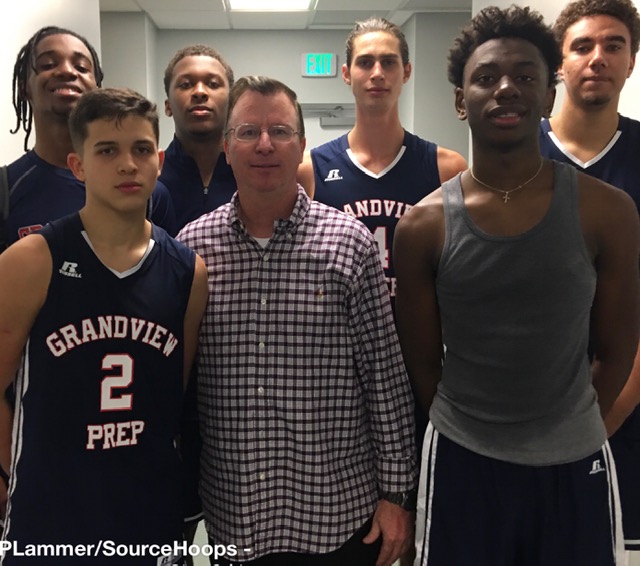 Head coach Joe Dawson and the Pride were impressive in knocking off perennial-power Wellington, 91-71, in the quarterfinals of the three-day tournament.

The young Pride jumped on Wellington early, building a 23-12 first-quarter lead. Grandview Prep was up 44-31 at the half and 71-50 going to the fourth period.

“Tonight we expected a slower, grind-it-out game in the 40s or 50s,” Dawson said. “But it was one of those games … we made shots. All of our guys made plays.”

The Pride are young, athletic and have size. Octave, Santiago, Brown and Makye Boles are all juniors and Nate Sasser is a freshman. Just Jalin Thomason is a senior.

Santiago is the point guard. He, Octave and Sasser are all excellent drivers. Brown and Boles played well on the block.

“When we are able to stop teams defensively and rebound, we’re able to get it out and go,” said Dawson. “We have really good guards that make great decisions and they are really quick. We were able to get a lot of easy baskets. That was a big key for us early to get on the lead and play on the lead.”

Dawson said college coaches are starting to come around. He said he did not want to mention names for the time being. The Pride are 10-1 with the lone loss coming vs. Miami Norland at the Kreul Classic.

Wellington is 9-3. Its losses are: Sagemont, Westminster Academy and Grandview.

Freshman guard Marvel Allen led the Wolverines with 19 points. Dayton is among the schools already interested in the ninth-grader. Senior De’ante Perez added 17.

The 6-foot-5 guard, with offers from Alabama, FAU, Iowa State and USF and interest from Memphis, scored 11 of his 20 points late in the fourth quarter.

Thompson hit a 3-pointer, drove and and was fouled for an old-fashioned three-point play, and hit another 3, before scoring the game-winning bucket with 23 seconds to play.

Sagemont — down just 1 — still had the ball for what could have been the last shot. But Ausar Thompson knocked the ball away from Sergey Grishaev and Pine Crest (6-3) ran out the clock.

NBP TOO STRONG FOR OLYMPIC HEIGHTS

NBP will play First Academy — 60-46 winners over Hialeah American — at 6:30 Friday in the Gold bracket semis.

First-year coach Alex Marshall said of Williams: “Jayden [No.] 11, he just got ranked top 10 for eighth grade. This is a kid that’s really learning some things right now. We’re trying to teach him the fundamentals of the game and to understand the game.”

SCORES FROM THE ROCK SILVER BRACKET