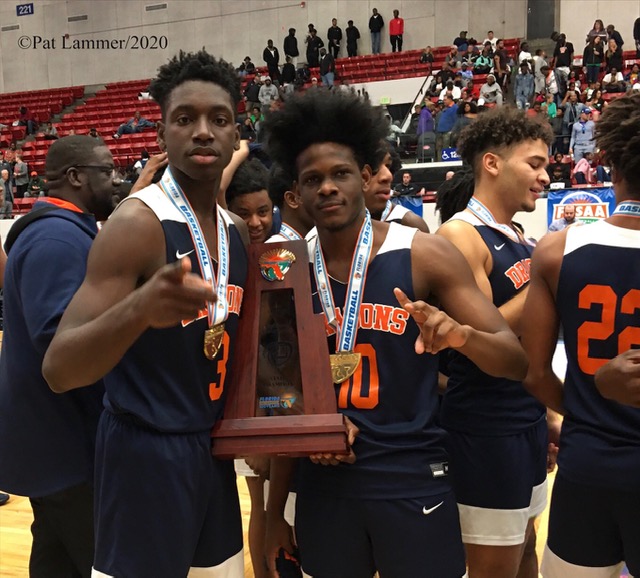 Source Hoops’ Pat Lammer was in Lakeland for the 2020 FHSAA Boys State Basketball Tournament. He will be unveiling All-Tournament teams — one per day — for all seven classes Class 1A-7A. Here is the fourth installment:

The 6-foot-3 junior (pictured, left) posted a double-double (14 points, 10 rebounds) in the semifinal win over Jacksonville Paxon and came back with 15 points and 9 rebounds in the state championship victory over Tampa Catholic. Squire’s 3-point shooting gave the Mighty Dragons a huge lift in Lakeland. He connected on 9 of 18 overall from the field and shot 60 percent (6 of 10) from 3-point land. Squire kept foes off the glass with 14 defensive rebounds.

The 6-9 big posted double-doubles in both final four games. Broome — a Morehead State signee — scored 22 points and grabbed 12 rebounds in a semifinal W over Lake Highland Prep. Broome had 20 & 10 in the state championship game loss to Stranahan. The Plant City native shot 15 for 24 from the field in Lakeland and was impressive at the rim with 7 blocks.

The 6-1 point guard, the son of former UCF and NFL quarterback Daunte Culpepper, led Stranahan in the state championship victory over Tampa Catholic with 19 points and played stellar defense with 4 steals. The unsigned Culpepper scored 13 points in the semifinal win over Paxon. Culpepper shot 8 for 18 from the floor in the tournament and got to the free-throw line often (24 attempts).

The athletic 6-6 star showed his versatility inside and out in scoring 29 points, with 9 rebounds and 3 blocks in a semifinal loss to Stranahan. You can see what UCF likes in the 2020 signee. Adams was good on 10 of 21 from the field, including five 3-pointers, and hit 4 of 6 free throws.

Berry, the younger brother of Joel Berry II, knocked in 18 points in the semifinal loss to Tampa Catholic. The 5-9 sophomore guard runs the team like a veteran. He connected on 7 of 18 field-goal attempts, including two from deep. Berry added 4 rebounds and 2 steals.