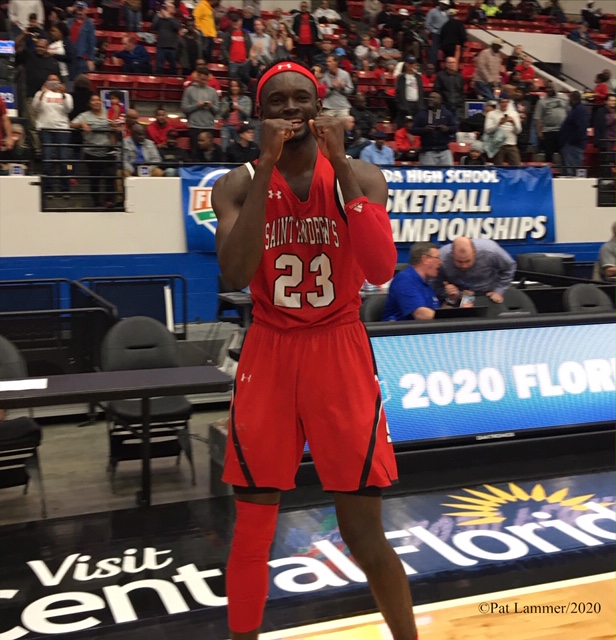 Source Hoops’ Pat Lammer was in Lakeland for the 2020 FHSAA Boys State Basketball Tournament. He will be unveiling All-Tournament teams — one per day — for all seven classes Class 1A-7A. Here is the third installment:

The 6-foot-9 Yale recruit was dominant. Basa-Ama (pictured) posted a double-double (25 points, 10 rebounds) in the semifinal victory over Chaminade-Madonna and came back with 23 & 7 in the state title victory over Jacksonville Andrew Jackson. The senior made 15 of 27 field-goal attempts and 18 of 21 free-throw attempts at the final four. Had 3 blocks vs. Chaminade.

The 6-6 senior was the heart and soul of the Andrew Jackson squad. The Warner University recruit had 8 points, 11 rebounds and 3 blocks in the semifinal W over Community School of Naples. He played 30-plus minutes vs. St. Andrew’s, putting up 14 points, 7 rebounds and 2 blocks. West shot 80 percent from the free-throw line.

Minott is one of the top prospects in South Florida in the junior class. The 6-8 forward posted a double-double (19 points, 10 rebounds, 2 blocks, 2 steals) in the victory vs. Chaminade-Madonna and contributed 13 points, 4 rebounds and 2 steals in helping the Scots to the state championship over Andrew Jackson. Minott shot 13 for 25 from the field in the tournament.

Beshears and Community School of Naples were eliminated by Andrew Jackson in the semifinals but not before the 6-2 guard poured in 22 points and had 3 steals. He made 6 of 12 field-goal attempts and connected on 9 of 11 from the free-throw line. Beshears is headed to Northwestern on a baseball scholarship.

The 6-2 guard also only got one game in in Lakeland but made the most of it. Franklin canned 6 of 11 from the field — including 3 of 4 from 3-point land — on the way to a 19-point, 6-rebound, 4-steal performance. He played all 32 minutes of the loss to eventual champion St. Andrew’s. Franklin is headed to Miami on a football scholarship.