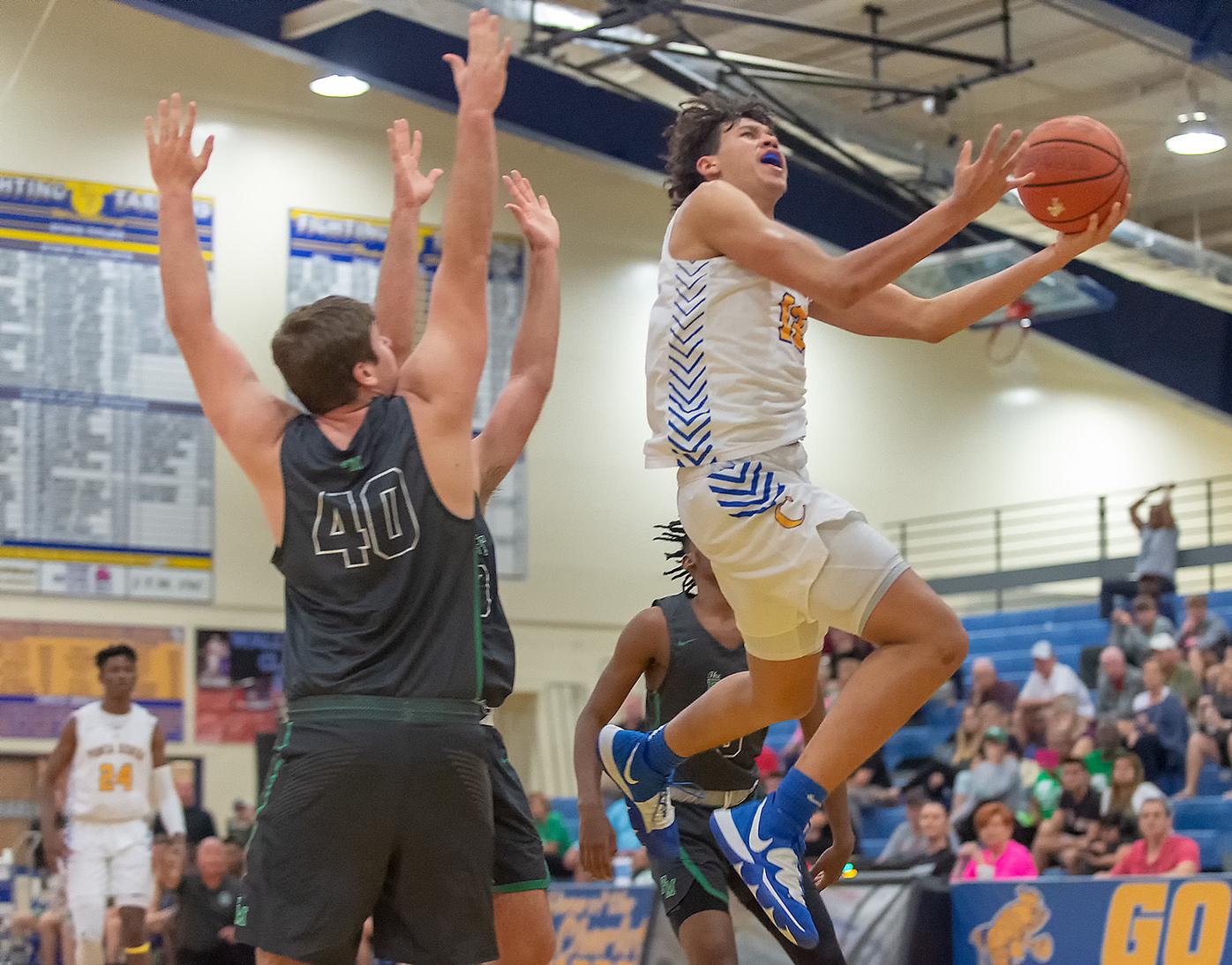 In this report, we look at some of the better teams from the west side of the peninsula that caught our attention.

The Ascenders will once again be considered among the national elite of high school programs this coming season but they will have a bit of a different look based on what we saw at the Fall Festival.  Moussa Diabate, a 6’10 senior, and Gus Yalden, a 6’8 sophomore, would be considered the only “interior” players on the squad.  That is a bit misleading as both can step out on the perimeter and make plays, whether it be connecting on jumpers, driving to the basket, or getting the ball to open cutters for easy scores.  The rest of the squad are all long, athletic, and talented wings.  Tamar Bates, a 6’4 senior, has the highest profile of the newcomers.  He is a dangerous perimeter shooter, solid playmaker, and active defender.  Eric Dailey, a 6’7 junior, showed off an all-around game as he played the role of point forward.  He got teammates involved, organized offensive sets and out-of-bounds plays, and scored from all three levels.  Jett Howard, a 6’6 wing (he’s listed on the roster as Class of 2021 but has been Class of 2022 for as long as we can remember) previously at U-School, continues to show off a dangerous perimeter shot and the ability to score in a crowd at the basket.  The rest of the newcomers (6’3 freshman Anthony Gilkes, 6’8 senior Ezra Ausar, 6’5 senior Louis Hutchinson, and 6’5 senior Josh Ozabor) all appear capable of playing and defending a variety of positions on the court.  Two expected starters, 6’2 junior Jaden Bradley, and 6’8 junior Jarace Walker, were not in attendance.

The Tarpons were victorious in its two games on Sunday and brought a large contingent of players.  The main player was 6’8 senior Tre Carroll.  In looking over out notes for both games, there really wasn’t anything Carroll didn’t do well.  No matter what role was thrust upon him by the coaches or what game situation he found himself in, Carroll found ways to make the right play the vast majority of the time.  Whether it was scoring, grabbing rebounds and pushing the pace, finding teammates for easy baskets, or challenging opponents at the rim, he got it done.  Carroll got help from the sophomore combo of 6’5 Tynan Becker and 6’6 John Gamble.  Becker was one of the better finds of the event.  He is a confident shot maker and does a good job of helping out on the boards.  Gamble is well-known for his athleticism and ability to make an ordinary play look spectacular.  There is certainly some skill work to be done on his part but he has the highest of ceilings.  Expect senior guards Isaiah and Alex Gent, both 5’9, and 6’0 junior Daron Woods to be key contributors as the season moves along.

If there is one thing Head Coach Loren Jackson does (other than win) it is finding guys with size to play at Victory Rock.  Of the ten guys on the roster, five were 6’9 or taller, and all of them contribute.  Still, maybe the key guy is 6’0 senior Kevin Miller.  He is tasked with keeping things in order.  Miller is quick and crafty with the ball as well a guy that can score on either side of the arc. Prince Monsengo, a 6’9 junior, continues to show improvement in his all-around game.  He has become a much more consistent perimeter shooter since last season, and a more confident ball-handler as well.  Monsengo is quick to rebounds at both ends of the floor and an active defender.  Jamine Charles, a 6’11 senior, is also back.  He knows his role is to protect the rim, grab defensive rebounds and get the ball out quickly to start the break, and make the most of his opportunities when the ball finds him near the basket on offense.  Of the newcomers, the most impressive was 6’9 senior Leonard Miller.  He’s long and athletic with a solid stroke to the arc, is a good shot blocker, and defends multiple positions.  Expect junior guards Terrance Ford and Jaden Andrews, along with 6’6 wings junior Bronson Borlace and senior Steven Olwoniyi to provided perimeter support to the bigs inside.

The Canes (aka Bishop McLaughlin)

The Canes made a quick trip to The Big House, playing in the first and third session of the event and then heading back to Spring Hill.  This was the first time out since the COVID-19 shutdown began for highly regarded 6’4 junior Emanuel Sharp.  We caught him in the team’s second and final game of the day.  Despite playing with a mask on and not being entirely in basketball shape, Sharp was still, well, sharp.  His three ball was dropping with regularity and he found creative ways to score at the basket.  We have him unofficially scoring eighteen points in the first half.  Sadly, that was the only half he would play as he spent the second half on the bench with ice on his hand after a collision just before the end of the first period. Without Sharp, it was Dillon Mitchell, a 6’8 junior, that stepped up for the Canes.  The lefty flipped the switch from secondary to primary option, continuously getting to the basket on the drive and either scoring or getting to the foul line.  A good rebounder and surprisingly effective rim protector coming over from the help side, Mitchell is worth of the high major interest he has been receiving.  Anthony Davis, a 6’5 junior, contributes with forays to the basket and pursuing rebounds on both ends of the floor.

Last year, the Crusaders were a senior-dominated team that reached the final four in Lakeland.  This year, they could be one of the youngest teams in the Tampa Bay area.  Their roster at the Fall Festival featured just two seniors while holding a total of seven sophomores and freshman.  Eddrin Bronson, one of the few freshmen on last year’s team, appears to be the leader of the “young guns”.  The 6’1 sophomore took on the lead scoring role, making several perimeter shots while also finding opportunities to rack up some assists.  The additional game experience will certainly help make him better.  Karter Knox, a 6’4 freshman, has no fear taking on the mantle of “next” in his athletic family.  Already, he is a confident and accomplished scorer and playmaker.  He’s got a solid frame on him for a young player and is a high-level athlete.  Karmelo Branch, a 6’3 sophomore, will likely be a very important option as the season moves along.  He’s a reliable shooter out to the arc and helps out greatly in the rebounding department.

Changes to the schedule didn’t allow us to watch this group play, but the buzz in the facility surrounding them made us wish we had.  They may be the best perimeter shooting team in the state this year, as the club put up some high scoring numbers in games with a running clock.  Dean Gabrelcik, a 6’5 senior, has become much more than just a catch-and-shoot guy.  He showed time and again this weekend that he can score off the dribble, both with his jump shot as well as forays to the basket.  Anthony Bittar, a 6’4 senior, scored in double-figures in three of the four score sheets we could get our hands on.  His stat line was littered with both threes and twos.  Mikey Shane, a 6’0 senior, also gets his name in the scoring column a ton.  Add in 6’0 sophomore Henry Hurst and opponents have a four-headed scoring monster that is hard to contain.