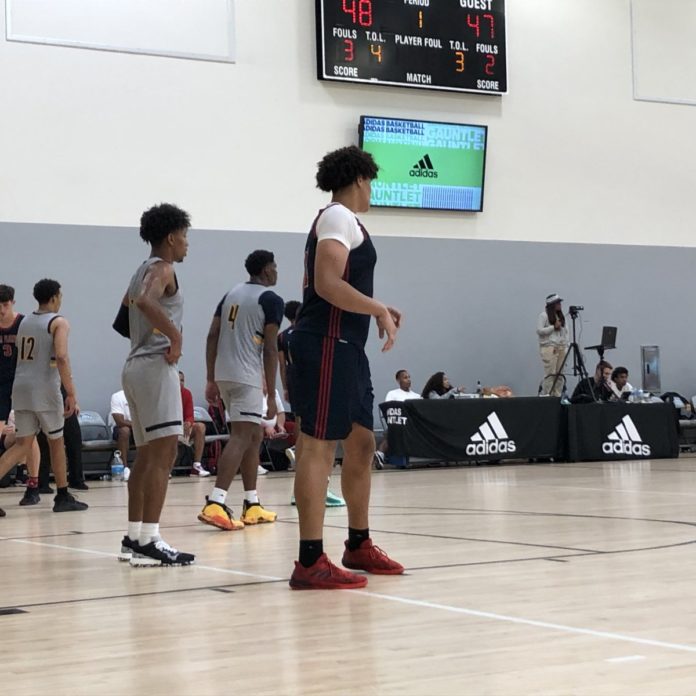 This category is annually the most challenging.  This year it was particularly difficult to narrow down a lengthy list of very worthy candidates in each class to just one nominee.  As such, we decided to go “Two for One” in this category, identifying a pair of players from each class that enhanced their recruiting profile.

Andre Weir, a 6’8 forward for Team Florida, had been hobbled by injuries during the last couple of high school seasons, so his play this spring and summer was going to be key to his future.  He averaged twelve points and seven rebounds an outing on the Adidas Gauntlet circuit and had one 20-20 outing where he scored 24 points and grabbed 20 rebounds in a single contest.  Weir is a unique player in this day and age.  He isn’t hyper-athletic, bouncy, or a candidate for highlight reels.  He’s a load to handle inside where he scores with either hand around the basket, can beat the opposition by either rolling to the rim and scoring inside or moving away from the ball-screen action and connecting on perimeter jumpers.  Weir has range to the arc when given some time and space.  He is a physical post defender, challenges cutters in the lane, and dominates his rebounding area.

There was some question as to how 6’3 guard Devin Carter of Team Knight would fare on a national basis.  He was one of the top underclassmen in talent-rich South Florida, but equaling that type of output (20+ppg) against national competition on a stage such as the Adidas Gauntlet circuit is an entirely different endeavor.  After a “pedestrian” eleven point outing in his first game with the team, Carter found his footing and went on a scoring spree that lasted thru July.  At the Bob Gibbons’ Tournament of Champions, Carter was named MVP of the event after leading the team to the championship.  In July, he averaged just over 20 points a contest while shooting over 50% from the field, including a sizzling 52% from three-point range.

It did not take long for national scouts and high-major college coaches to take note of Ernest Ross.  The 6’8 forward for Game Elite was one of the few underclassmen to play up on the 17U level in on one of the three “shoe circuits”.  While Ross’s numbers weren’t gaudy, it was his potential that got attention.  Ross is long, wiry, bouncy, and plays with great energy.  He is quick off the floor for lobs, rebounds, and putbacks, gets baseline to baseline swiftly in transition, can step out and guard on the perimeter, and challenges shots at the rim.  No doubt he will improve on any skill deficiencies he has over the next couple of years.  Ross has already earned several high-major offers and certainly more are on the way.

It was definitely a good spring and summer for Alex Fudge of Team Parsons 16U.  The 6’7 wing showcased his versatility and potential at just about every event the team took part in.  While his perimeter shooting is still a work-in-progress, Fudge must now a least be respected by the defense out on the perimeter.  That opens driving lanes and with his quick first step and ability to elevate quickly over the defense, makes him tough to defend.  When the pace of the game is up-tempo, that is when Fudge is at his best.  He has the ability to grab a rebound, outlet the ball, fill a lane, and finish above the rim before the defense can get back in position.  Mid-majors have taken notice and issued several offers while high-majors have Fudge on their watch list for this coming season.

It is very likely that Ven-Allen Lubin established himself as player to watch for schools outside of Florida.  The 6’6 forward for Team Parsons showed that he can step out and play on the perimeter and make just as much of an impact as he did when playing near the basket this past high school season as a freshman.  An excellent athlete with improving ball-skills and respectable outside shot, Lubin was very productive on both the 15U and 16U levels this spring and summer.

The Florida Rams played up a level all year as a 16U team and were highly successful.  A car accident that sidelined four players and a buzzer beating jumper in OT was all that separated the team from winning the AAU 16U Nationals.  A week later in Vegas, they won the 16U division in a national tournament.  Key to that success was the play of 6’7 Malik Reneau.  With excellent basketball instincts and touch around the rim, Reneau is a dominant scorer from ten feet and in.  With great hands and excellent timing, he controls the interior as a rebounder and shot-blocker.  Reneau doesn’t wow on-lookers with great bounce, but his basketball IQ and high-skill level more than compensate.