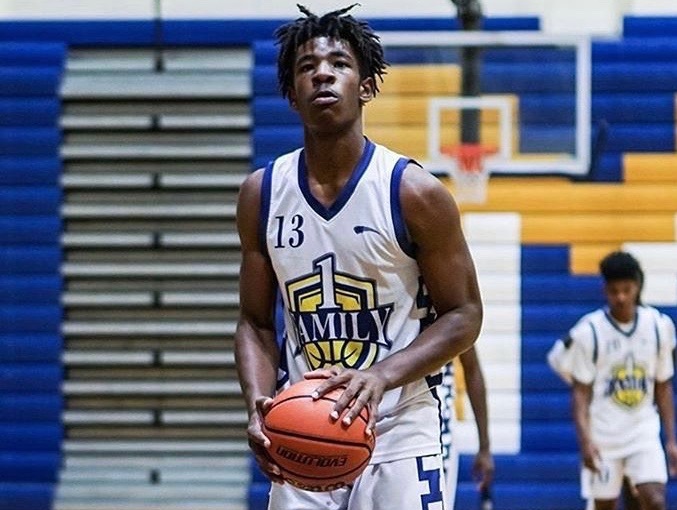 It is always a challenge to pick THE player for this category.  Every spring and summer, we come across players that either we had not seen play or their performance was under-whelming when viewed in action with their respective high school team, but then “ball out” in a different setting.  These guys definitely fit the bill.

Seeing 6’8 David Green play this spring and summer was a big change from our first viewing of him in a playoff game with Ocoee.  He showed a great deal of offensive diversity with his ability post up and score inside, connect on shots from the perimeter out to the three point line, and put the ball on the floor from the high post and short corner areas of the floor to score at the basket after one or two dribbles.  Green has a solid frame, plays with an active motor, and competes well on the glass at both ends.  He’s got a bit of “Draymond” in him, though we don’t think they are related.  This Green has become one of the better inside/out performers in the state’s rising senior class.

We were very impressed with the play of Landfall Elite 16U this year, and Micah Octave was the most impressive of that group.  The 6’4 wing is super-slithery when it comes to getting to the basket from just about anywhere on the perimeter.  Not just a straight-line driver, Octave has quick change of direction and change of speed moves that he uses in a number of combinations to obliterate defenders.  Once at the rim, he finishes well in traffic and thru contact.  Octave spends a lot of time at the foul line and is quite successful once there.  He is also a pest on the defensive end, where his length, quickness and ability to anticipate the next pass cause trouble.  Octave is an active rebounder at both ends of the floor.  We must admit we didn’t see many perimeter shot attempts, but when you can get to the basket and score close in as well as Octave can, you don’t necessarily need one…yet.

We initially heard of Jean Montero from a coach of the Dominican National Team. We got our first glimpse of the 6’2 guard this spring in action with the Nightrydas Elite 15u. However, his “coming out party” took place in the summer where he averaged just over thirty points a contest in the FIBA U16 Americas Championship, leading the Dominican National Team to the Bronze Medal and later was named the MVP at the Basketball Without Borders event, a major international scouting combine that attracts college and NBA scouts alike. Going through the box scores of the Nike 15U Peach Jam, it appears Montero  missed the first two games of the event for the NightRydas. Montero then came in and put up 25 points a game on 50% shooting from the floor to go along with 4.5 assists an outing to help lead the squad to the title.  Doing a bit of research, we came to discover that Montero played at DME Academy this past season.  However, we don’t recall Montero playing for the “main” HS team with Moussa Diabate and others.  There is some question as to where Montero will play this coming high school season.  If it is in Florida, he is a must-see.