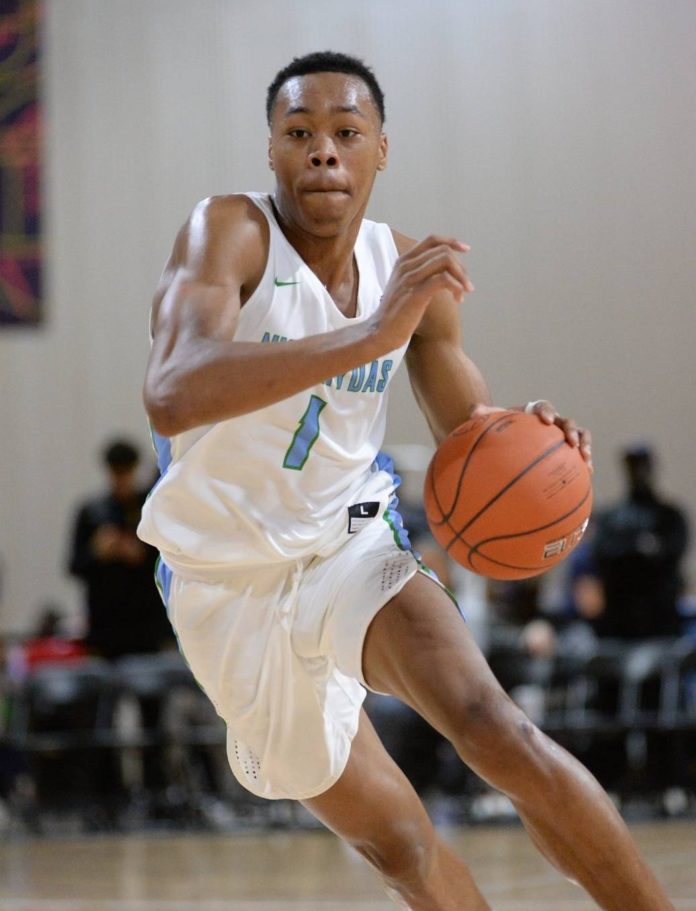 We continue our “awards ceremony” to bring you the best of the spring and summer from Sunshine State players. This category, Most Outstanding Player, is simply based on who performed the best regardless of team success.

If we just left it at Scottie Barnes was 2nd Team All-EYBL this year, that would probably be enough to earn Barnes the MOP.  While his stats of 17.4 ppg on 51% from the field, 8.5 rpg and 7.0 apg are certainly high level, Barnes accomplished a lot more outside of the shoe circuit.

He went out to the Pangos All-Star event which was loaded with quality talent and was considered a top four player in attendance.  He was a strong candidate for the camp overall MOP with a stat line of 12 ppg, 6.5 rpg (#3 overall) and 5.5 apg (#1 in camp).  Despite logging just three points in the Top 30 All-Star game, observers felt his quality passing, vocal leadership, and defensive intensity had as much to do with his team winning as anybody else’s contribution.

Barnes was also a key player for the gold medal-winning Team USA at the FIBA 19U World Championships.  His versatility on defense and his passing instincts were critical factors in Team USA’s success.

Barnes is supposedly going to play his final season at Montverde Academy, arguably giving the Eagles two of the highest Hoop IQ guys in the country along with Cade Cunningham.

Mousa Diabate played up for the NightRydas for just one session in the EYBL, finishing with a four game average of 6.5 points and 5.8 rebounds.  Not bad for playing up in a challenging environment, but not earth-shaking either.

Diabate made his case for being one of the better talents in the national 2021 Class at other events.  He too went to the Pangos Camp where he averaged almost sixteen points per game. Diabate also led the camp in rebounding at seven a contest.  He didn’t stop there.

Diabate ventured to the NBPA’s Top 100 camp, one of the few underclassmen in attendance.  Veteran talent observers thought he was one of the thirty best players overall at the event and the #5 power forward in attendance.

A member of the French National Team, Diabate also earned praise for his efforts at the FIBA U18 European Championships.  He was third in the event in rebounding at 11.5 per contest and contributed a double-double each time out, as he averaged 11.2 points a game.  Diabate also proved to be a rim protector, swatting away just over two shots a game in the event.

Moving over to IMG Academy for his junior season, Diabate will be part of a very talented team that will contend to repeat as mythical national champs.  He will also get better going up against other talented bigs such as 7’0 senior Mark Williams and 6’10 classmate Brandon Huntley-Hatfield on a daily basis.

The NightRydas won the 15U Peach Jam title in July which is no small feat.  Key to that championship run was the stat-sheet stuffing of Greg Glenn.  For the event, he averaged fourteen points a game on 61% shooting from the field, was one rebound away from averaging eight rebounds a contest and also averaged 3.5 assists an outing.

Glenn also excelled at some of the top individual national events.  He attended at the Nike Elite 100, the top camp in the country for underclassmen, and impressed veteran scouts with his tenacity, high-level athleticism and defensive versatility.

He also made the U16 USA Team and performed well at the mini-camp in Colorado Springs.  Seasoned observers made note of Glenn’s versatility and ability to create match-up problems, especially on the defensive end where he proved he could guard every position.  Some called his game “not pretty, but effective”.  Hey, whatever works.