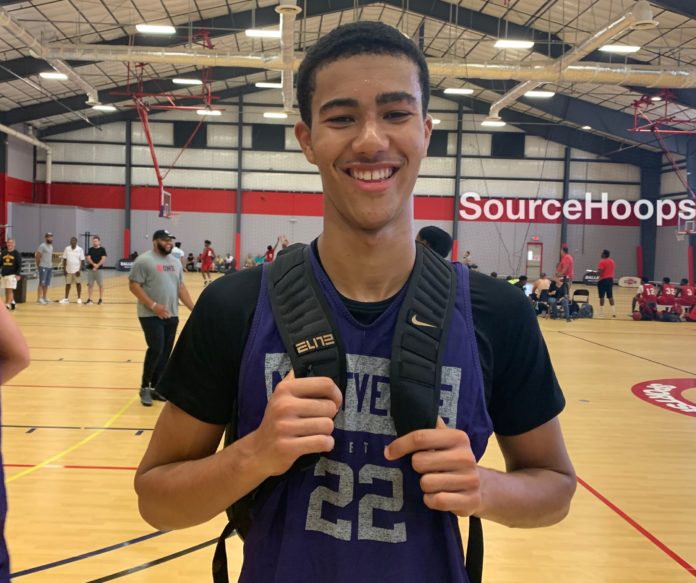 After a mega-event like the Hoop Exchange Fall Festival Showcase, there is a lot of information to digest.  Teams from as far away as Tallahassee to the north and Miami to the south attended so there were several games where teams from different regions of the state played each other.

The Eagles, a perennial national power, look to continue their upper-echelon level of dominance based on what we saw on Saturday.  Likely without four senior starters this past weekend, the talent that did hit the floor was high-level.  It wasn’t a tall group, as only 6’8 sophomore Caleb Houston (pictured above) stood taller than 6’4.  That was fine as the Eagles gang-rebounded at both ends of the floor and displayed a blistering transition game and well as an aggressive defense.  Houston showcased an ability to play both inside and out and has greatly improved his perimeter shooting since last season.  Zeb Jackson, a 6’3 senior from Ohio already committed to Michigan, made a very impressive debut.  Extremely quick to the bucket with the ball and an ability to finish in traffic, Jackson produced more than his fair share of highlight finishes.  While he was 0-3 from the perimeter in the game we watched, the shots looked good going up.  Dariq Whitehead, a 6’4 sophomore, and Langston Love, and 6’4 junior from Texas, also proved to be scoring threats from the arc to the basket.  Their individual strength and athletic ability helped the Eagles stay competitive on the glass at both ends of the floor.  Ryan Nembhard, a 6’1 junior, played well in his role as a facilitating point guard.  He took care of the basketball, made good decisions on the move, and played harassing defense when guarding the ball.

The SIAA power out of Gainesville has re-tooled for another run at an SIAA state title as well as national notoriety.  A couple of carryovers in the backcourt, 6’2 junior Kyle Duke and 6’4 senior Alec Oglesby, were big in setting the tone for the Lions.  Duke is a quick point guard that gets to the rim with ease and has the ability to finish over defenders once there.  His outside shot is improving and he can be a demoralizing defender with his long wing span, quick feet, and ability to anticipate where the ball is heading.  Oglesby, a Cleveland State commit, has greatly improved his ability to drive the ball to the basket and score to complement his stellar outside shooting.  Jalen Speer, a 6’0 senior that transferred in, is coming off a big spring and summer.  His ability to score from all three levels as well as facilitate the offense will be a big part of The Rock’s game plan this coming season.  Kendall Lang, a 6’2 senior originally from Georgia, is a strong athlete that plays with great energy, finishes in transition, and plays bigger than his size when pursing rebounds.  Lenzy Hancock, a 6’7 senior from Jacksonville and 6’8 junior Atrial Washington, a Georgia native, patrolled the paint for the Lions.  Both showed an ability to step away from the basket and handle the ball.  A future bright spot for The Rock is 6’8 Ray James, Jr., an 8th grader, who played very well given the talent level he was competing against.

One of the top teams in the SIAA, the Flame don’t have an abundance of size but their perimeter talent will burn defenses and get buckets.  Selton Miguel, a 6’5 senior, is at his best using his strength to attack the basket but he’s also a competent outside shooter that must be respected.  He is also a surprisingly effective passer when heading hard to the hole.  Anderes Stanton-Mcray, a 6’4 senior, has come aboard and has a great deal of versatility.  He can play a variety of positions on the floor, scores well from all of them, and brings a dominating mindset to the defensive end.  Junior guards A.J. Neal and J.J. Harris provide The Flame with additional offensive power.  The 6’1 Neal has deep range on a quick release jumper and routinely starts scoring runs by hitting multiple shots behind the arc in succession.  He has also gained strength over the course of the spring and summer and has become better at driving and scoring.  Harris is wired to score, is effective at coming off ball-screens to knock down jumpers, and finishes well on both sides of the basket.  Sophomores Fray Nguimbi (6’7) and Moe Sabiu (6’8) provided plenty of interior scoring, rebounding, and rim protection this past weekend.  Nguimbi was particularly active in running the floor for scores as well as pursuing and flushing missed shots by teammates.

The Pioneers may be young this season, with only one senior expected to contribute, but it is certainly a talented cast.  While they will certainly miss the size they have had in the past (6’8 Emmitt Williams in 2017-18, 6’9 C.J. Walker in 2018-19), the team is loaded with players around 6’4 or 6’5 than can shoot, handle, and pass the basketball.  The lone senior is 6’5 Keanu Calderon.  His perimeter shooting as well as his ability to find open teammates for good looks played a big part in Oakridge’s game plan this past weekend.  Mike James, a 6’4 junior, was impactful at both ends of the floor.  He showed an ability to drill jumpers from beyond the arc, get out quickly and score in transition, and finish thru contact at the basket.  Rodrick Henry, a 6’5 junior, stood out as a “versatile glue guy” with his ability to rebound, block shots, score on short drives and jumpers, and defend a variety of positions. Lewis Jones, a 6’5 sophomore, doesn’t yet have the offensive polish of his older teammates but he plays hard, makes hustle plays, and doesn’t try to do more than he is capable of.  Jalen Smith, a 6’2 junior, was solid in his role of facilitator but also proved to be a reliable scorer from the perimeter and make the right reads when pushing the pace.

This is an intriguing group with youth, size, and offensive fire power.  Also, it’s a team that doesn’t shy away from a challenge as their two games on Saturday came against Montverde Academy and The Rock School, two of the more talented teams in the field.  Wesley Cardet, a 6’5 junior combo guard, is solidly in the top fifty in the country in the 2021 Class.  He was at his best on Saturday when getting downhill to attack the rim.  Tyreke Francois, a 6’0 senior, complemented Cardett with his ability to score from beyond the arc.  Francois is also very quick with the basketball in his hands and finds it easy to breakdown the defense off the dribble.  Inside, freshmen twins Matthew Bewley and Ryan Bewley, performed well beyond their years on Saturday.  Physically advanced at 6’8 with long limbs and quick leaping ability, each proved adept at rebounding outside of their area, challenging shots in the lane, scoring around the rim, and making short perimeter jump shots.