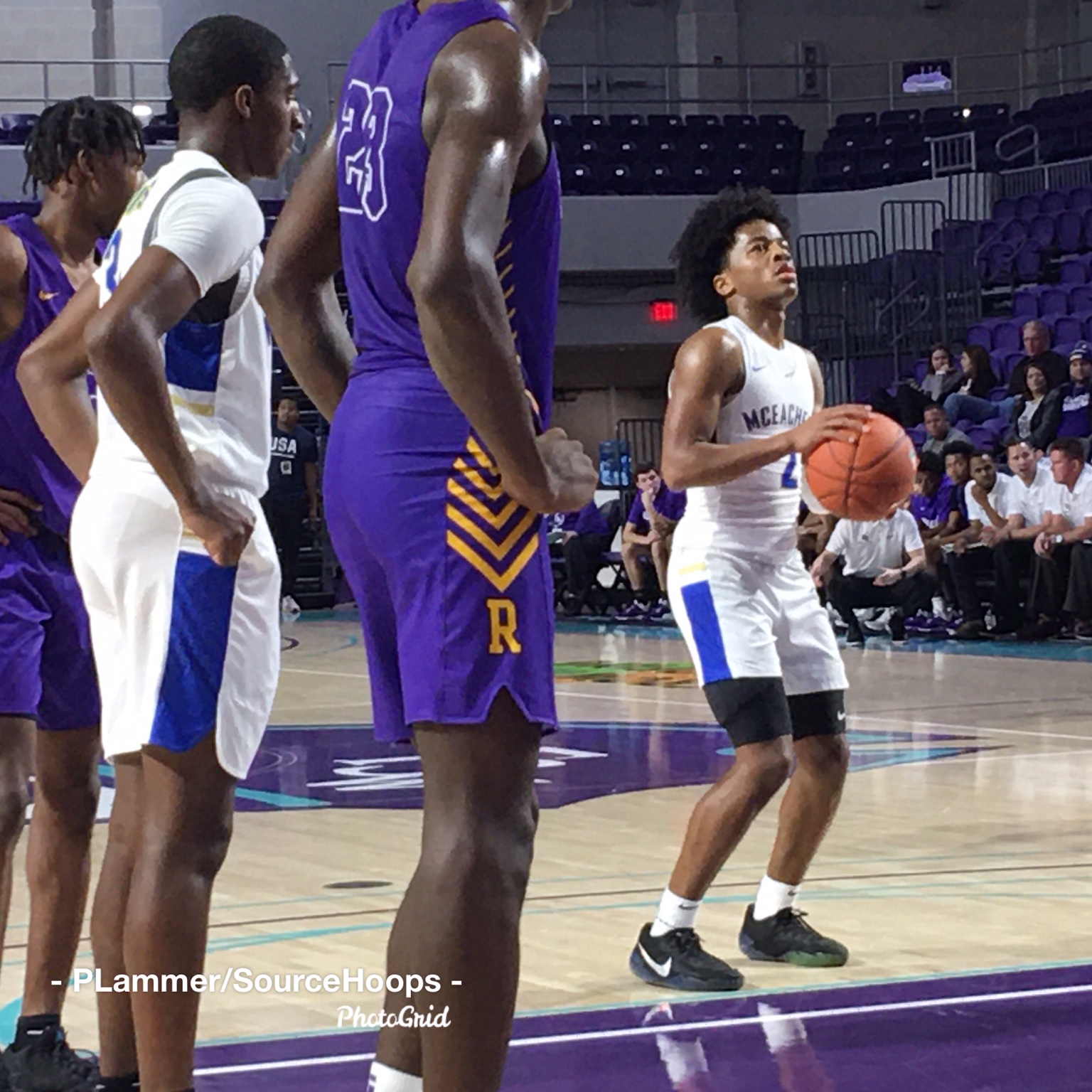 Defending champion McEachern High, out of Powder Springs, Ga., highlighted Day 1 with a 69-65 victory over Philly Roman Catholic. Auburn 2020 guard recruit Sharife Cooper poured in 29 points to go with 7 rebounds and 4 assists to lead the Indians and earn the day’s MVP honors.

Cooper connected on 8 of 17 from the field and made 13 of 18 free throws in playing all 32 minutes. McEachern trailed 17-9 after one quarter but outscored Roman Catholic 60-48 the rest of the way. Cooper continually probed into the defense and caused problems, especially in the second half where he had 19 of his 29 points.

The 6-foot junior guard blistered the nets for 36 points, including drilling the game-tying 3-pointer late to send the game into overtime. Harmon played all 36 minutes, shot 15 for 34 (6 for 19 from 3) and played an excellent floor game. Harmon is not just a shooter. He took good shots and passed off (9 assists) when it made sense.

The 6-foot-10 Duren, one of the top prospects nationally in the sophomore class, showed why. Duren put home 21 points on 10-of-12 shooting and hauled down 16 rebounds. Williams also had 21 points on 8-of-17 shooting.

Davis — a University of North Carolina recruit — went 9 for 9 from the free-throw line to finish with 22 points. The 6-1 guard made 6 of 12 field-goal attempts and also had 4 assists and 2 steals. Griffin knocked down 8 of 15 from the floor (including three 3s) and ended up with 21 points. Griffin is an early commitment to Duke.

The 6-4 Joseph — who is being recruited by Southern, Southeastern Louisiana and Lamar — was the difference in the game. On the offensive end, Joseph poured in 21 points. He drilled three 3s and made 8 of 10 free throws. Defensively, Joseph was key in forcing 18 St. Louis Vashon turnovers. He had a key steal and two made free throws in the final minute. Joseph brings the energy and is the Hornets “glue guy.”

McCollum, a 6-1 junior, played all 36 minutes against Marshall County and finished with 16 points and 5 assists. 2020 big Cayden Baker posted a double-double (16 points, 18 rebounds). McCollum has a basketball offer to Missouri Baptist and interest from USF, FGCU, FAU, New Orleans, Columbia, William & Mary and Drake. Baker signed to play football at UNC Wednesday morning. He is a 6-7 offensive lineman.

The 6-1 junior kept Briarcrest close. In playing all 32 minutes, he hit 10 of 20 from the field to finish with 25 points, 7 rebounds and 3 steals. Teammate Marcellus Brigham added 21 and 8 rebounds.

Clark put up a double-double (18 points, 14 rebounds) in the loss to Scotlandville Magnet. The 6-7 wing hit on 7 of 13 field-goal attempts, four of which were 3s. Kentucky recruit Cam’ron Fletcher was held to seven shots and 9 total points.

Charlotte High had few answers for the 6-9 senior center. Reynolds — a UCF signee — canned 6 of 12 field-goal attempts on the way to a 18-point, 11-rebound, 5-block performance. His hook shot from point-blank range gave Charlotte fits. Reynolds continues to work on his lift. T.J. Tampa added 14 points and 2 steals.

The 6-7 junior was about the lone bright spot on a Charlotte squad that hit 16 of 60 field-goal attempts. Carroll scored 24 points — including 9 of 11 free throws — grabbed 9 rebounds and had 2 blocks.