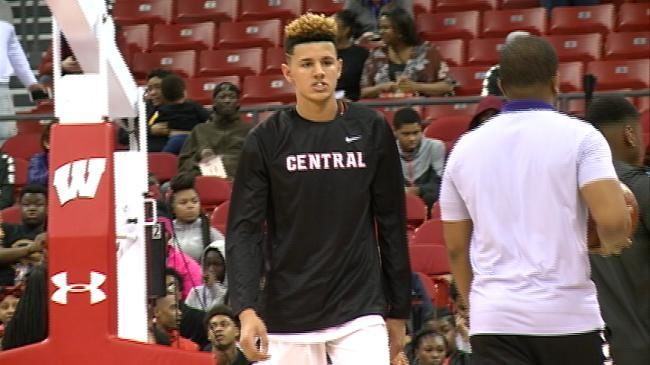 The first game in the City of Palms Signature Series featured La Crosse Central out of Wisconsin taking on Brunswick out of Georgia.  Both teams are highly respected and considered title contenders this coming season in their respective state classifications.

Central got out of the gates fast as Jordan Davis and Johnny Davis got them out to a 10-0 lead before Brunswick’s Joyful Hawkins connected on a mid-range jumper to put them on the board.  A three from Torrey Dickens of Brunswick made it a 10-5 score at the 3:31 mark but that was all Central would allow.  A three from De’Andre Davis kicked off a 10-0 run to close the quarter with the score 20-5 in favor of Central.

Hawkins and Dickens of Brunswick scored the first five points of the second period.  Central answered to stop the run and still led by fifteen at 29-14 with 4:22 left in the half.  At this point, Brunswick got on a roll, outscoring Central 17-4 over the rest of the period.  If it wasn’t Hawkins scoring from mid-range, it was Dickens or Sheydon Baggs connected on shots both in front of and behind the three point line.  When the horn to end the half sounded, it was anybody’s game with Central up by two at 33-31.

Central got off to a great start in the third quarter, outscoring Brunswick 12-2 to go up 45-33 with just over four minutes to play.  Eight of those twelve were courtesy of Johnny Davis.  Brunswick stopped the run with five quick points, but for the final three minutes of the third, their well ran dry.  Central didn’t set the world on fire either during that time, scoring just five points, but they still led by a dozen with one quarter to play at 50-38.

Brunswick’s last chance to take control of the game came with just under six minutes to play in the fourth period, down just nine at 52-43.  Central responded with a 9-3 run to put the margin at fifteen, 61-46 with three minutes left to play, essentially wiping away any hopes for a Brunswick comeback.  Central moves forward in the signature series with a solid 70-57 victory.

For Brunswick, Hawkins tallied 18 points while Dickens finished with 16 points.