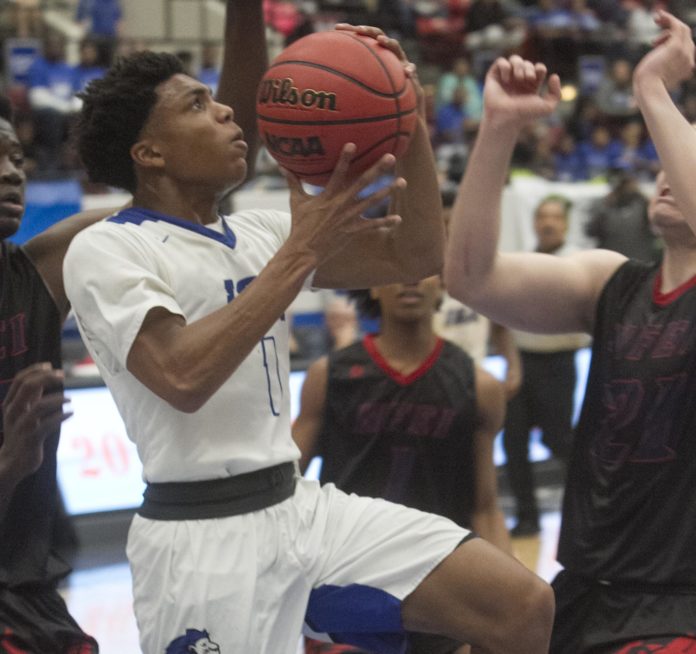 Saturday’s Hoop Fest at Windermere Prep did a great job of setting the table for the upcoming holiday tournaments that will be taking place across the state starting this week.  The host Lakers put together a solid set of five games that brought in teams from different parts of the state.

The Warriors of West Orange used their speed and quickness to great advantage to open the game.  Their pressure defense had the Bulldogs off-balance, forcing a time-out early on down 12-4.  The Warriors would grow their lead throughout the opening quarter to lead by fourteen at 29-15.  It looked like this game could get away early on from Melbourne.

Melbourne adjusted between the first and second quarters, throwing a zone a West Orange on the defensive end and taking better care of the basketball on offense.  Melbourne got to within ten at 33-23 midway thru the second period and when the halftime horn sounded, had come all the way back to take a 37-36 lead.

Melbourne’s run continued in the third quarter, starting the period with a 7-0 run that forced a West Orange time out.  Sadly for the Warriors, that stoppage in play didn’t provide any answers, as Melbourne continued to control the pace of the game.  Their lead would eventually grow and stay in the double-digits until the very end, winning a tougher-than-it-looked contest by the score of 64-57.

Both teams are capable of putting up big scoring numbers.  Tampa Catholic had a definite height advantage but Oviedo was able to offset that with some torrid shooting from beyond the arc early on to take a 10-3 lead with just under six minutes to play in the first quarter to force a TC timeout.  The Lions of Oviedo continued to outdistance Tampa Catholic over the course of the first period to lead by fifteen, 30-15, heading into the second quarter.

Tampa Catholic started a slow crawl back into the game, getting to within eleven, 40-29, with three minutes to go until the half.  At that point, Oviedo responded with an 8-3 run to close out the quarter and led by sixteen at 48-32.

Tampa Catholic was never able to threaten Oviedo until late in the final quarter.  With two minutes to play, the margin was only eight at 79-71.  The Lions would hold on at the foul line to win an entertaining and high-scoring affair, 90-78.

The First Academy got out to a 13-9 lead midway thru the first period but by the end of the quarter it was Lakewood Ranch that was on top, 20-18.  TFA ramped up its defense to start the second quarter and capitalized on Ranch’s mistakes.  A 13-2 run by TFA found them ahead by nine at 31-22 midway thru the period.  That lead would grow to eleven by the end of the half with TFA up by a score of 39-28.

In the third quarter, Lakewood Ranch would outscore TFA 14-6, bringing them to within three at 45-42 with one period left to play.  At the five minute mark of the fourth, Ranch tied the score at 49.  They were in a rhythm now and no matter what TFA tried, they could not grab the lead back.  Lakewood Ranch would hold on to win by the score of 55-53.

Many in the gym thought this would be high school basketball’s version of Ariana Grande’s song “Thank You. Next.” However, University came in ready for a fight and definitely played well enough in the first half to get Oak Ridge to stop thinking about their trip to Hawaii this week.  University was down just seven after one quarter and only twelve at 38-26 at the half.

However, that was as close as a loaded Pioneers team would allow them to get.  By the end of the third quarter, Oak Ridge was up by the score of 59-38, ultimately winning by a score of 80-48.

C.J. Walker, a 6’8 senior and Oregon signee led the Pioneers with 21 points while 6’7 Kaleb Coleman added 15 points as did 6’4 senior Niven Glover.

For University, only Carlos Mahua, a 5’9 senior, could get into double figures with 16 points.

The host school didn’t do itself any favors in scheduling an ICA team that reached the Class 2A Final Four last year and returned several key players.  Add to that a Lakers team that is young and is still trying to figure things out, and it could be a recipe for disaster.

But give Windermere Prep credit.  They came in ready to play, jumped out to an early 10-5 lead and didn’t panic after Impact got off the mat to tie the score at fourteen after one quarter of play.  Impact would control the second quarter, however, and took a 40-26 lead at the break.

The margin would get as high as twenty in the third period, but Windermere was not going away.  They closed the gap to fourteen at 54-40 entering the final period.  With four minutes remaining, the margin was only 60-49 but time was running out.  Impact would hold off the host Lakers at the foul line to win by a final score of 65-54.

Impact was led by 5’10 junior Jordin Jackson with 19 points while 6’5 sophomore Calvin Johnson did work inside and scored 19 points as well.

Jaden Williams, a 6’1 sophomore, paced Windermere Prep with 19 points of his own while 6’0 junior Jayden Williams added 14 and 6’8 freshman Kevin Zang contributed 11 points.