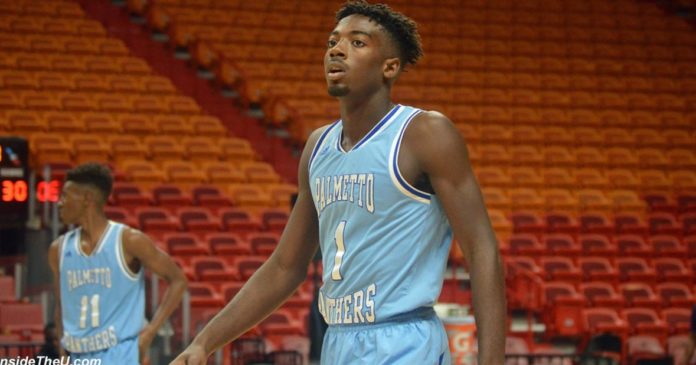 The final game in the Sunshine Series in this year’s City of Palms Classic features a pair of state title contenders from the large school divisions.  Palmetto is one of the favorites in South Florida to emerge in Class 9A while there is a real chance that Lakeland could make the final four in Class 8A.

A three from Lakeland’s Reese Yothers opened the scoring in the contest.  Palmetto answered with a bucket inside from Gary Bess.  A pair of baskets off of offensive rebounds by Reginald Hawthorne of Lakeland built the Dreadnaughts a 7-2 lead with five minutes left in the opening period.  Palmetto countered with an 8-2 run to grab a 10-9 lead after a steal and slam by junior Kentron Poitier with 1:30 to play in the quarter.  A.J. Gant of Lakeland tied the score at ten with a free throw but a buzzer beater by Jordan Lopez gave Palmetto a 13-10 lead after one quarter of play.

A pair a Luke Anderson buckets, a three and a driving lay-up, returned the lead to Lakeland early in the second quarter.  After a flurry of baskets by both teams, the score was 21-18 in favor of Lakeland after a long two by Yathers.  Palmetto resumed control after a 7-0 run highlighted by a three from Jovan Debrito.  Lakeland would go into scramble mode and with 3:33 left in the period, Trey Lane connected on a trey to tie the score at 26.  Palmetto closed out the half by outscoring the Dreadnaughts 7-2 to take a 33-28 lead into the locker room at the break.

Lakeland wasn’t out of it and proved that by going on a 9-1 run to get back to within a point at 45-44, forcing a Palmetto timeout.  The magic words must have been said in the Palmetto huddle, as they responded with a run of their own to go up 54-47 with 2:48 left in the contest.  Lakeland would get as close as five on their next possession, but time wasn’t on their side.  Palmetto was able to hold off Lakeland to win by a score of 60-52.

Lakeland was paced by Anderson with 12 points while Yathers added 11 points.