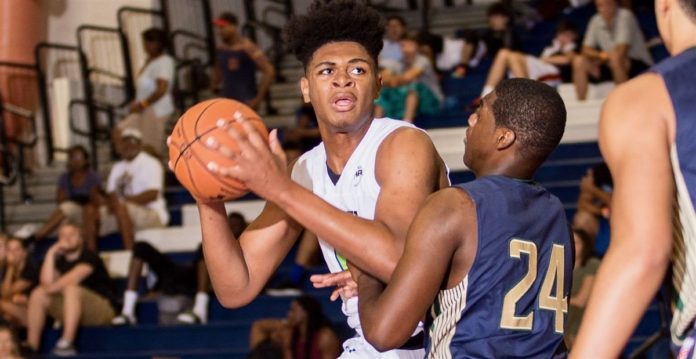 In this consolation semi-final, we get our first look at Immaculate Conception, a young team but very talented out of the hoops hotbed of New Jersey.  By all accounts, Miami Christian can be very good, as they were yesterday, or very bad, as they were against McEachern in the opening round.

The “good” version of the Victors showed up early as they raced out to a 9-0 lead within the first three minutes.  IC finally got on the board with a bucket inside from Eli Hutchins-Everett.  Miami Christian continued its torrid play with eight consecutive points to lead 17-2 with just over three minutes left in the quarter.  IC answered with five straight points of their own to end the quarter with the score 17-7 in favor of Miami Christian.

After scoring the first seven points of the third quarter, IC had built the lead to eighteen at 40-22.  Miami Christian responded with a 12-3 run over the net three minutes to cut the margin to single digits at 43-34 with just over three minutes to go in the period.  IC scored inside, but that would be their last points of the period as the Victors closed on a 7-0 run to get to within four at 45-41 heading into the final quarter.

Immaculate Conception once again built thier lead to eight after back-to-back buckets inside to lead 49-41.  Miami Christian cut the margin in half on their next two possessions.  IC built their lead back to ten after a 6-0 run and looked to have the game in hand.  That definitely wasn’t the case as Miami Christian started finding their range from deep.  With under thirty seconds left, Miami Christian hit a three to get to within two at 58-56.  IC wouldn’t fold and held off the Victors at the free throw line and win a close one by the score of 61-56.

Miami Christian was paced by Diego Rivera with 15 points and Gonzalo Gonzalvo with 12 points.