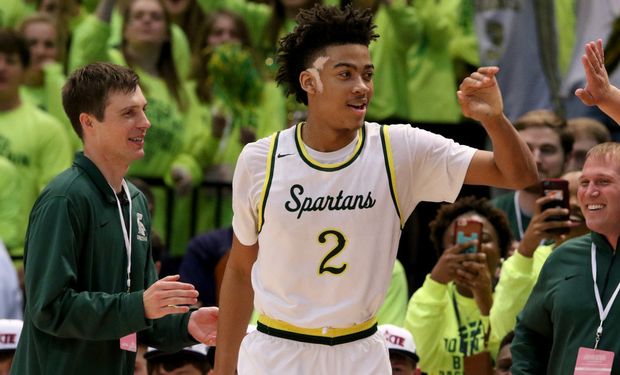 IMG comes in as one of the top teams in the country while Mountain Brook made waves in last year’s City of Palms with their versatile style of play.  It could be a matter of talent vs teamwork when it is all said and done.

Mountain Brook got on the board first with a driving basket by Colby Jones and another one from Trendon Watford.   IMG’s first points came on an inside basket by Armando Bacot.  Watford again scored for Mountain Brook but was answered by a bucket inside from Noah Farrakhan of IMG.  A pair of threes for Mountain Brook, one from Lior Berman and the other from Alex Washington, gave them a 12-4 lead with 3:17 left in the quarter.  Bacot scored inside for IMG to stop the Mountain Brook run but another three from Washington and one from Watford made the lead an even dozen at 18-6.  IMG woke up to score the final five points of the quarter to make it 18-11 after one period.

Jones of Mountain Brook scored on a drive to open the second quarter.  IMG closed he gap to four with a three point play from Jeremiah Robinson-Earl and a long two from Jaden Springer to make the score 20-16.  No problem for Watford of Mountain Brook as he answered with a personal 5-0 run to make it a nine point game at 25-16.  However, those would be Mountain Brook’s last points of the quarter.  IMG clamped down on the defensive end and started putting their size to good use.  They would close out the quarter on a 9-0 run of their own to tie the game at the half, 25-25.

Bacot scored for IMG to open the third quarter, which also gave them their first lead of the contest.  Watford responded for Mountain Brook with a pair of free throws.  After a pair of buckets from both teams, Mountain Brook scored five straight points after a three from Jones and a putback slam from Watford.  That spurt would give Mountain Brook a lead it would not relinquish in the third quarter.  However, a late three from Mikeal Brown-Jones of IMG got them back to within two at 48-46 at the end of the period.

A slam inside by Robinson-Earl and a steal and score by Farrakhan gave IMG a 50-48 lead one minute into the fourth quarter.  Watford got Mountain Brook on the board with a three point play to re-take the lead.  That lead would change hands several times over the next couple of minutes and with just under two minutes to play, the score was knotted at 62.  Paul Stramaglia scored on a drive for Mountain Brook which started an 8-0 run with Watford scoring four free throws and Berman connecting on a pair as well.  Now with thirty seconds left to play, IMG was down 70-62.  Mountain Brook was able to hold off IMG at the foul line to win by five at 72-67.

Watford was the player of the day with 38 points and 12 rebounds (he would have had forty but missed his last two free throws).  Berman added 11 point for Mountain Brook.