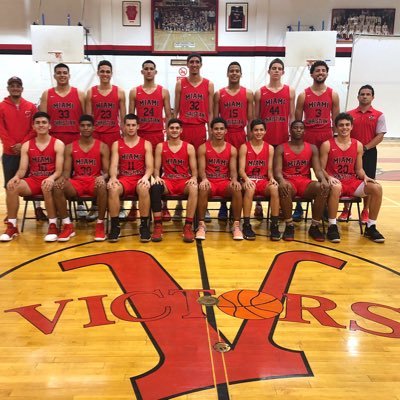 Both teams fell to opponents that reached tomorrow night’s semis, McEachern and IMG, respectively.  Gray Collegiate is an experienced group that has played together the past couple of seasons while the Victors of Miami Christian return only one player of significance from last year’s 2A state champs.

Gray scored the first two baskets of the game, a three from 6’4 sophomore Chase McDuffie then a transition basket from 6’1 senior Tommy Brunner.  Back-to-back threes from the Victors, one from 6’3 senior Gonzalo Gonzalvo and one from 6’2 senior Diego Rivera, gave them the lead.  Those buckets were also the start of an 11-0 run by Miami Christian.  Another three from McDuffie got Gray back in the game but Miami Christian was clicking on all cylinders and stretched their lead to 22-12 with a little less than two minutes left in the opening period.  Khalil Robinson of Gray hit a three to get back within seven but by the time the first period ended, Miami Christian was up 29-17.

The Victors scored the first five points of the second quarter before McDuffie hit another three for Gray.  With just under six minutes to play in the period, Miami Christian was up 37-22.  At that point, both teams kind of slowed down a bit to take stock of the situation, and there was no scoring for about four minutes.  Rivera of Miami Christian broke the drought with a driving lay-up but a 5-2 run by Gray got them back to within 41-27 with 1:30 left in the half.  Miami Christian wasn’t done, and finished the period with a 7-0 run, highlighted by a steal and score from Sebastian Martinez, to lead at the break 46-27.

The Victors opened the third quarter with a 7-1 run to grow their lead to 53-28 a little over a minute into the period.  Gray Collegiate would make mini-runs here and there throughout the third quarter as Brunner scored ten points over the course of period.  However, the Victors had an answer each time, usually in the form of a three pointer.  With one quarter left to play, the lead was twenty-five at 70-45.

Gray put up quite a fight in the final period.  A 7-0 run to start the fourth was helpful, followed by a series of three point shots by Brunner to get Gray on a roll.  That roll almost washed Miami Christian away as Gray got to within 89-78 with 1:30 left to play.  However, it was too little too late as Miami Christian closed out the final period at the foul line, winning by a score of 96-80.

Gray was led by Brunner’s 28 points, followed by 19 points from Chase McDuffie and 11 points from Khalil Robinson.