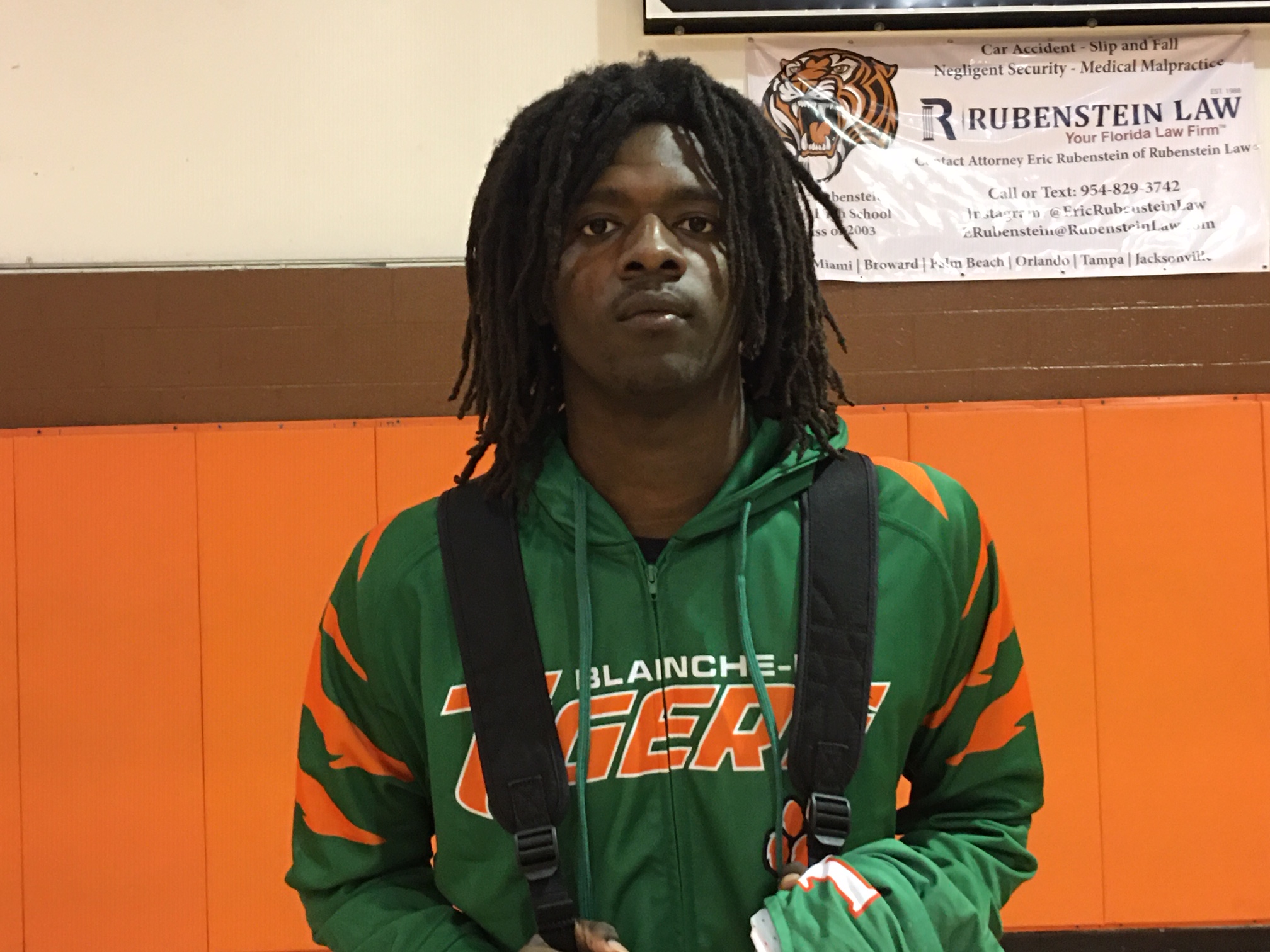 This game featured a much-anticipated match-up between 6’3 senior and Murray State signee Dion Blanch and 6’4 senior but unsigned Devin Carter of Doral.  East Lake came into the contest undefeated, but hadn’t seen the likes of team like Doral.  Doral led the entire contest but it wasn’t until the third quarter that they broke open the game to lead by twenty.  Blanch had two fouls in the first quarter and sat the majority of the second period.  He picked up his third a minute into the third and headed back to the bench.  Blanch scored fourteen of his eighteen points in the second half of the game but by then a victory was out of reach for East Lake as Doral won 64-52.

Devin Carter, Doral: The unsigned senior will be a wanted man.  While known more for his scoring prowess, it was his overall body of work that impressed on Saturday with a stat line of 29 points, 13 rebounds, and 5 blocks.  Carter proved to be a very good passer and made solid pass vs. shot decisions on the move.  He’s a voracious rebounder, very good on-ball defender, and can fill in at point guard in a pinch.  His perimeter shot may be a bit unorthodox but Carter has proven that he can knock it down consistently from a variety of angles and distances while being tightly defended.

Kameron Johnson, Doral: The 6’7 junior patrols the paint and is highly effective in doing so with his wide and strong frame.  He’s a hungry rebounder and productive interior scorer.  A good but not great athlete, Johnson does run the floor well and plays physically on both ends.  He still has a lot of potential, especially at the offensive end.  His best basketball is ahead of him.

Justin Johnson, Doral: The 6’7 freshman and younger brother, he has lots of skill and plenty of potential along with the time to reach it.  He plays well on the perimeter and makes open shots out to the arc.  Johnson is a good ball-handler with the ability to grab rebounds and push the ball up the floor.  He’s got some length, anticipates well on the defensive end, and despite a thin frame doesn’t seem to mind battling inside for rebounds and playing physical.

Dionte Blanch, East Lake: While it may not have been his best game, it was still solid.  He struggled with his outside shot and adjusted, getting to the basket later in the contest.  Blanch’s foul trouble kept him being more aggressive on defense where he is normally able to force turnovers.  No doubt this game will be used for motivation by Blanch and his teammates the rest of the season.

When catching up with Ely Head Coach Melvin Randall at the beginning of the day, he told us that he felt the team was starting play like Ely.  That could only be bad news for a Charlotte team that was heading into the game without their main weapon, 6’7 junior Tre Carroll.  The host Tarpons gave it everything they had and Ely never really pulled away, put the Tigers led throughout the contest on their way to a 59-51 win.

Dudley Blackwell, Pompano Beach Ely: The 6’6 senior and Iowa State signee is an excellent facilitator for the Tigers.  He is a gifted passer with high-level court vision.  While his perimeter shot may not be pretty, it has become more consistent and a viable weapon for him.  Also more consistent for Blackwell has been his effort on the court since arriving at Ely.  No matter how good you are, the bench will be your home if the effort isn’t there for Coach Randall.

Kolby King, Pompano Beach Ely: The 6’0 sophomore is a solid two-way guard for the Tigers.  King has a reliable shot out to the three-point line and is a strong straight-line driver and scorer at the basket.  He plays hard at both ends and is already a solid on-ball defender.  With Blackwell running the offense, King right now plays off the ball.  It will be interesting to see how his point guard skills develop over the next couple of years.

Tyreik Gainor, Punta Gorda Charlotte: The 6’3 senior took it upon himself to be aggressive on the offensive end with Carroll out.  A strong guard that is best when getting to the rim, he found a good amount of success against Ely.  A streaky shooter, Gainor has the ability to play and defend either guard position.  He handles and passes the ball reasonably well and gets to the foul line a bunch.

John Gamble, Punta Gorda Charlotte: The 6’4 freshman makes plays that simply can’t be taught.  He is the highest level of run/jump athlete.  Gamble has great length and good range on his shot.  He is still learning the game but makes great strides every time he hits the floor.  As his skills and game experience progress, so will his level of recruitment.

With two gyms and two games going on simultaneously, we couldn’t watch every game.  There were times when we did venture over and catch bits and pieces of other games.  Some players provided enough during those times to get a mention.

Javian McCollum, Fort Myers HS: Back from an injury suffered at the City of Palms, the 6’1 junior showed no ill effects.  He is a point guard that can score, is quick with the ball, and knocks down shots from a variety of distances and angles.

Jason Jackson, Sarasota Riverview: The 6’2 freshman displayed a combination of high basketball IQ, good size for the position, and a solid skill set.  Whether scoring or setting up teammates, Jackson is a valuable piece to Riverview’s squad.

Fanbo Zeng, Windermere Prep: The 6’9 sophomore is a highly skilled “big”.  A very good ball-handler and passer for his size, Zeng can play both inside and out.  He also has a deft shooting touch from the perimeter.

This game took place in Orlando Friday night and was U-Schools third game in four days, having previously faced state title contenders Calvary Christian and Schoolhouse Prep.  Oakridge led early in the first quarter but U-School put together a 9-0 run to take the lead.  The Sharks never let go of the lead but with the score tied at forty-three early in the final quarter, it looked like the Sharks may have stopped swimming.  U-School decided to slow the pace down, spread the floor, and look for good shots after ball-penetration or passing out of double-teams.  The strategy worked and U-School headed south with a 61-56 win and a 2-1 record in that three game gauntlet.

Taylor Hendricks, University School: The 6’8 sophomore was extremely impressive.  With 21 points and 14 rebounds, he controlled the lane at both ends of the floor.  Hendricks has a soft shooting touch and he can score from either side of the arc.  He also runs the floor well, battles for rebounds, has length and leap, and protects the rim.  Hendricks should add strength to what appears to be a solid frame and should be a desirable commodity for college coaches from the mid-major range on up.