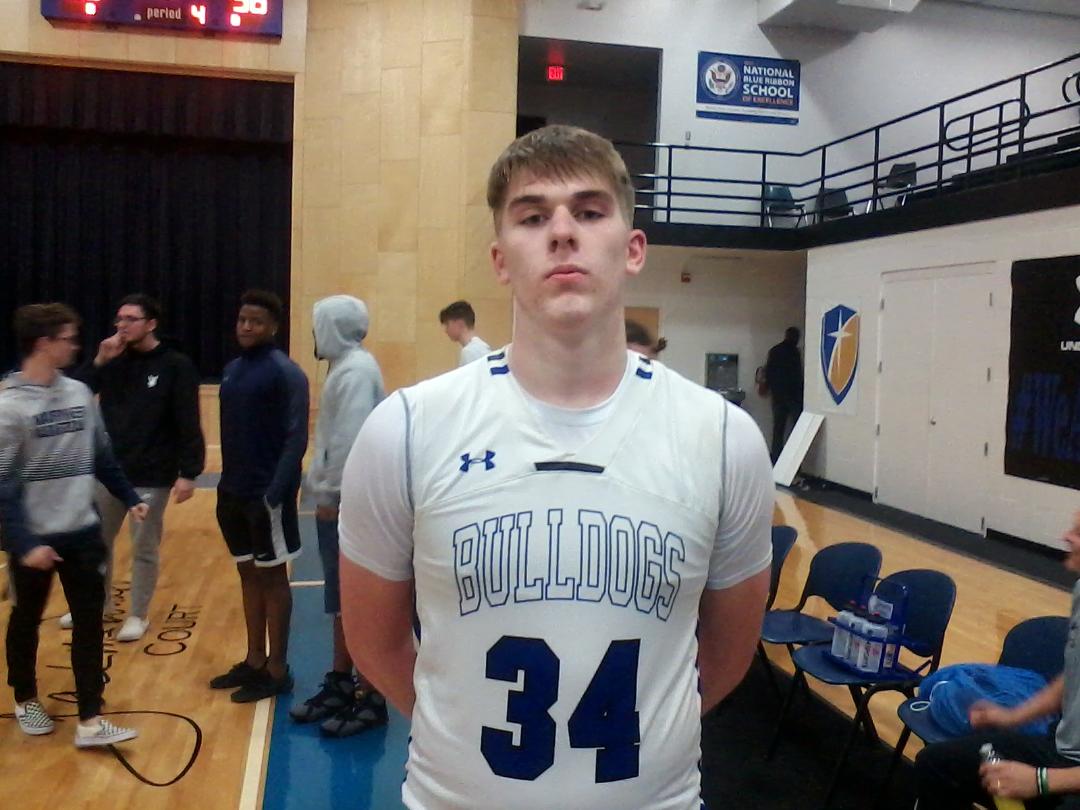 Coming into Tuesday night, there were only two undefeated teams in boys’ high school hoops in the Sunshine State: Ransom Everglades out of Miami and Mount Dora Christian Academy.  With Eustis coming in, this would most likely be MDCA’s biggest remaining obstacle to an undefeated regular season.  As expected, we got quite a show!

MDC scored first on a drive from Edwin Chatham, then unleashed a 1-2-2 three-quarter court press.  This stymied the Panthers and Eustis rushed shots or turned the ball over on their first few occasions until Bradley Douglas got a steal and slam to put Eustis on the board.  Despite their issues handling the MDC defense, Eustis was down only 6-4 midway thru the opening quarter.  From that point however, the MDC pressure took its toll and the Bulldogs finished the quarter on an 11-4 run to lead by nine at 17-8.

Eustis did a bit better job in the second quarter of handling the press but struggled to make a dent into the Bulldogs lead.  On occasion, MDC would fall back into a man-to-man or traditional zone to force Eustis to run clock.  The Panthers handled this a bit better, but MDC made shots at the other end to keep Eustis a couple of possessions down.  Eustis can point to staying even with MDC in the second quarter as a good sign as the margin at the half was still nine points with the score 31-22.

The adjustments Eustis came up with in the half-time locker room worked to near perfection.  Within three minutes, the Panthers closed the gap to three, 38-35, forcing the Bulldogs to take a timeout and quieting a boisterous crowd.  That MDC timeout was just what the Bulldogs needed.  The changes they made at both the offensive and defensive ends allowed them to re-establish a nine point advantage to begin the final period up 49-40.

The Panthers started the fourth quarter with a 7-0 run to make it a two point contest with 6:17 to play.  Now it was an entirely new ball game.  MDC was able to keep Eustis at bay and led 53-51 with two minutes to play.  A steal and score by Douglas of Eustis tied the game with 1:44 to play.  After an exchange of missed shots and turnovers, Eustis had the ball out of bounds on their end of the floor. A breakdown in the MDC defense allowed Douglas to get open for a three in the corner off the inbounds pass.  He drained it, his first make from behind the arc in seven tries.  Eustis now had its first lead of the game at 56-53 with forty-five seconds left.  The Bulldogs got the ball to Jack Webster (pictured) and he drew a foul, sending him to the line for a one-and-one with thirty seconds remaining.  He calmly made both to bring the Bulldogs to within one.  MDC played for a steal on the inbounds, but Eustis took care of the ball and the Bulldogs were forced to foul to stop the clock and get the ball back with ten seconds left.  The front end of the one-and-one was missed and after MDC finally gained possession of the ball and got it to half-court, they called timeout with just four seconds left on the clock.  Coming out of the time-out, the Bulldogs ran a play for Webster to get a look from the corner for three.  The play worked to perfection as Webster caught the ball, turned and shot in one fluid motion.  The ball splashed thru the net and with no timeouts left, Eustis was unable to get the ball out of bounds and into a shooter’s hands before time expired.  The crowd rushed the floor in celebration of the Bulldogs’ last second 58-56 victory.

With Ransom Everglades loss at around the same time, Mount Dora Christian is now the sole undefeated boys high school basketball team in the state.

The Bulldogs were paced by Webster’s 23 points.  He also contributed 9 rebounds, 2 assists, and a steal.  The 6’5 senior has a football player’s frame but doesn’t play the sport.  His strength allows him to play bigger than his size when it comes to rebounding or defending players in the post.  Webster finished the evening 5-10 from deep, one miss coming on a foul.  His stroke is textbook and he doesn’t need a lot of room to get it off.  He also impressed with his ability to score inside thru contact.  Webster also did a fine job of finding open cutters in MDC’s passing game.  A very good student, he’s a player that Ivies, Patriot League, and high-academic D-IIs should look at to fill out their recruiting class.

Eustis’s Douglas finished with a double-double of 19 points and 12 rebounds, doing all he could to get his team a victory.  He didn’t play the point guard spot, but good things happened for the Panthers when he had the ball in his hands.  As mentioned, he didn’t shoot the ball well from the perimeter this night, but Douglas found ways to score by crashing the boards, finding open gaps in the zone for quick scores, and turning defense to offense with a series of steal and scores.  He’s got a solid frame and good athleticism with an ability to play either guard spot.  Douglas certainly deserves an opportunity to play at the next level.