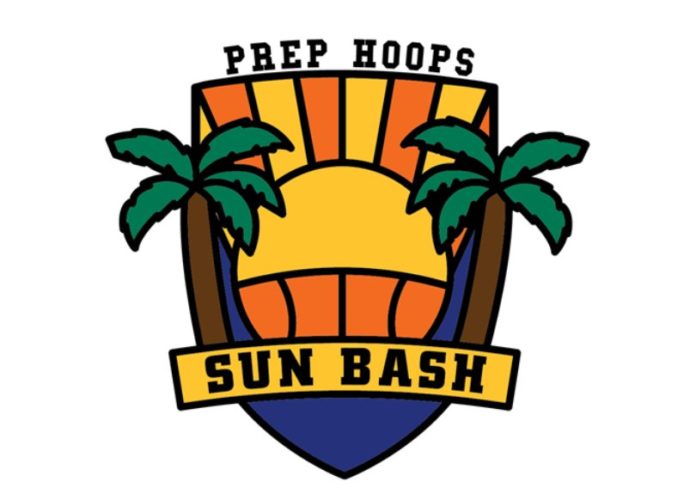 We took in the final day of the Sunbash, held this year at St. Petersburg Northside Christian School.  A three-day, sixteen-team event, the Sunbash does not produce an overall winner; instead, each team is given three games against a high-quality opponent, ensuring competitive contests.  Good crowd attendance also helps to invigorate the atmosphere.

The Indians of Choctaw won’t make this excuse, but they have got to be tired road warriors.  They travelled to Fort Myers for two games in the City of Palms Classic Sunshine Series, travelled home to the panhandle to host their own event, then returned to the road after Christmas to St. Pete.

Choctaw was able to stay with the Chargers of Suncoast early on, trailing only 8-5 after the first four minutes of play.  The margin was seven, 16-9, after the first quarter.  Suncoast continued to expand their lead in the second quarter, even without the services of sophomore standout Stone Bureau, who was nursing an injured hip and tried to give it a go but after taking a hard fall, he was unable to return.  Junior guard Nate Sasser moved over to run the team and did a serviceable job.  In that second quarter, the Chargers charged ahead and built a 34-14 halftime lead.

Ian Smikle led the Chargers with 17 points and 14 rebounds while Sasser tallied 14 points, 13 rebounds, and 5 steals.

Alonso jumped on top in the first four minutes, 10-5.  SWFL Christian didn’t fall any further behind and after one quarter of play, was down just four at 19-15.  The Kings opened the second quarter with a 5-0 spurt to take a 20-19 lead, but it was brief.  Alonso reeled off a 6-0 run of their own to re-take the lead with four minutes left in the half.  SWFL Christian made up some ground the rest of the period but at the break it was Alonso up by three, 31-28.

The Kings tied the game early in the third but couldn’t sustain any momentum and the Ravens of Alonso took advantage, building a 48-38 lead with three minutes left in the quarter.  That margin would build to thirteen, 59-46, entering the final period of play.  SWFL Christian was never able to challenge in the fourth and Alonso would go on to win by a score of 77-67.

The Ravens placed four players in double-figures as Jason Stovall led the way with 20 points, followed by Jacob Tegeler-Hudgins with 19 points, Trent Scott with 17 points and Cole Gingeleski with 10 points to go along with 17 rebounds.

Southeast was late addition to the event after one team had to drop out due to COVID precautions.  They struggled the first two days against Winter Haven and Suncoast.  However, they were ready for the Bloodhounds of Auburndale.

Southeast led just 6-5 after the first four minutes but soon stretched its lead.  It grew to nine at the end of the first quarter and the Seminoles were up double-digits, 32-21 at the break. Auburndale found themselves down as much as eighteen, 43-25, at one point in the third quarter before beginning their climb out of the hole to trail 53-37 with one period left to play.  The Bloodhounds looked like they might make a game of it at the five-minute mark of the fourth quarter, down just ten, 58-48, with momentum on their side.  The good times didn’t last as Southeast was able to hold them off to win by a score of 70-57.

Southeast got a big performance from Karmani Gregory with 30 points.  Malik Banks contributed 20 points to the cause.

Kervin Knaggs led the Bloodhounds with 18 points while Nehemiah Turner tossed in 11 points.

Many thought this would be the game of the day and it lived up to that billing.  Both teams got off to good starts and neither team could grab and hold a lead.  Midway thru the first period the score was tied at 8-8 and after one quarter of play, the teams were tied at 19-19, a furious pace indeed.  With the score tied at 22-22 with four minutes left in the half, Olympia scored six unanswered points and looked to have seized control.  That wasn’t the case as the Cardinals of Bishop Snyder finished the half on a 9-0 run, highlighted by a Jalen Gilmore three to beat the buzzer and take a 31-28 lead at the break.

Olympia grabbed the lead back in the third period, using a 10-4 run in the first four minutes to go up 38-35.  Bishop Snyder hit a three to tie and then the game went back and forth from there.  Entering the final period, Bishop Snyder held a tenuous 44-42 advantage.  The Cardinals increased their lead to 50-44 in the fourth, resulting in an Olympia timeout.  The Titans tied the game, but with four minutes left, Snyder had regained the lead, 51-48, and began to milk the clock.  Olympia had their chances to tie, missing a pair of three-point shots.  With twelve seconds left, Olympia had to foul to get the ball back but only had three team fouls.  They would finally put Bishop Snyder at the line but there were only eight second left in the contest.  Snyder hit both and Olympia rushed down court and scored a bucket with three seconds left.  Snyder didn’t need to take the ball out of bounds and the Cardinals would win a close one 55-52 to give Olympia its first loss of the season.

Snyder was led by Moise Balungu with 19 points.  The Cardinals also got 18 points from Gilmore and 10 points from Trent Walker.

This game began the “local” session and the Clearwater fans turned out.  Thought NBP was playing without 6’8 junior Guillerme Tesch as he injured a hand the previous game, the Eagles still had an overwhelming size advantage.

They took advantage of that advantage quickly, building an early 8-2 lead and up fourteen, 21-7, after the first quarter.  To Clearwater’s credit, they didn’t let NBP get any further ahead and the score was 31-17 at the break.

NBP opened the third period with a 10-2 run to take a 41-19 lead with four minutes gone by.  Clearwater was able to muster up some buckets and get the margin back to fourteen, 45-31, going into the final period.  The Tornadoes of Clearwater almost made it back, trailing by ten, 53-43.  However, only 1:15 remained in the contest, so there simply wasn’t enough time for Clearwater to finish the comeback.  NBP would go on to win by nine, 60-51.

The Eagles were led by Max Fuentes with 20 points while both Justin Abson and Adren Roberts each scored 15 points.

St. Pete had lost a tough battle with Olympia the night before and had a quick turnaround to face a talented Winter Haven squad.  Early on, the Green Devils of St. Pete showed no ill effects and grabbed a 9-8 lead early and built their lead to 18-12 after the first period.  The Blue Devils of Winter Haven were undeterred and tied the game at 20-20 with just under four minutes to play in the second quarter.  Their momentum continued for the remainder of the period and at the break, the Blue Devils were up 29-21 over the Green Devils.

In the second half, it seemed St. Pete had run out of gas.  They were able to stay with Winter Haven through the third quarter but midway thru the final period, Winter Haven had gone on a run and built their margin to 58-40.  The Blue Devils would go on to win by fourteen, 67-53.

Isaac Celiscar led Winter Haven with 19 points while both Dylan James and Jamie Phillips tossed in 15 points each.

The host school brought out the fans and it clearly gave the team a jolt of energy to start the contest. The Mustangs built a ten-point lead in the first period and led 17-9 heading in to the second quarter.  Berkeley slowly chopped away at the margin and got to within three, 23-20, with 1:30 left in the half.  Northside would hold on to lead by four, 27-23, at the break.

The Mustangs led 33-29 with four minutes left in the third but a Berkeley run gave them a 34-33 lead just thirty seconds later.  Now it was Berkeley that had momentum and they led by four going into the final period, 41-37.  Early in the fourth period and up one, Berkeley’s stalwart C.J. Hawkins picked up his fourth foul and went to the bench.  Northside wasn’t able to take advantage and when Hawkins returned to the game, Berkeley still had the lead.  He wasn’t in the game long.  Hawkins fouled out with 1:18 remaining and Berkeley clinging to a 47-45 lead.  Northside hit one of two free throws to get to within one on its next possession but Berkeley hit two free throws of their own in response.  That would be as close as Northside would get.  Berkeley would hold on at the free throw line to win 54-49.

East Lake graduated a lot of talent from last year’s region finalist and was looking at a challenge in a Calvary team that has been playing well.  Initially, that challenge looked to be too great as East Lake fell behind 7-1 early on and 14-8 after one quarter of play.  Calvary put their collective foot on the gas in the second quarter.  They built their advantage from six to fifteen to lead 34-19 at the break.

Calvary got a little too comfortable with that margin in the third quarter.  East Lake sliced a 44-29 deficit midway thru the period to just seven, 44-37, entering the fourth quarter.  However, East Lake would get no closer.  Calvary would maintain that type of lead until the end, winning by ten, 58-48.

Calvary was led by Canaan Burnett with 19 points while Daniel MacGregor added 18 points.