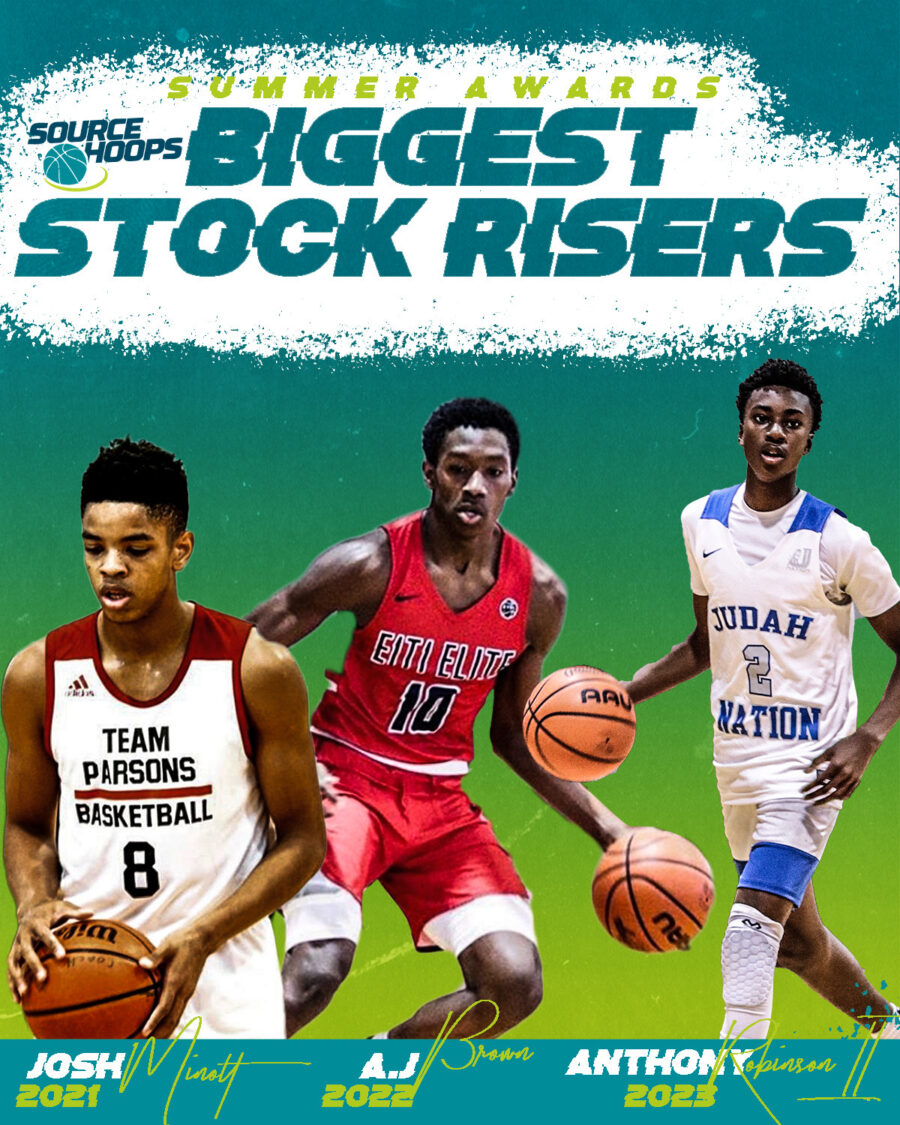 This category is annually the most challenging.  This year it was particularly difficult to narrow down a lengthy list of very worthy candidates in each class to just one nominee.  These are the players that made the most of their opportunities, resulting in a significant increase in their recruiting profile.

The 6’8 senior take a massive leap in the national rankings, going from barely inside the top 100 up to a top 40 (or better) recruit.  Ultimately, Minott cast his lot with the University of Memphis, with Tigers’ Head Coach Penny Hardaway comparing Minott’s game to his own back in the day.  He has a full package of skills at both ends of the floor.  At his size, Minott is an excellent ball-handler and passer, routinely finding teammates while out on the perimeter or on drives to the rim for easy shot attempts.  His perimeter jumper can be streaky, but Minott has a quick release and is able to get it off while contested.  With is size and skill, he can post up or shoot over smaller defenders or drive by bigger defenders to make plays at the rim.  With his length and foot speed, Minott is a versatile and unique defender.  He covers a lot of ground quickly to make steals, block shots inside as well as on the perimeter and has the ability to grab rebounds, push the ball up the floor, and lead the break to a successful completion.

The 6’5 junior significantly elevated his game this summer.  So much so that it wouldn’t surprise if he became the go-to scorer for what should be a very good Orlando Christian Prep squad this winter.  Brown simply knows how to score and make winning plays in crunch time.  Whether he manufactures points with drives to the basket or perimeter jump shots, takes advantage of the defense by beating it down the floor in transition, or gets opportunistic points thru offensive rebound baskets, it is difficult for the defense to slow Brown down, let alone stop him.  Brown’s quickness and ball-handling have greatly improved and so has his ability to get by the defense with just one or two change-of-direction/change-of-pace moves.  Brown is also a solid defender and rebounder.

The 6’1 sophomore brings a solid and steady presence to the point guard position.  A slender guard with a variety of offensive skills, he scores from all three levels with consistency.  Robinson is quick with the ball, does a good job of breaking down the defense off the dribble and makes the right reads when it collapses to stop him.  He has the ball on a string and isn’t phased by extended defensive pressure.    He also is a respectable shooter to the three-point line and beyond.  Robinson has quick hands and feet on the defensive end and causes several tips and deflections during games.