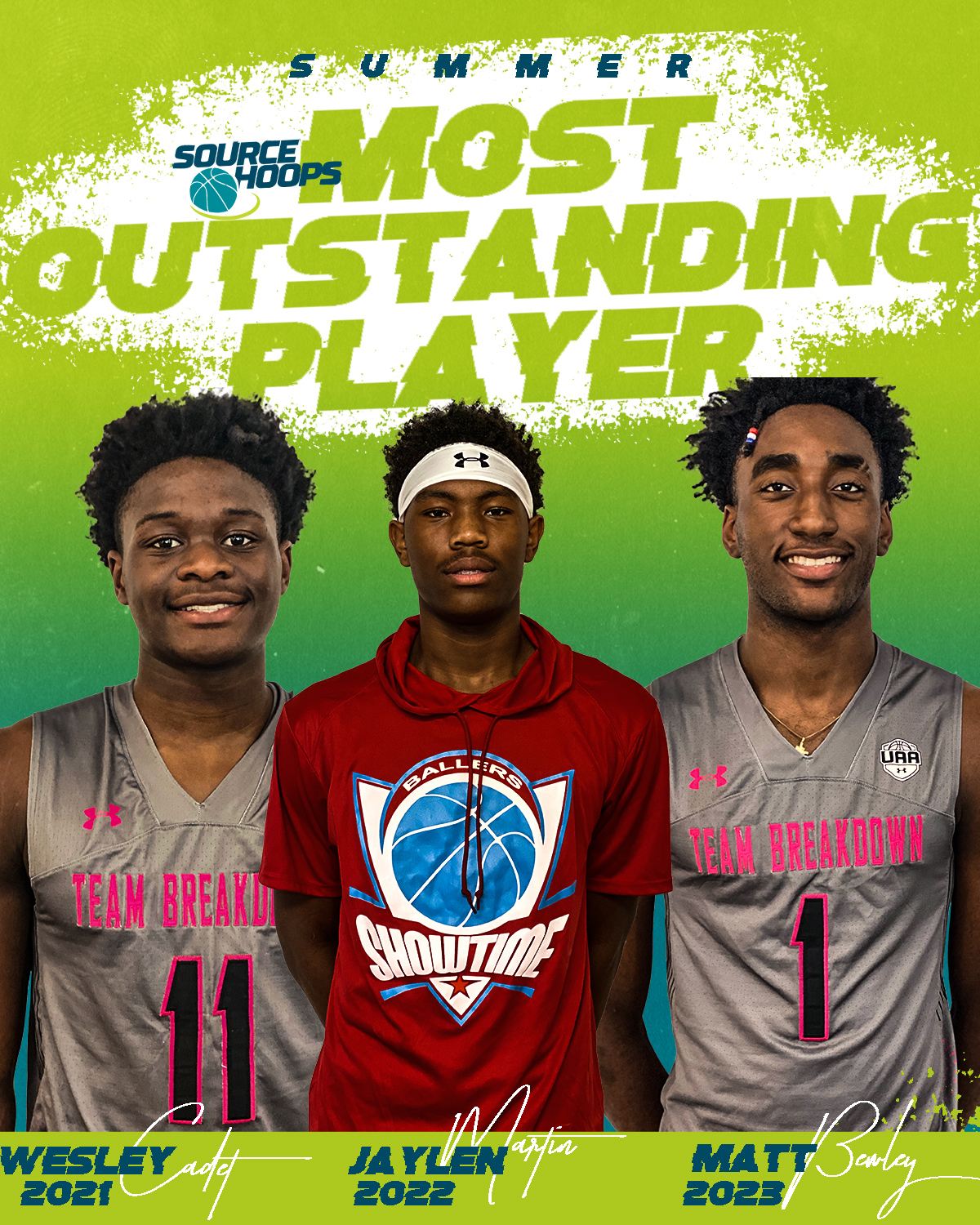 There is no doubt that 2020 has been the strangest year in recent memory, basketball or otherwise.  With no “Shoe Circuit” events, travel fears, and the need to social distance, the COVID pandemic nearly eliminated off-season basketball at the grassroots level.

Fortunately, creative minds were able to make things happen around June with the enforcement of limited attendance, mandating the wearing of face masks, disinfecting player and spectator areas after each game and the streaming of games to college coaches.  Eventually, by the Labor Day weekend, enough basketball had taken place to give out some awards. The first category is Most Outstanding Player in each age group (Classes of 2021, 2022, and 2023). The MOP is simply based on who performed the best regardless of team success.

Whether performing at individual showcase events such as the Source Hoops Stock Risers event in the spring before the COVID shutdown or with Team Breakdown at both Showtime Ballers Roundup events after the “re-opening”, the 6’6 senior impressed at every stop in the spring and summer of 2020.  Physically tough, Cardet plays hard every possession, is highly competitive, and a talented two-way player.  On the offensive end, he is very confident and has the ability to score in a variety of ways from all three levels.  While he may be at his best when he can get going downhill to the basket where he is able to finish with strength and creativity through contact in a crowd, Cardet is a reliable perimeter scorer both inside and behind the three-point line.  He is also a solid ball-handler and passer as he makes the right reads with the ball in his hands, especially when the defense collapses to stop his forays to the rim.  Cardet defends with determination, relishing the challenge of guarding the opponent’s best player.

The 6’5 junior has made great strides in his overall development this off-season, making Martin a high-priority target for college coaches.  Playing on both the 17U and 16U levels at various events around the state and the nation late in the summer, Martin displayed an ability to score points in bunches in a variety of ways.  He has developed into a multi-level scorer with a good understanding of when to shoot, drive, or pass to make the best possible play.  Martin excels inside the arc as he consistently gets to the basket and finds ways to score in a crowd, often earning trips to the free throw line.  He has also become adept at pulling up and knocking down mid-range jumpers as well as floaters in the lane.  Now a reliable three-point shooter, Martin has become one of the more difficult covers at the high school level.  Athletic and active, he also puts in effort on the glass at both ends.

Watching the 6’9 sophomore play, it is just extremely difficult to believe that he has three more years of high school left.  He is a prototypical player for this age of basketball as he has length, excellent run/jump athleticism, and skills that allow him to play inside or out.  Bewley is a solid straight-line ball-handler and if given an opportunity from the high post or short corners will get by defenders with a dribble or two and finish well above the rim.  Despite a hitch in his shot, he is a consistent perimeter shooter to around sixteen feet and will knock down the three on occasion.  Bewley has a quick first, second, and third leap for rebounds, and fiercely challenge opponents in the paint.  His quickness, wingspan and lateral foot speed allow him to defend any player of any size anywhere on the floor.  Bewley plays more like a collegian than a second-year high school player.