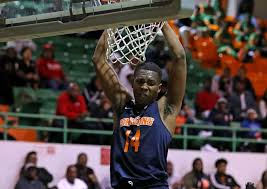 The 6-foot-7 2020 standout was named to the Class 4A first-team All-State squad. Legiste averaged 11.9 points, 7.8 rebounds and 1.5 blocks as a senior for coach Terrence Williams.

“First I would like to thank God for putting me in the position I’m in,” Legiste said by direct message. “I’ve pushed myself to limits that I couldn’t even have imagined and thank my coaches and teammates for being there for me. I was blessed to have many schools recruit me and I don’t take any of it for granted. At the end, it came down to two great schools being Tusculum University and Anderson University. It was a hard choice between the two.”

Legiste helped Stranahan to the Class 6A state title as a junior and the 4A crown as a senior.

Last month, the Dragons post scored 16 points and pulled down 8 rebounds in the 71-64 state championship victory over Tampa Catholic. He put up 12 points — on 5-for-5 shooting from the field — in a 59-54 win over Jacksonville Paxon in the semis.

“Tusculum will be my home for the next few years,” Legiste added. “The reason I chose Tusculum is because I feel the coach really believes in my game. He’s been recruiting me for a long time and has patiently waited for my decision with no problem. I feel that when I attend Tusculum I will be a big part of the team right away and I love the direction the school is heading in. Going out of state will be a huge step forward in my growth as a player and a man. I wouldn’t want to do it with any coach other than Coach [J.T.] Burton.”