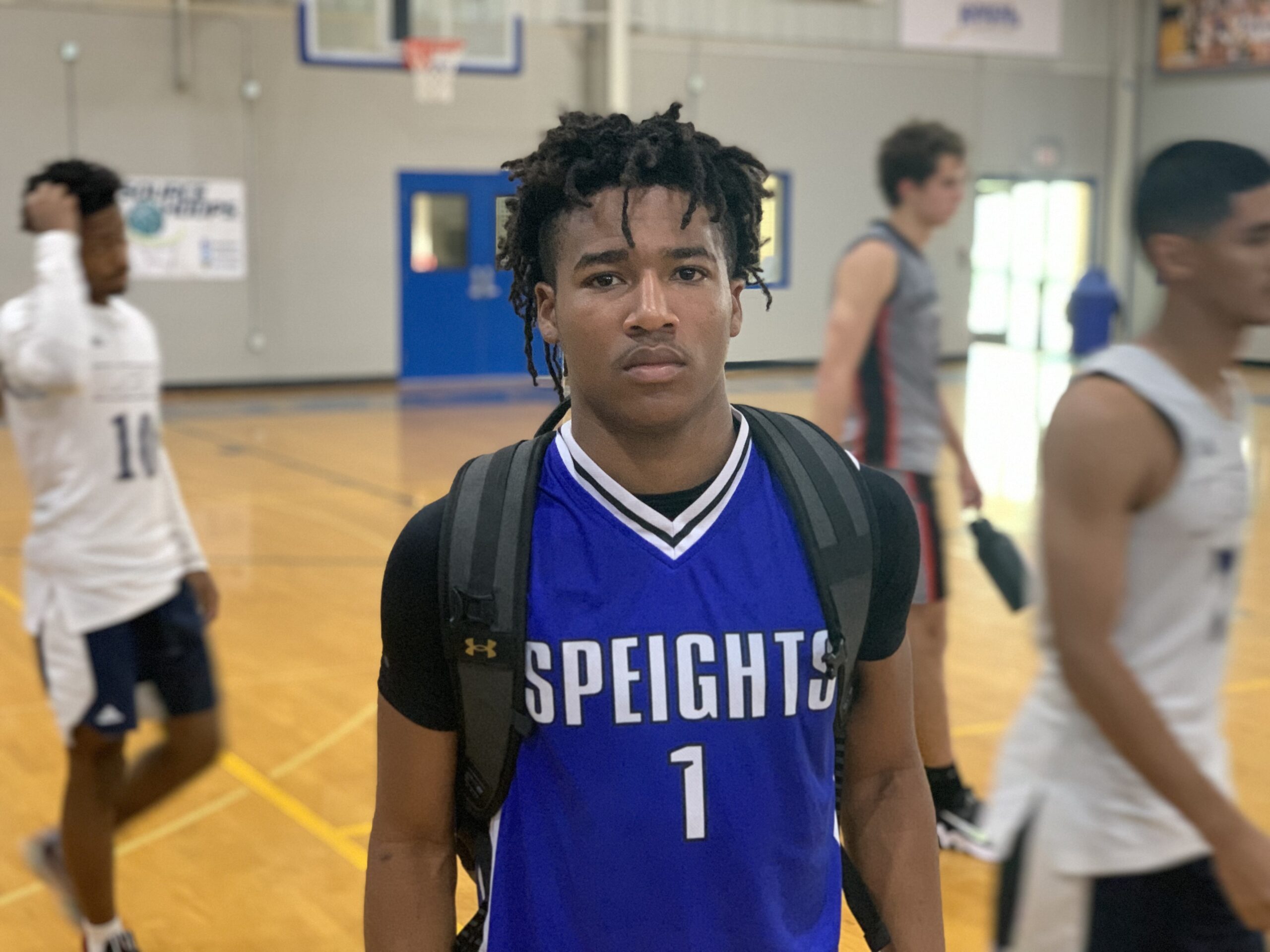 Caleb Kyzer, CP 25 NWFL: The 6’0 junior from Fort Walton Beach was solid in his point guard role on Saturday.  He took care of the basketball, controlled the tempo, and knocked down open shots from beyond the arc.  Kyzer made good decisions on the move, kept his teammates involved, and was a pesky on-ball defender.  He may not wow onlookers with blinding speed and quickness but he more than compensates with savvy and smarts.

A.J. Wright, Team Speights 17U: A 5’11 senior out of Speights Academy in Tampa, Wright is a blur with the ball and a lot of good things happen when the ball is in his hands.  Wright shot the ball particularly well from distance on Saturday, going 3-3 in the game we took in.  He pushes the pace, gets to the basket quickly, and scores well in traffic.  A very active defender, Wright is not only vigorous in guarding the ball but also is disruptive in the passing lanes.  Despite his size, he rebounds the ball well.

Greg Maxwell, Team Speights 17U: A 6’2 junior from Ocala Trinity Catholic, Maxwell was a late arrival to the game and didn’t play until the second half.  He made up for lost time very quickly, displaying deep shooting range off the catch as well as coming off ball-screens.  Maxwell also showed an ability to get to the basket if overplayed for the perimeter shot and score in traffic, completing a couple of “and one” opportunities.  A solid athlete, his game is such that he can play either guard position and make a positive impact on the game.

C.J. Kearns, Team Anderson: A 6’7 sophomore at Rockledge, Kearns kind of sneaks up on you and before you realize it, he has impacted various areas of the stat sheet.  He is a reliable scorer from fifteen feet and in, a decent passer out of both the high and low post areas and runs the floor for scores.  Still developing physically, he is wiling to take his lumps inside in an effort to get to the free throw line, where he connects at a high rate.  A solid rebounder on the defensive end, Kearns is quick to outlet the ball and get up the floor.  Defensively he will challenge shots and play physically in the post if necessary.

Jackson Huxtable, Game Speed Elite 17U: A 6’7 senior out of the Montverde College Basketball Development program, Huxtable probably had as good of a performance on Sunday morning as any player had this past weekend.  He drilled shots from the perimeter, showed scoring skill and touch inside, and made some nifty passes for assists.  Huxtable rebounded his area and was a bit of a surprise with his ability to block shots.  His high basketball IQ offsets any perceived lack of athleticism.  If what he showed on Sunday is the norm for him, Huxtable will have plenty of opportunities to play at the next level.

Tavion Cook, Lehigh: A 6’1 sophomore, Cook is solidly built and very athletic.  He gets by on those two factors more than skill at this point but he is very productive.  Cook scores best in transition or when driving to the basket and overpowering opponents in his way.  He isn’t above being a mini-Moses Malone and missing a shot on purpose in order to grab his own rebound and get a better shot.  Cook missed the couple of perimeter jump shots in the game we took in, so that is his next area for development.  As one might expect, he rebounds well due to his physical gifts and anticipates well on the defensive end.

Gene Alvin, Lehigh: A 6’7 junior, Alvin is physically a man amongst boys.  No doubt Dabo Sweeney or Nick Saban would give him a try at tight end if Alvin played football.  While a bit like teammate Cook but taller, Alvin at least showed a semblance of a perimeter shot.  However, he is best when he operates inside, putting back misses or overpowering opponents once he gets the ball in the lane.  Alvin is quick to get out in transition and finish above the rim.  No doubt there is some skill work to be done but he has all the physical tools needed to be successful.

Trent Lincoln, Pro Holmes 17U: A 6’0 junior from Tampa Wharton, Lincoln is an explosive point guard with a penchant for making highlight reel plays in transition.  With a hefty vertical, he turns open court steals into showtime, igniting both the crowd and his team.  Very fast with the ball, he is quick to get by his defender, collapse the defense, and either score at the rim or find a teammate for an easy shot.  Lincoln makes good decisions on the move with the ball, connects on open perimeter shots, and is a harassing on-ball defender.

Carey Davis, Team MOAM 17U: A 6’2 junior from Wekiva High School near Apopka, Davis was scintillating in his ability to explode past defenders and score in traffic with a variety of finishes.  Both strong and quick, once Davis gets a defender on his hip, it is a bucket or a trip to the foul line.  Davis made his perimeter shots from inside the arc and behind it early in the contest but his success rate dropped a bit later on.  Still, he must be defended on the perimeter, which sets up his drives.  Davis has no problem getting in the paint and mixing it up with the big boys when it comes to securing rebounds.  He is also an active defender that anticipates well and disrupts the passing lanes.

Aiden Fletcher, Team MOAM 17U: A 5’11 junior that played in the Montverde College Basketball Development program last season, Fletcher got off to a bit of a slow start to the game we took in on Sunday but got better and better as the game progressed.  He used his speed and quickness to get by defenders and score at the basket and also unleashed a pretty solid jump shot from inside the arc.  Fletcher made good score vs. pass decisions in transition and seemed to have a good knowledge of when to push the pace and when to pull back.  He also proved to be a nuisance when guarding the basketball.

Krishin Atwal, Team Beatty 17U: A 6’5 junior at Trinity Prep in Winter Park, Atwal has long been known as a perimeter sniper with deep range.  He has gotten stronger over the past year and that has improved his ability to put the ball on the floor, score in traffic and rebound against bigger opponents.