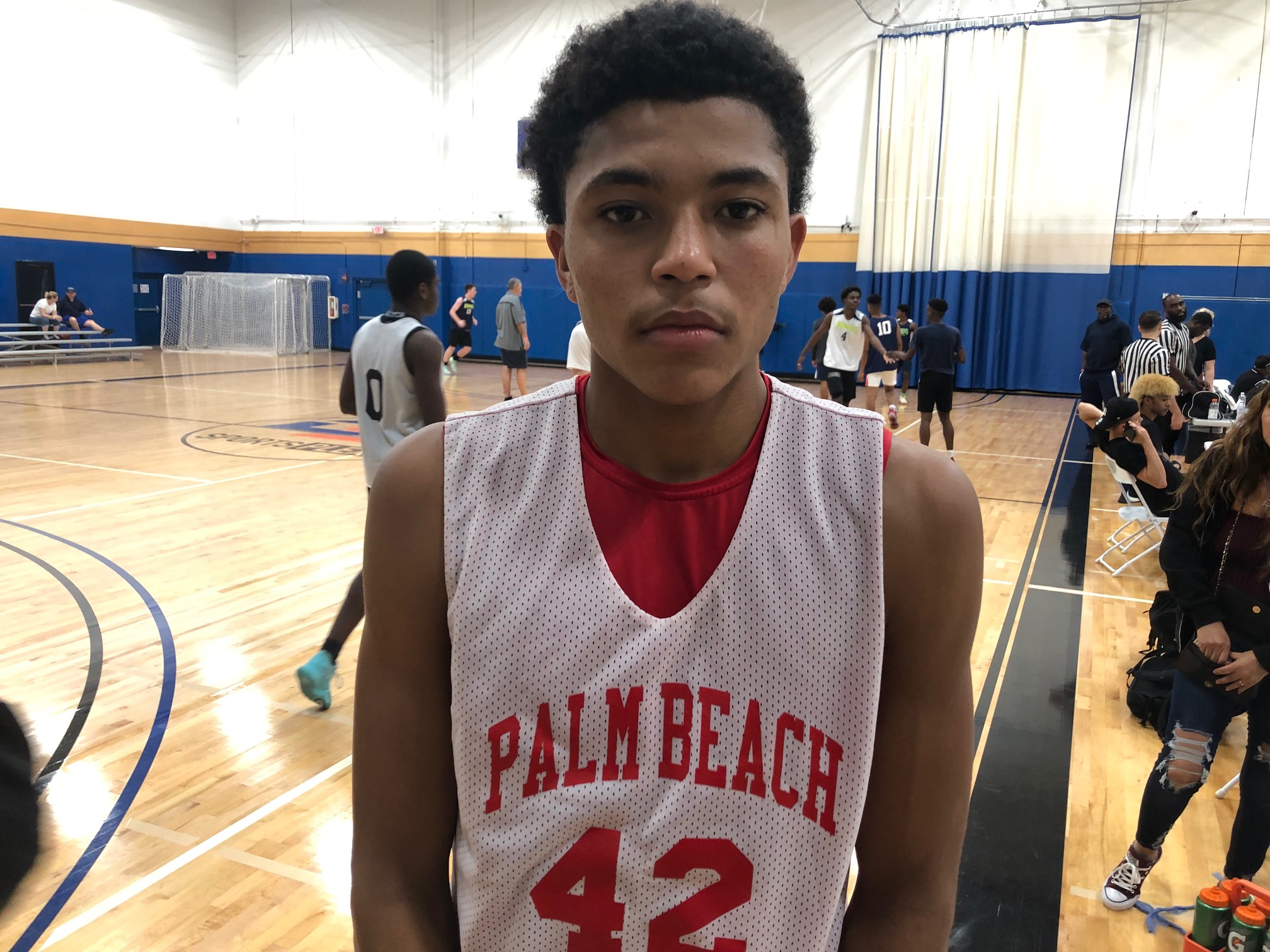 The Source Hoops Fall Showcase made for an entertaining Saturday at the DS Sportsplex.  Several quality teams from South Florida participated and there were several solid individual performances.

Devin Carter, Doral: The 6’4 senior guard had a break-out spring and summer and continued his high level of play on Saturday.  He has three-point range on his jump shot, but was at his best when he was able to create space using ball-screens or change of direction dribbles to get off a deadly mid-range shot.  Carter has the ability to finish above the rim in a crowd and proved that on Saturday.  Maybe most surprising was Carter’s passing ability and court vision as he garnered many assists in Doral’s motion offense.  A crafty offensive rebounder, Carter elevated quickly in traffic to get some put-back points.  He is getting a lot of high-major attention, and it is well deserved.

Dillon Canoville, Fort Lauderdale Calvary Christian: The 6’6 junior exploded on his opponent in the opening game of the day.  Canoville is well-built and an explosive leaper.  He used these physical gifts to dominate the glass at both ends and finish in transition with authority.  Offensively, he scored mostly around the basket but Canoville did show that he can put the ball on the floor for a dribble or two from inside the arc and quickly score in the lane.  He is also a factor on the defensive end with the ability to block shots around the basket or anticipate passes on the perimeter and head the other way for easy buckets.

Erik Pratt, Lake Worth Park Vista (pictured above): The 6’3 senior guard was a revelation on Saturday with his ability to produce at either guard spot.  He handled the ball well against various defenses in the games we watched, was quick to get the ball to open cutters in the lane, and made good decisions with the ball on the move.  Pratt proved to have deep range on his jump shot, going 7-11 from beyond the arc in one contest, including an “and one” opportunity.  He doesn’t come across as being a speedster with the ball but he is quick and fast enough to get where he wants to go on the court.  Pratt has long arms and is adept at grabbing rebounds and pushing the ball up the floor to start the transition game.

A.J. Lopez, Miami Schoolhouse Prep: The 6’4 senior wing made a mockery of most defenders at the Showcase.  He’s got a quick-as-a-blink first step, long strides, and elevates to finish before defensive help can come.  Whether driving the baseline from the corner or attacking the paint from either side of the floor, it didn’t take Lopez more than a dribble or two to jet by his defender and score at the rim.  While his perimeter shot didn’t fall with regularity on Saturday, he has good mechanics and will make them when given some time and space.  Lopez is a quick leaper and routinely out-rebounds bigger opponents.  He also excels at converting turnovers into points.

Matthew & Ryan Bewley, Oakland Park Northeast: It is still hard to believe that the 6’9 brothers are freshmen and have yet to play an official high school game.  Not only is each advanced athletically but their skills are better-than-expected for young players of their size.  Each has a respectable perimeter shot, handles the ball well in the open floor, and works well with the other in high-low post situations.  Remarkably quick and agile, they anticipate the passing lanes well on defense, are active shot blockers, and get up and down the floor swiftly in transition.  The only knock on them right now may be a lack of strength and finishing ability in a crowd, but that should be resolved as each physically matures.